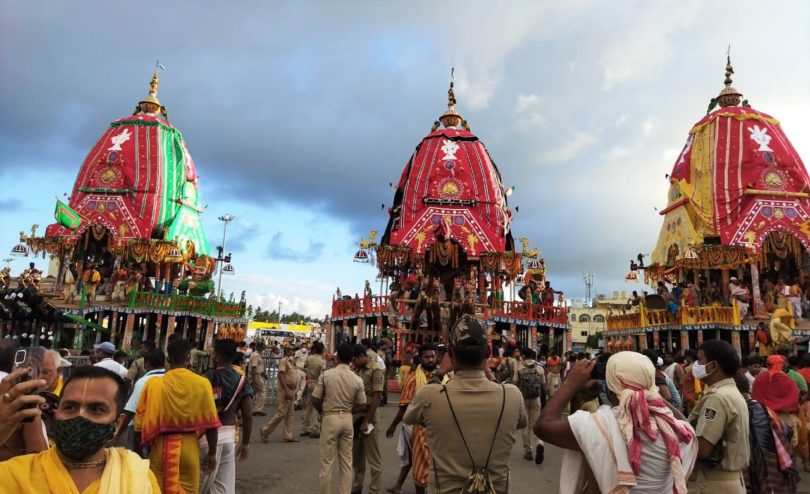 Festivals come every month in India, offering a fun, colorful torch of hope for people to help them get through difficult times.

But underneath the visuals of the gathered crowd, danger lurks.

Children and women can easily become victims to disgraceful acts of sexual assault at the hands of strangers who stay hidden behind the masses under the pretext of celebration.

Once you’ve experienced the sudden grasp of unwelcome hands and lost the feeling of excitement that a festival should provide, that shadow hangs overhead every time a crowd gathers.

When it happens to you, the colorfully bright fairs don’t stay the same. That’s how it’s been for me for the last eight years.

Rath Yatra, a festival involving hand-pulled chariots, is an age-old and popular festival in Odisha, India’s eastern state. It involves the most celebrated ancient gods of the Odia people and is popular with people from all over.

Every year millions of people gather in Odisha’s small town of Puri, where Rath Yatra commences. As long as I can remember, my family has attended the festival in Puri, which also happens to be my mother’s childhood home. It’s her favorite celebration, and we reunite with our cousins and enjoy the festival and the fair that follows it.

Lost in the excitement, I loved to immerse myself fully in the divine atmosphere. As a little girl, I walked through the crowd with my mother, who told me countless times never to let go of her hands or I would get lost.

Alongside those warnings, I now suspect she had a hidden fear that she was unable to explain to me. In my childhood innocence, I never noticed.

When I was in seventh grade, something happened that changed my festival experience forever.

We were at my aunt’s house and I was bored so I asked my aunt to take me to the fair. But my aunt was busy, so I convinced my elder sister and a cousin to come with me.

Even after receiving a lot of warnings not to go to the fair all by yourself without an elder we three managed to get out.  After walking almost three kilometers we finally reached the place where the statues of the gods were placed for people to visit and pray.

While we three were praying, a huge crowd of people quickly gathered around us. The crowd became uncontrollable fast. People started to push each other to have a good view of the god’s face from his chariot.

Being short, I was getting tossed around in the whirlpool of people and it was getting difficult to breathe. As we three were struggling to get out, a hand suddenly grabbed my butt cheeks and didn’t let go.

Shocked by this assault, I started to tremble like a fish out of water. That hand was not letting me go.

Taking advantage of a hefty and rushing crowd, someone – whose face I never saw – scarred me for a lifetime and gave me unshakable memories I wish I never had.

Every year India celebrates hundreds of such festivals where crowds are inevitable. Most people take this opportunity to spend some time with their families and rejoice in their traditions.

But some use these cultural celebrations as a chance to molest women and children who, in the chaos, become victims with no idea of who did this to them.

Because the identity of the assailant is so hard to determine, the victim finds herself in utter helplessness.

The use of crowds as a medium of molestation has been around for quite a long time in India.

After I was assaulted and told my cousins about it, they told me they had also been attacked at the festival, too. They told me it happens every year and is outrageously common.

Women are intentionally pushed, pressed to walls and grabbed almost every time they are surrounded by a crowd. Not only this is common in festivals but in every possible place where crowds get formed.

These unforeseen attacks involving grabbing and manhandling of private parts in public ruins the victims’ attitudes toward public events. It can also cause a phobia of crowds.

Girls who become victims of such acts are scolded and blamed if they get groped at public events. Most of the time victims are blamed for these assaults because the actual abuser is impossible to locate.

This happened to me, too.

My mom and some of the other women in the family berated me for not listening to them and running away to the festival without an elder. They cautioned me not to go out alone again.

Sexual assaults at India’s festivals are largely ignored. A quick search found news reports of assaults on public transportation but not at festivals or fairs, where there is clearly a problem.

This sad truth is known only by the victims who experience it.

But if these victims voice their stories for others to know, then there is hope for change.

Purnima Priyadarsini is a Reporter with Youth Journalism International.