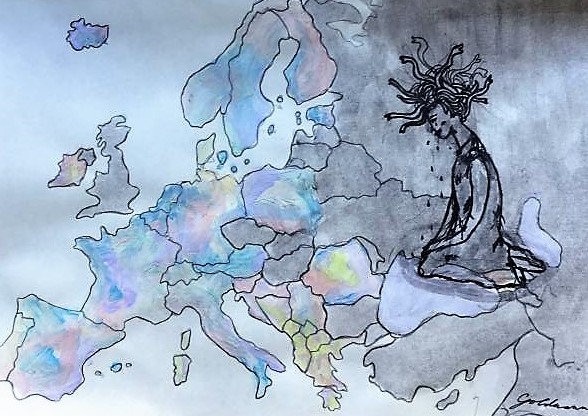 The mythical Medusa, herself a survivor of sexual assault, weeps over the map of Europe which shows the nations that have ratified the Istanbul Convention in color and those that have not in gray. (Viktorie Goldmannová/YJI)

With the aim of combating, raising awareness for and preventing sexual and domestic violence against women, 45 European countries signed the Istanbul Convention in 2011.

After 2011, the individual countries took years to ratify the human rights treaty.

The progress the Istanbul Convention brought for victims of sexual violence differs strongly depending on the country.

This violence is defined as physical, sexual violence as well as psychological violence and harassment, according to the Directorate-General for Justice and Consumers of the European Commission.

Between 20 to 25% of all women in the European Union have experienced physical violence at least once in their lives, according to UN Women, the entity at the United Nations dedicated to gender equality and women’s empowerment.

UN Women is a strong supporter of the Istanbul Convention.

Under the Convention, nations must change their laws and policies to better protect women from violence both in and outside the home, according to UN Women.

It “focuses on removing obstacles that could prevent someone from reporting a crime, granting police power to remove perpetrators from the home, ensuring access to information for victims, and it requires the provision of services to survivors, including shelters, telephone hotlines, specialist support services, crisis centers, and legal assistance,” according to UN Women.

The Convention also addresses the laws around sexual assault and violence against women, their prosecution and criminal penalties. It also requires nations to train professionals to educate on the issue, to better serve survivors and to create programs to treat perpetrators, according to UN Women.

Marija Pejčinović Burić, the Secretary General of the Council of Europe, emphasized the importance of the Istanbul Convention in 2020 when discussing the increasing incidents of domestic violence during the pandemic.

The European Commission also says that “gender-based violation is a brutal form of discrimination and a violation of fundamental rights.”

Turkey was the first to ratify the treaty in 2012, followed by 34 other countries. Ten of the involved countries have yet to ratify it.

Turkey hosted the Istanbul Convention and ratified it, only to rescind the protections this year.

The German Ministry of Foreign Affairs claims that the Istanbul Convention has been successful despite many challenges: talking about violence against women and domestic violence, strengthening gender equality and fighting sexism.

During the pandemic, women and children should be especially protected, since the weakest often suffer most during hard times, according to Heiko Maas, the German Minister of Foreign Affairs.  Germany ratified the Istanbul Convention in 2017.

Annalena Stache is a Reporter with Youth Journalism International. She wrote this story.

Viktorie Goldmannová is a Junior Reporter and Senior Illustrator with Youth Journalism International. She made the illustration.