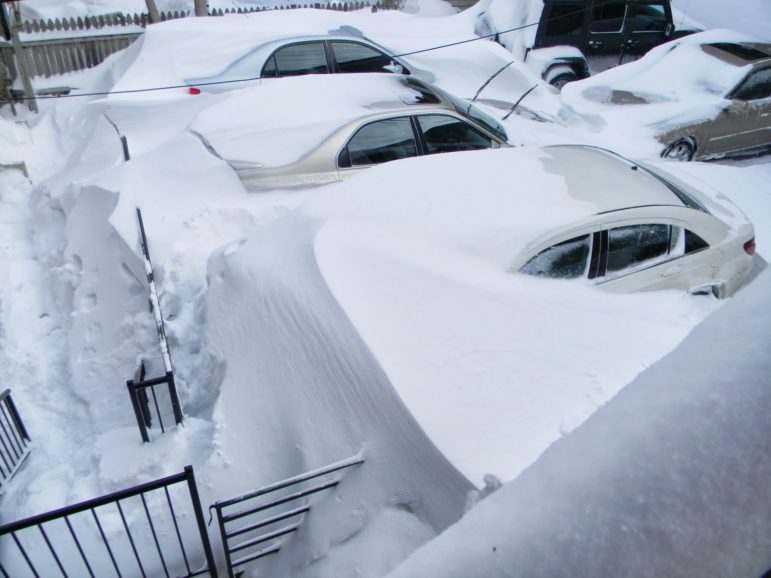 Cars buried in snow in the University Village neighborhood on Chicago’s West Side. (Nicole Reyes/YJI)

CHICAGO, Illinois, U.S.A. – I woke up this morning to the roar of car engines and the slow pace of shovels digging into the snow.

It was eight in the morning, and before I had the time to panic at the thought of being late for school, I felt a chilly breeze and remembered that it was closed
for the day because of the weather.
Outside my window I can see a blanket of white that seems to be growing each hour. The snowman my brother built last week is gone and is probably far away, flowing in what the weatherman calls a “polar vortex.”
Before today, I thought I had already experienced extreme cold, but apparently I was wrong. For the average Midwesterner, it’s times like today where the “really
cold” winter that takes place every year takes on a new meaning.

This isn’t the usual snow day. In years past, when school closed because of theweather, I used it as an excuse to turn my backyard into a playground.
Knowing that the snow is completely untouched makes a little part of me want to run outside, but that idea is extremely ridiculous given the headlines on the news.
The temperature is nearly 15 degrees below zero on the Fahrenheit scale and according to the National Weather Service forecast, strong winds of 20 miles an hour or more could mean temperatures as low as 45 below zero in my city, the lowest in nearly 20 years.
This kind of cold is “potentially life threatening,” the forecast said, and frost bite and hypothermia can occur “in a matter of minutes.”
The term “polar vortex,” which refers to Arctic air that moves south, is not something I hear every day, and it’s never been something I ever thought I’d experience.
On a normal winter day, Chicago is vibrant, lively, and seems as if it would stop for nothing. Today, the streets are heavy, empty, and it seems as though the snow is shining brighter than the city’s skyline.
Now that the snow has stopped falling, the only movement going on outside is the swaying of the trees. Having lived in the city my entire life, I know this is a rare sight.
Since the snow is preventing me from stepping foot outside, I try to imagine what the rest of Chicago looks like and see a nearly frozen river, fog surrounding our skyscrapers, and thousands of other teenagers my age admiring the view from their windows.
As I look outside, I see that my neighbors have given up trying to get their cars out of their parkway. I no longer hear the roar of car engines, but the shovels are still digging in the snow.
The entire town has come to a halt, stuck in the middle of Arctic winds. Despite the harsh weather, it is calming to see a restless city in a moment of peace.
Nicole Reyes is a Junior Reporter for Youth Journalism International