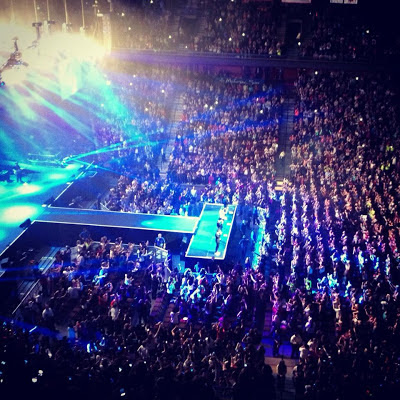 By
Simone Tucker
Junior
Reporter
Youth Journalism International
UNCASVILLE,
Connecticut, U.S.A. – I
had never seen so many people in one arena as I did at One Direction’s incredible
sold out concert Friday at Mohegan Sun.
The screams of
the devoted ‘Directioners’ were insane when the boys finally came on the stage.

The band
performed a lot of their old songs from their first album, Up All Night, and a couple of new tunes from their Take Me Home album released in November.
They sang “Up All Night,” “Moments,” “Live While We’re Young,” “Little Things”
and “I Want.”
Of course, the
boys from One Direction – Harry Styles,
Niall Horan, Louis Tomlinson, Zayn Malik and Liam Payne – also delivered their
most famous song, “What Makes You Beautiful.”
I really enjoyed “Little
Things,” co-written by Ed Sheeran. When they sang this piece, the boys all sat
on the edge of the stage and Horan accompanied the group on his guitar. It was wonderful
because it was such a tranquil song compared to their others.
Since their
previous album, the guys have grown and matured. They still write a lot of
songs about love and the typical teenage situations. During the concert, fans
tweeted questions and dares for the boys to do. One dare asked which one of the
boys from One Direction could kick their leg the farthest!
Another fan
wanted to know what the strangest dance move the boys could do that no fan has
seen before. It was quite entertaining to see them doing something other than
singing on stage.
It was also
really interesting how technology is used now on music venues or situations.
Every single one of the boys from One Direction has such great singing
abilities. It was so interesting to hear them live on stage because I could
actually distinguish each and every one of their voices, in real life.
Malik’s voice
stood out to me the most. He took such high notes and held them out for so
long. He really completes the band in such a positive way.
This amazing
concert was about two hours long, but I wish it was for many more!
I am so happy to
see musicians doing what they love and I am so proud of One Direction for
making it this far in the music world. They made it so far that they are
selling out arenas in less than 30 minutes.
The music
industry is not easy to get into, but they made it, and I wish them all the
best.