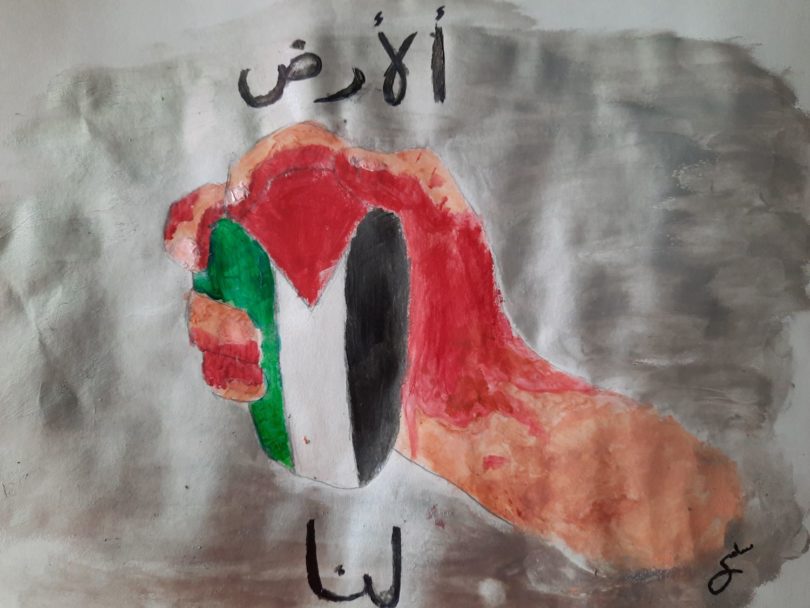 Translated to English, the Arabic inscription reads, "The land is ours." (Salma Amrou/YJI)

Rocks are a fixture of this earth, layers and layers of minerals formed over centuries. They are the surface that we stand on, the history lessons that we study yet ignore when we are most in need. They are the witnesses of an era come and gone, they are the bearers of empires at the rise and the ruins of civilization at the fall. They are a mirror of their environment, a reflection of our identities.

Now, picture the bloodstained hand throwing the rock, pelting its aggressors. Not in abandonment of its identity – far from that. But in the declaration of it, in the clear message: This is me, this is my home, and there’s more where that came from.

The mainstream media will call it terrorism. It will twist its rhetoric and describe the narrative in all sorts of convoluted ways, painting it in shades of murky gray. But this was never gray–since the dawn, it has only ever been black and white, a stark contrast between the oppressor and the oppressed, the killer and the killed, the criminal and the innocent, the coward and the brave.

The automatic rifle and the rock.

They will depict the situation as a religious conflict. They will conveniently disregard that Palestinians are not just Muslims but also Christians and Jews, that these three religions co-existed in Palestine peacefully prior to the illegal establishment of Israel. They will ignore the fact that Palestine opened its doors to Jewish refugees who had no place to go after the Holocaust.

The Zionists do not give a damn what your faith is. If you are in their way, then you are in their way, and they will rob you of your rights and freedoms accordingly. It is imperialism at its very finest, the scream of which first sounded a millennia into the past and is still echoing today.

To put the situation into more perspective, consider the history of the United States. Recount how the Europeans, upon their discovery of the Americas, instantly decided it was theirs – despite the fact that it was already populated. Recall how they fought the Native Americans and drove them out of their homes.

It is no wonder, then, that the United States, having perpetrated very similar crimes in its past, annually supports Israel with billions in tax dollars. If you are an American, then this should clue you in on how twisted this is. What makes Israel more deserving of the money that was pulled out of our own paychecks then we are? Especially considering the fact that we have our own problems, among which are high rates of poverty and homelessness, to deal with?

Even so, these acts of conquest are not evidence of power. They are proof of its lack. Imperialism is just the large-scaled version of a schoolyard bully, who picks on the other kids for a power fix, because they can’t stand their own weaknesses.

Palestine – and more specifically, Jerusalem – is not only a beautiful but a very blessed place. In tribute to the city, the iconic Lebanese singer Fairuz called it “The Flower of All Cities.” It is the one place on Earth that holds holy status in all three Abrahamic religions, harboring within its borders many significant places of worship.

Al-Aqsa Mosque in Jerusalem was the first qibla, the first direction, that Muslims stood towards in prayer before it was changed permanently to the Kaaba in Mecca. We Muslims believe that it is there that the Prophet Muhammad led all of the other prophets preceding him in prayer, while embarking on the night journey known as the Isra and Miraj.

It is in Jerusalem where many wars throughout history met their end, where violence and bloodshed and oppression came to a halt, where good triumphed over evil, where peace arose from the ashes of pain.

And history always did have a funny way of repeating itself.

But even then, we have a responsibility – not just as Muslims or Christians or Jews – but as fellow humans to take a stance against the occupation.

The Palestinian struggle against Israel – against genocide, ethnic cleansing, and forced evictions – has been ongoing since 1948, and it is now a mere 27 years off of a century since then. It is downright shameful that it has been allowed to go on for this long, and even more shameful are the people I see avoiding the topic entirely.

There is no complexity to the situation, no confusion, no blurred lines. There is a very clear divide between right and wrong here, and we cannot merely trust our authorities to stand on the right side while doing nothing ourselves. I have no expectations of the U.S. or any of the governments of Muslim countries whose lips have remained sealed on the matter.

What I do expect is that we, as people, should have a strong enough conscience to realize that staying silent in the face of oppression is akin to supporting the oppressor. If we do not take the initiative ourselves, then no one else will.

Picture a bloodstained hand clutching a rock. Picture the bloodstained hand bringing the rock to a gunfight, armed with nothing else but their honor and their unwavering faith, facing armed forces that know nothing of morals or humanity and that hide behind their weapons and bulletproof vests like cowards.

Picture mere children – who have had to grow up with the threat of these forces looming over their heads, who have lost family members and loved ones – harassing the occupation forces without a fear in the world, with the grit of someone who has a cause to die for.

Whose side, then, are you on?

Salma Amrou is a Senior Reporter and Senior Illustrator with Youth Journalism International.