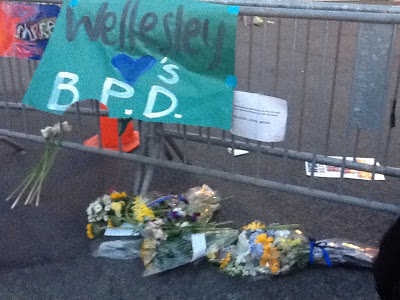 By Monica Blaze
Junior Reporter
Youth Journalism International
WIXOM, Michigan, U.S.A. – British rapper Tinie Tempah raps that “everyone’s the kid that no one cares about” in his song, “Written in the Stars.”
His lyrics show his determination and diligence to keep on keepin’ on, even through the worst of adversities.
Bullying is an enormous, recent issue and Tempah knows what it’s like to have been bullied.
Together, Tempah and the Defeat the Label Program in West Bloomfield, Mich., are empowered through the strength of music and friendship to put an end to bullying.
With such a popular song out, it was surprising to find that Tempah is a lot like any other young adult.
Only 22 years old, yet topping the charts of the music industry, he isn’t much older and definitely not much different than my friends, companions or me.

I quickly found myself playing a game of basketball with him and engaging in casual conversation.
He said that while he hasn’t been bullied recently, he was bullied when he was younger, as most of us were.
He was called things like “goof” because of his so called “silly teeth.” He claimed to have teeth going every which way. We all know we have flaws, but being ridiculed for them is never the answer.
The Friendship Circle of Michigan knows exactly what the answer is to end this sort of mockery.
They have created a campaign called Defeat the Label, which is a program designed to partner with youth and celebrities, like Tempah, to promote a “no label” message.
Labels like “nerd,” “goth,” “jock,” “prep,” “teacher’s pet,” “weirdo,” and a list that could continue on much longer, have been built up too high. This program works to stunt their growth and stop the usage of these words as labels on others. Allowing celebrities to join this program inspires teenagers to follow in footsteps created by great role models and generates a greater worldwide awareness for peace and love among everyone.
Tempah is a great role model for all teenagers. He encourages them to follow their dreams and abstain from bullying. To say that he is just a rapper would be to put a label on him and that is exactly what he hopes to avoid.
He wants to break away from the stereotypical ideas generally associated with rappers.
A little bit of “Tinie” shows his compassionate, soft side and a little bit of “Tempah” shows his strong, bold, rap side.
Raised in the modern society that the 21st century provides, he recommends that teens promote a positive message and get their names out into the world by using the internet.
Social media has discovering a lot of talent, he said, and he’s thankful for that.
You can learn more about the Defeat the Label campaign online at www.defeatthelabel.com.
Be a part of the movement just like Tinie Tempah.