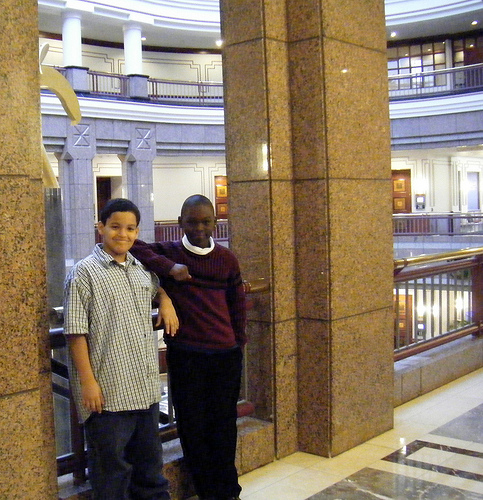 HARTFORD, Connecticut, U.S.A. – It’s hard to focus on learning when it’s 102 degrees in the classroom, said Juan Pachececo, an 11-year-old Hartford boy.
A scarcity of books doesn’t help either, said Dekevious Russaw, a 10-year-old student at West Middle School in Hartford.
Also see:
Recession clobbering kids, officials told
Trying to get by in tough times
Teens to Congress: Education is key
Congressman seeks help from teens
Pachececo and Russaw both testified at a legislative hearing Saturday about how the economic recession is affecting children.
Pachececo said his school did not have an air-conditioning system, so in the winter they had to wear jackets while in the summer they suffered through sweltering heat.
Russaw said that he thought his school was “not so bad” and that all he wanted was some more textbooks.
“My school is okay,” he said. “We got reading books. We need textbooks.” He said they had enough “reading books” but not enough textbooks.
Pachececo said that he believed the school was having a bad influence on his cousin, because the younger boy got interested when he saw fights.
Also, there were “cuss words” written all over the desks and in the small amount of books that they did have, he said.
Russaw said he was especially happy the day his teacher let him take home his science textbook.
He said he had a nice place to live, but life would be easier if his mom, who is a student, was working.
“My mom is trying to find a job,” he said. “She’s having a hard time.”
Russaw said he was definitely going to go to college and then after that, he wanted to go into the U.S. Coast Guard.
Pachececo saidhe would enlist in the armed forces as soon as he was eligible.
“My reading is not so great,” said Pachececo, who described himself as half ninja and half Army. “I’m not going to college.”