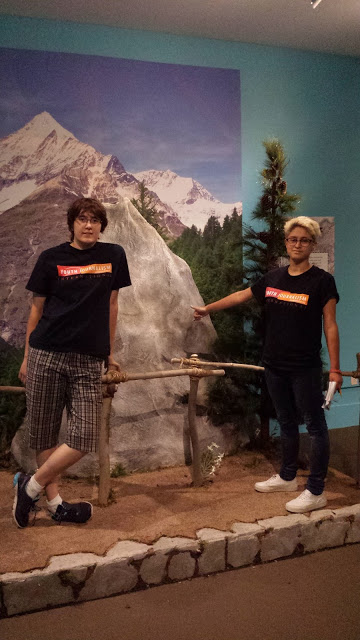 YJI reporters Mary Majerus Collins of Connecticut, U.S.A., and Laura Espinoza Jara of Quito, Ecuador each spent about a month in each other’s countries. While in Connecticut, they visited the Travel is Fatal to Prejudice exhibit at The Mark Twain House & Museum. While photography is not allowed inside the exhibit, visitors are allowed to pose on and take photos of special travel-themed sets like this one of an Alpine trail, all built by the Theaterworks company in Hartford.

HARTFORD, Connecticut, U.S.A. – For those interested in seeing Mark Twain’s top hat, steam trunk and other personal items, the Travel is Fatal to Prejudice exhibit at The Mark Twain House & Museum is the place to visit.

In addition to artifacts that belonged to Twain, the exhibit which will be open until January 26, 2016 – includes general artifacts used for travel in the time period. 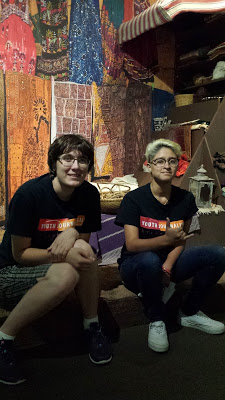 Centered around three of Twain’s books about travel, The Innocents Abroad, from 1869; A Tramp Abroad from 1880 and Following the Equator from 1897, the exhibit looks at prejudice, race and politics.

The exhibit gets its name from a quote from the conclusion of Innocents Abroad: “Travel is fatal to prejudice, bigotry, and narrow-mindedness, and many of our people need it sorely on these accounts. Broad, wholesome, charitable views of men and things cannot be acquired by vegetating in one little corner of the earth all one’s lifetime.”
In his life, Twain journeyed alone and with his family on trips that took him to many parts of the globe, including the Middle East, Europe, India,
Australia, South Africa and Bermuda.
Travel “certainly helped” change Twain’s mind about the world, said James Golden, director of education at The Mark Twain House & Museum.
A unique factor that sets this exhibit apart from past Twain house exhibits are three interactive sets, which visitors are allowed to use for photo backdrops.
Built by Hartford’s own Theaterworks to function like stage sets they include a boat, the French Alps and an Indian market and allow visitors to better picture the locations being described in both the exhibit and Twain’s works.
Mary Majerus-Collins is a Senior Reporter from Connecticut for Youth Journalism International.
***
Your tax-deductible contribution can help support this nonprofit at:
www.HelpYJI.org