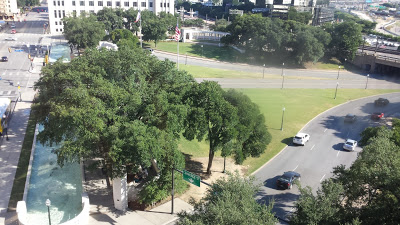 A view of Dealey Plaza from The Sixth Floor Museum in Dallas, Texas. (YJI)
DALLAS, Texas, U.S.A. – A key spot at Dealey Plaza – the public park that pays tribute to the late President John F. Kennedy – is The Sixth
Floor Museum.

The museum documents different points in Kennedy’s presidency and after his assassination.
It was from a “sniper’s nest” on the sixth floor of this building that assassin Lee Harvey Oswald shot Kennedy on November 22, 1963.
After you enter the building and buy your ticket, you are given an audio tour with a headset that lets you listen, as well as read, through the tour.

The tour begins where a window used to be.
“Imagine you’ve passed through a window into history,” begins the audio tour, narrated by Pierce Allman, a reporter who was stationed right outside the depository at the time of the president’s assassination.
The museum leads visitor through a path of pictures and text that put Kennedy’s life on display, from the charisma that attracted voters to his struggles with passing civil rights legislation. 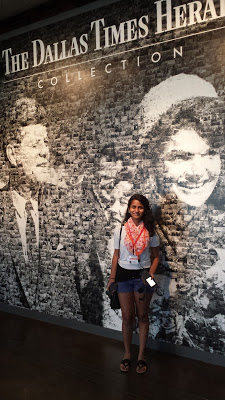 It pays tribute to its location by putting a lot of emphasis on Kennedy’s trip to Texas. Visitors get a look at trip itineraries, seating arrangements, video footage and more.

But nothing beats the glimpse, from six floors up, of the place the president was shot while riding in the back seat of a convertible.
The road, marked with a white “x” to show where Kennedy was hit, can be seen from the museum.
Tourists at Dealey Plaza take the quick, risky dash into the road to get a good picture of the iconic spot. In the museum, it’s possible to see it from the exact same spot where Oswald shot his gun.
In the museum collection is an exact replica of the gun that Oswald used. It’s visible near his escape route of 52 years ago. The Carcano Model 91/38 stands there through a plastic wall with boxes piled around it.
Though it was almost three generations ago when Oswald shot Kennedy, the museum brings the past to life in vivid detail.
You can learn so much just from visiting the historic landmark in Dallas. The Sixth Floor Museum is definitely a must-see for anyone interested in history, politics and news.
More information on Kennedy and The Sixth Floor Museum is on the museum website: www.jfk.org.

Mugdha Gurram and Sydney Hallett are both Senior Reporters for Youth Journalism International.

Read another YJI piece about Dealey Plaza and The Sixth Floor Museum from the 50th anniversary year.