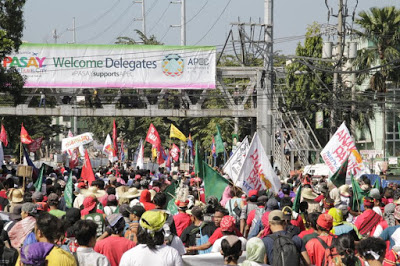 Thousands march from Rizal Park to Philippine International Convention Center, the venue of the APEC leaders' meeting. (Marc Lino Abila/YJI)
MANILA, Philippines – Despite the government ban on rallies during the recent Asia-Pacific Economic Cooperation (APEC) summit, thousands of people protested near where APEC leader were meeting.

Youth and student activists gathered last week and criticized the effects of APEC and United States-backed economic and education policies on the Filipino people.

“Don’t be fooled by flowery slogans of inclusive growth and building a better world. APEC’s development model has only resulted in worsening poverty and inequality for poor countries like the Philippines, said Vencer Crisostomo, national chair of the youth organization Anakbayan (Sons and Daughters of the Nation.) 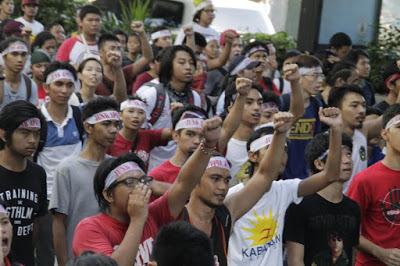 Youth activists raise their fists to show their resistance to the imposition APEC and US-backed economic policies in the Philippines. (Marc Lino Abila/YJI)

According to Crisostomo, APEC promotes low wages and the use of contract workers to make the country attractive to foreign investors.  At the same time, there are price hikes on basic commodities, electricity, water, and privatized education and health services. 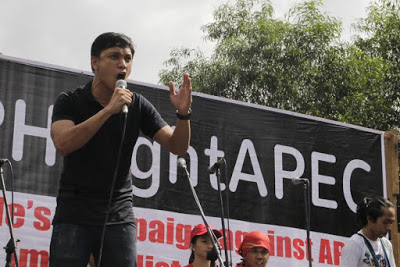 Vencer Crisostomo, leader of the youth group Anakbayan (Sons and Daughters of the Nation) blasts the police for barring the groups from expressing dissent against APEC near the venue of the summit. (Marc Lino Abilia/YJI)

“Under the dictates of foreign financial institutions such as the IMF-World Bank and corporations investing in education, increases in tuition and other school fees have been relentless,” said Charisse Bañez, who chairs the League. “The government has also reduced its spending in education to push public schools and universities to rely on corporate partnership.”
According to Bañez, the APEC’s aggressive push for privatization and deregulation in education has left many millions of children out of school across the globe.
Activists coming from the International League of Peoples’ Struggle also joined the rally to “Junk APEC.”
Canadian Malcolm Guy, who is the general secretary of the International League of Peoples’ Struggle, criticized Justin Trudeau, his county’s new prime minister for covering up environmental destruction by Canadian mining companies in the Philippines and elsewhere.

“We see 1.7 billion people living in extreme poverty. Social conflicts erupt and big power rivalry between the US, China and others intensify,” said Guy. 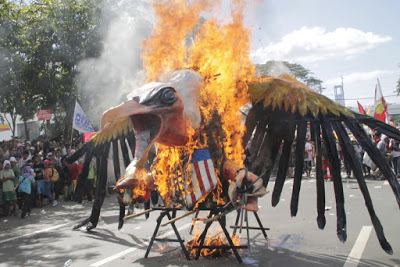 Protesters torch an effigy of a vulture to symbolize the predatory character of APEC towards poor economies like the Philippines. (Marc Lino Abila/YJI)

Renato Reyes Jr., secretary-general of Bagong Alyansang Makabayan or New Patriotic Alliance, a national democratic alliance of progressive organizations in the Philippines, also spoke at the rally.
“Over the past two decades, APEC and imperialist globalization have only benefited the rich countries while further impoverishing developing countries like the Philippines,” said Reyes. “Neoliberal economic dictates have caused severe unemployment, migration, depressed wages, landlessness and land-grabbing as well as the degradation of the environment,”
said Reyes.
In a statement, Reyes’ group also slammed the Philippine government’s security preparations, which they said included blockades against protesters, the cancellation of more than 1,300 flights, detention of street dwellers and the closure of several main roads.
The groups also denounced the Philippine government’s deployment of anti-riot police forces which tried to disperse and doused the protesters with water cannons in Manila.
But the groups stayed and held a program to express their opposition to APEC and its policies. They ended the rally by burning an effigy of a vulture dressed in the colors of the United States flag, symbolizing the predatory character of APEC and its support from the U.S. government.

Marc Lino Abila is a Reporter for Youth Journalism International. 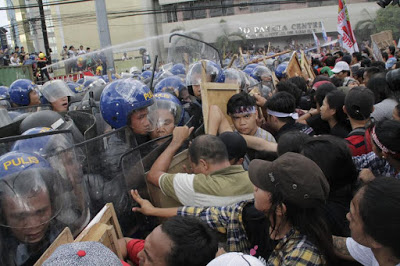