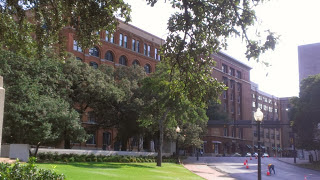 The view of the Texas School Book Depository from near the spot where President Kennedy was shot. (Kiernan Majerus-Collins/YJI)

DALLAS,  Texas, U.S.A. – Looking out the sixth floor window of the Texas School Book Depository, you can see a river of pale concrete running from downtown Dallas through Dealey Plaza and out into the world beyond.

From this height, the road seems to be flanked by plains of green grass that stretch for miles before ending abruptly at the foot of a stark white Works Project Administration project that stands no more than 20 yards from the empty pavement. 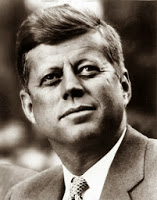 Beyond the green and white of the Plaza and the pale gray of Elm Street hangs an endless Texas sky, blue and cloudless on this day.

It is a pleasant scene, though unremarkable. Bright colors gleam in the morning sun. Yet below the surface there remains a red stain that 50 years have failed to fade.
The bloody moments of Nov. 22, 1963 cast a specter over this place. This is where
President John F. Kennedy died.

Today the Book Depository is home to the Sixth Floor Museum, which tells the story of Kennedy’s life and death.

The museum takes a wide-lens approach at the outset, exposing visitors to the cultural trends of the early ‘60s, and gradually narrows its scope as they walk toward the window where Lee Harvey Oswald fired the fateful shots. 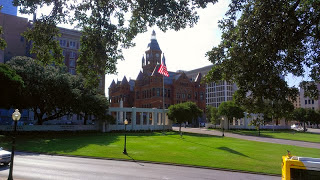 A view of Dealey Plaza from the Grassy Knoll, which borders Dealey Plaza. (Kiernan Majerus-Collins/YJI)

A minute-by-minute account details the responses of the Secret Service, the Kennedy family, the news media, and Vice President Lyndon Johnson, among others, as they lived through and dealt with the assassination. 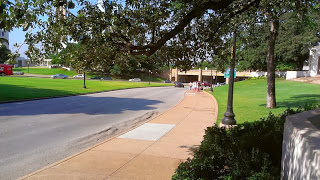 The stretch of road within Dealey Plaza where Kennedy’s motorcade came under fire. (Kiernan Majerus-Collins?YJI)

The short tour ends with an examination of the various conspiracy theories that
continue to surround the shooting, and a display about the aftermath, measured both in days and decades.

An additional site in Dallas – a block away from Dealey Plaza and the Sixth Floor Museum – also serves as a reminder of that awful day.

In an open square near the old Dallas courthouse stands a large concrete box, 30 feet high and 50 feet wide on each side, with an open top embracing the sky.

Inside is a small black platform, empty, with the slain president’s name engraved on it.

The centerpiece of the memorial to President Kennedy in Dallas. (Kiernan Majerus-Collins/YJI)

Though architect Philip Johnson’s memorial is not a beautiful space, it captures the mood of things well. That day in Dallas was bracing and tragic, not just for the city, but for all Americans. 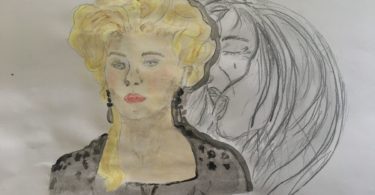