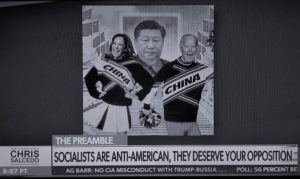 Screenshot from the Chris Salcedo show on Newsmax during a segment claiming the Democratic Party is both socialist and controlled by China.

Piqua, OHIO – Donald Trump is ending his presidency as he began it: collapsing under the weight of his own narcissism while the world looks on and laughs.

Trump is alone. Even his enablers no longer give credence to his desperate fantasies.

The Supreme Court has firmly rejected his latest round of lawsuits, affirming the election results of multiple states were genuine.

The Trump campaign legal team, headed by sentient mound of earwax Rudy Giuliani, is a cabal of Trump World’s most grotesquely shameless denizens, the pathetic droogs already so tarnished they no longer feel the need to rinse off their legacies.

As Trump’s tweets get less coverage, and news of Biden’s prospective cabinet has begun to dominate the headlines, it feels the country is beginning the process of moving on.

While the urge to let your memories of the Trump years fade away is an understandable one, it’s also deeply unwise.

Because as absurd and pitiful the Trump administration’s attempts to overturn the election may be, their lies have irrevocably altered American life for the worse. Trump and his cronies have unleashed a wild beast which will not be caged.

According to a CBS Poll, 82% of Trump voters don’t believe his victory was legitimate. These people aren’t going away. They’re just going back underground. Donald Trump spreads misinformation from the White House, but when he goes away, a slew of propaganda outlets will continue fanning the flames of paranoia and fear. The alternate reality Trump has crafted will only be expanded upon, as the enemies list grows to anyone who doesn’t believe the big lie.

Right-wing pundits like Tucker Carlson and Ben Shapiro are now seen as traitors for acknowledging reality, their audiences shrinking as they find even more outlandish figures.

In turn, the traditional epicenters of conservative thought will learn further right, in hopes of retaining their viewers. An already furious base will be further angered by conspiracies of how the election was “stolen,” thus making their worst instincts justified.

In the meantime, the Republican Party will be swallowed whole by its extremist wing.

Party leaders, who have seen their relationship with Trump as a marriage of convenience, are no longer trusted. A steady stream of radicals who share Trump’s talent for courting the alt right and populist language will rise to prominence.

Meanwhile, the Democratic Party loses its grip on power, as a red wave overtaking both houses of Congress in 2022 becomes increasingly likely.

Trumpism was largely a result of the establishment’s inability to imagine Trump. They simply could not conceive that such a blatant authoritarian could gain popularity in the United States.

Well, it is clear that he did, and so did the ideology he represented.

Millions of Americans are alienated, angry and yearning for revenge.

Unless we take on the realities of what caused the Trump phenomenon, another demagogue will take his place, promising to wreak the vengeance the base craves, with catastrophic results.