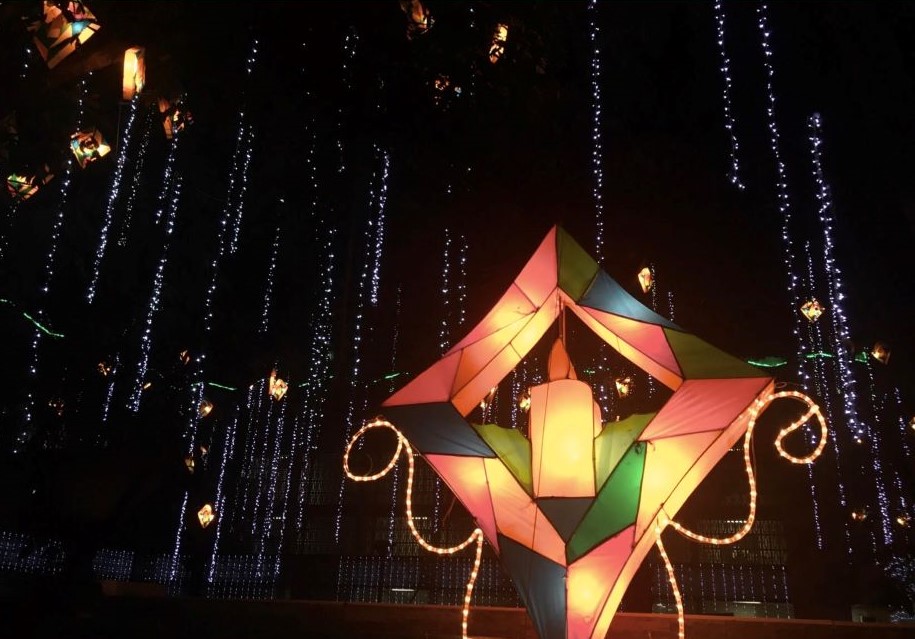 A parol, or traditional Filipino lantern, aglow against a December evening near Parañaque City Hall, while the trees in the background are strung with delicate hanging lights. (Justine Gianna Topacio/YJI)

Parañaque City, PHILIPPINES – In A Christmas Carol, Charles Dickens famously wrote, “I shall try to honour Christmas in my heart, and try to keep it all the year.”

With the Philippines taking the title for the longest length of the Christmas season, it’s a sentiment I believe very well defines how my country goes about the holiday.

Filipinos begin festive preparations at the beginning of what we call the ‘ber’ months, and September 1st marks the start of the early enthusiasm that will carry on steadily through the rest of the year.

Neighborhoods begin to show the first hints of holiday merriment, large countdown calendars are unearthed, and overly-used Christmas tunes are guaranteed to be drifting down the aisles of every grocery store. There’s a sharp and equally amusing dichotomy in seeing gleaming ornaments and tinsel being sold alongside Halloween trinkets, but it’s just another custom in a patchwork of holiday traditions.

Perhaps the most frequently sold piece of decor around this time of year is the parol. Originally crafted out of bamboo and Japanese paper, these star-shaped lanterns were created to guide townsfolk to church under the glow of the moon.

Today, a variety of resplendent handcrafted designs are sold in the market, ranging from iridescent pieces made of pearly capiz shells to flower-shaped lanterns blooming with vibrant tints. These works of art adorn everything from homes to street posts.

Against the inky stretch of the night sky, their soft radiance is a symbol of shared hope.

One is bound to also see a plethora of them during the nine-day devotional practice of Simbang Gabi, which means “night Mass.”

Beginning on the 16th of December, these pre-dawn Masses are held in anticipation of Christmas Eve and, as the name suggests, involve the community going to church late at night or in the early hours of the morning.

Drenched in moonlight, a church becomes quite the magical sight. Scintillating lights are strewn across the facade, and the boughs of the surrounding trees hang heavy with glowing parols.

The service held on the last day of Simbang Gabi is called Misa de Gallo, and there’s a long-running belief that the person who completes all nine days will be granted a wish.

After each Mass it’s rather common for churchgoers to indulge in holiday delicacies that are sold in nearby stalls. Two traditional treats are bibingka, which are egg and rice-based cakes cooked in clay pots and puto bumbóng, which is violet sticky rice with muscovado sugar and pale shreds of coconut. Vendors also sell hot drinks such as ginger tea and Spanish-style hot chocolate.

Finally, with the enchanting culmination of this novena comes the long-awaited Christmas Eve, or Noche Buena, which means “night of goodness.”

Preparing for the feast is usually a lovely family affair. Once the dusky skies dwindle into the solemnities of midnight, the members of each household gather round the table for a few sacred moments in prayer to welcome Christmas Day.

The hour onwards brings about a celebration alight with exchanged gifts and decadent revelry.

And for many countries, this is where the seasonal chapter comes to a close. But here decorations can still be admired until Epiphany, or the Feast of the Three Kings, on the 6th of January. It adds up to a grand total of more than four months.

It’s essential to note that due to the countless tragedies that have climbed out of the pages of 2020, various alterations are being made to this year’s festivities. People are strongly encouraged to attend Mass virtually and limit celebratory gatherings as much as possible.

Despite this, communities are still striving to find ways to preserve the essence of Christmas, which has always been about putting faith and family on a pedestal.

It seems that Filipinos are without a lot of things so commonly seen in well-known holiday movies – no thick blanket of snow to wake up to on Christmas morning here, no crackling fireplace, candy canes or mistletoe.

But I think the reason Christmas has such a warm place in my heart is because Filipinos tend to cling so heavily onto the essence of the season: a little bit of rustic magic threaded into togetherness and tradition.

It’s simplistic and brimming with warmth. And it may be a bit different this year. But there’s a certain quality that comes to mind when I think of the deeply-rooted traditions of this country.

Quite like a softly whispered hymn or a faded lantern aglow against the night, it may not be incredibly grand, but it’s calmly beautiful. And I’m more than sure that this special essence will carry us through December.

Justine Gianna Topacio is a Reporter with Youth Journalism International from the Philippines.