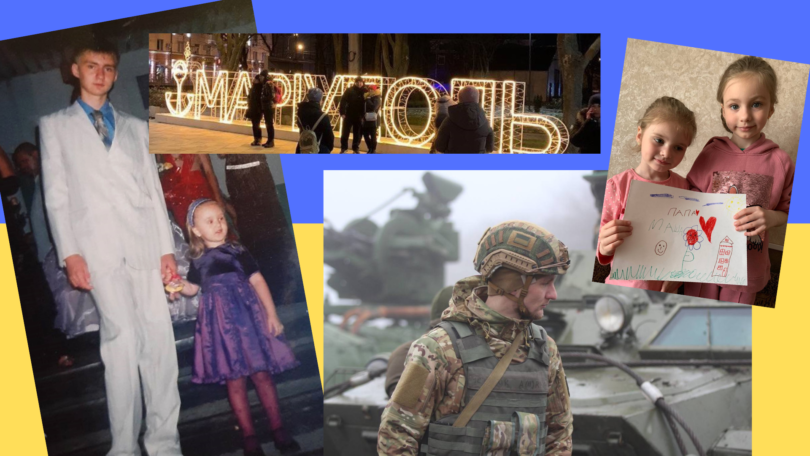 MADRID – My brother Evgeniy Tkachenko is now in Mariupol, the hottest spot in Ukraine. He and his colleagues from the Azov regiment have been defending the city from the first day of Russia’s invasion of our territory.

Despite the ambiguous opinion about the regiment itself, no one can deny that its soldiers are now sacrificing their lives to save civilians and our country.

My brother and I were not very close due to our age difference. He is my only sibling, and he is 14 years older than me.

But he was a real hero all my life. He worked for the police in Crimea until 2014, when Russia occupied Crimea, a region of Ukraine.

Zhenia (his nickname) returned home and joined the Armed Forces of Ukraine and took part in military operations in the Donbas region of Ukraine, where pro-Russian separatists had seized control.

I will never forget my mother’s tears and his wife’s emotions when we were informed that he was participating in what our government called an antiterrorist operation.

About a year ago, he had the opportunity to work in Mariupol, where his family soon moved. He lived there with his wife Daria and their two small daughters, now 4 and 6 years old.

They had many plans for the future – my brother began to study seriously to get a law degree, the girls dreamed of how they would go to school near their house, and in the summer, we would come to visit them with the whole family and go to the sea.

They just managed to settle in Mariupol, and in the middle of February, I went to visit them. It was my first time in this city, and I was impressed with its beauty.

Another purpose of my visit was to get my first-ever tattoo in memory of my grandmother, and of course, my older brother supported me, a secret from my mother.

On February 24, by a fortunate coincidence, my brother’s wife and their daughters arrived in Lozova to visit relatives. This was precisely the morning when I woke up at 6 a.m. from the sound of bombs. It is truly a miracle that they could get out. Otherwise, no one knows where they would be now.

But my brother, like thousands of soldiers, stood guard over Mariupol. From the first days, they protected the city, and it is they who suffered the most. There is no water, food, or electricity in the town, and it was impossible to take out the wounded civilians. There was no way to provide medical assistance for them, let alone for the military.

It is insanely difficult to watch all this on the TV screen, but knowing that your relatives are there is even more difficult. Thousands of wounded soldiers and civilians, with not a single surviving building.

Children, the elderly, and our defenders are dying.

The Ukrainian parliament said that “all remaining women, children and the elderly” were evacuated Saturday from the Azovstal steel factory, where many had been sheltering, but that the military remained in place.

The shelling does not stop for a moment. Evacuations are constantly disrupted, and the bodies of dead people lie right on the streets — all of this in the 21st century in a city with a population of 446,000.

Mariupol is the pain of the whole country. And the pain is very personal for my family and me.

Since there is no connection with my brother, it remains only to pray and hope he is alive.

Occasionally, when someone gets a connection, he texts, “I’m fine.”

But there are still hundreds of wounded soldiers who, in addition to not having access to food and water, continued to protect the lives of civilians.

Many nations are asking Russian President Vladimir Putin to end the blockade of Mariupol. More than 20,000 residents have already died, and the military is calling for help and waiting for it. They have no contact with the outside world and do not understand why no one comes to help.

Families of the soldiers who are trapped there, along with other Ukrainians, are powerless to support them. Spreading information on social media isn’t enough.

Ukraine is asking leaders of other countries to push for a “deblockade” to ease the situation.

My family has never been too patriotic. Since we are from eastern Ukraine, we have been used to speaking Russian all our lives and have never been too radical in political matters. But when the issue of protecting our country arose and my brother found himself trapped in Mariupol, my dad – a veteran of the war in Afghanistan who received a disability there – said, “If my son is protecting the country, why will I stay at home?”

That’s when my dad entered the territorial defense of Lozova, my native city.

My brother once posted on social media, “To choose a military profession means to give up almost everything that you are used to. It means to forget about a quiet life. It is sometimes not to see your relatives for months. But despite the minuses – I love my work. I made my choice many years ago and have no regrets.”

I’m proud of my family. I’m proud that when others were thinking about how to escape and avoid military service, my brother and father stood up.

I am proud and madly worried, waking up every day thinking of what is happening now in Mariupol.

Every time I talk to my mother, she cries and asks me to tell the whole world about what is happening with us, and every time I see stories from my friends about the siege of the Azovstal steel plant, where people are trapped and which is under vicious attack by Russian troops, my heart breaks.

Our soldiers give their lives for Mariupol. They refused to surrender when they had the opportunity. They said they would stand until the end.

I, as a citizen of Ukraine and as the sister of one of the fighters, feel it is my duty to help them, to call on the world to help them. I hope people will sign a petition asking the United Nations to act to save Mariupol.

My brother and other brave soldiers are hoping for an end to the blockade, and their children, wives, and mothers are waiting for them at home.

Tanya Takachenko is a Junior Reporter with Youth Journalism International.