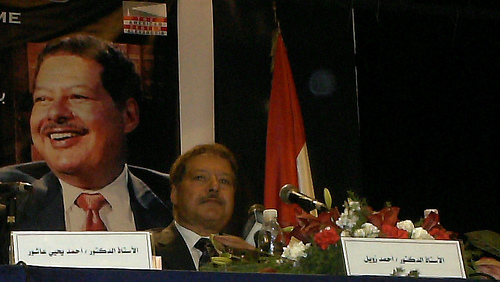 ALEXANDRIA, Egypt – Proud and raggedy, the yellow and black taxi I’m riding in speeds by the very place an Egyptian-born Nobel Prize winner Ahmed Zewail spent his early years aspiring to go farther than any humble Alexandria University student ever had before.
Captured by the mere excitement of seeing Zewail in flesh and bones, I knew the taxi driver sensed my enthusiasm as I repeatedly looked out the window, then hurriedly scratched these comments.
When I told my friends I was going to see him, they laughed and said, “You can barely pass chemistry class.”
The truth is, I am not captivated by Zewail’s chemical genius, but by his pure intellect and simple yet dense theories on the world, by his success in breaking through in a place where only people with powerful connections and money can succeed and most of all, by his belief that all of us have the potential to make something of ourselves.
Aristotle once said, “The roots of education are bitter but the fruit is sweet.” Zewail is an epitome of the power of having ambitions and working towards them, no matter how long the odds.
What many people tend to dismiss is the more direct and crucial impact of a fractured democracy on young dreamers – the lack of real opportunity.
A corrupted government, one that uses not only absolutism and nepotism, but also can find ways to justify its actions with immunity, is doomed to have dreamless youth and rare social class movement.
Zewail beat those odds, stayed humble through the process and continues to hunger for knowledge and advancement.
In some way, anyone with a dream bigger than he is sees himself in Zewail. Ticket in hand, I stood at the footsteps of Alexandria Creativity Center with its pale white pillars and grand chandeliers, to see the man that made it. 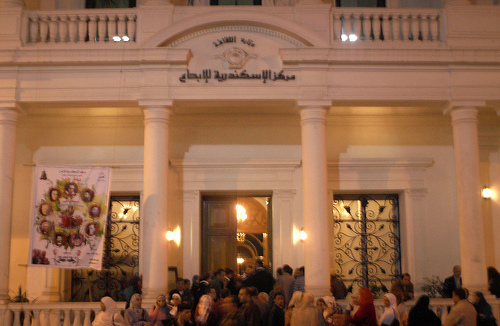 Egyptian, innovative, respectful, thick Arab hair – he made it.
After an introduction of unprecedented praise, Zewail took the stage and went straight to identifying the purpose of his attendance: to discuss the defects of education in Egypt and how to solve them.
At first, the audience was told to write questions on little paper slips passed out earlier, but Zewail requested that people ask him personally in order to engage in a fruitful dialogue. The audience of about 300 consisted of students and teachers from both private and public schools, each with a frustrating experience from within the education system.
Some questions quickly turned into comments, which turned into fiery complaints about the questioner’s attempts to strive, attempts which can only be compared to blowing into a punctured balloon.
The tension grew, starting with the first comment from a man working with the government’s education system. The man claimed that even teachers aren’t educated properly and the curriculums aren’t molded to stimulate young minds. All the program of study does, he said, is put a sense of hatred of knowledge in these youth and turn information into a futile burden.
Zewail responded to this with one sentence, “Why don’t you change that?” The audience went wild with clapping and some made loud comments. Slowly, the silence returned.
Zewail continued.
“The age of memorization is over,” he said.
The man in the audience, who responded by saying that it wasn’t his job, played catch with responsibility – a typical attitude embraced by the controlling figures in the education system.
Other comments came from young men majoring in engineering in Alexandria. One of them told a frustrating story of how he and his colleagues tried to make a team to build a simple satellite.
The man gripped his microphone tightly as he spoke of how no one would provide him with the money or resources to study the making of a satellite. Even the sole satellite Egypt has cannot be compared to complex satellites made by other countries.
This is a typical occurrence here in Egypt. The lack of resources or financing
for any attempt to achieve anything beyond school work and tests was like walking into a brick wall.
I could see the look of horror in Zewail’s teary eyes when he said, “There is no such thing as Egyptian knowledge and Indian knowledge; knowledge is knowledge.”
Even my frustration started to grow. It was now becoming clear that even a man with the answers and experience can’t help.
If the government worker, the student and the teacher can’t do anything about fixing the incredibly flawed learning process, who can?
Another student spoke of how unhelpful his Ph.D.-holding professors are in his quest for a real education. He ended his statement saying, “Ph.D. – Pull Him Down.”
Zewail then tried to address professors and teachers, urging them to do anything they can to inspire students because they play a big role in a student’s life.
He spoke of the importance of encouraging words by referring to the late U.S. President John F. Kennedy.
“JFK said, ‘We are going to the moon,’” said Zewail. “Just saying that created a scientific movement in America.”
Clearly the audience came to tell Zewail something – that the surroundings and mindset of the higher, responsible figures in the education department are missing something and are in dire need of an enormous change.
Many came with the hope that Zewail has the answer, that he might carry them in a movement to achieve their full potential.
Zewail, having failed at this hope, left a different impression.
If we wish to be inspired, if we wish to be motivated, if we wish to succeed, we must make a way for ourselves.
My impression was that if those 300 people, including myself, were able to team together we would make a difference, at least for each other.
My respect for Ahmed Zewail remains and will continue to stand strong, but I also gained a strong admiration for some of those audience members.
To stand tall when all else tries to bring you down, that is a pure form of strength, and even if they, and I, do not succeed, we will know that all measures have been taken and every attempt has been made.
But for now, Egypt will continue to use past accomplishments for its pride and glory – the Pyramids and Ahmed Zewail.

Jessica Elsayed is a Junior Reporter in Egypt for Youth Journalism International.