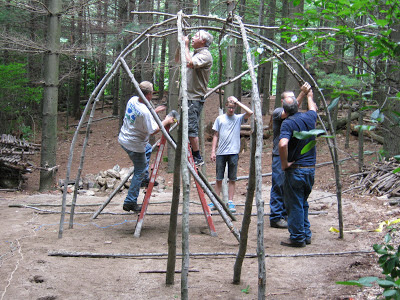 Indian Rock staff and volunteers work on the frame for a new wigwam. (Emilio Mercado/YJI)
BRISTOL, Conn., U.S.A. – A new wigwam is rising at the Indian Rock Nature Preserve.

The wooden hut, made mostly from  tulip tree bark and  red maple saplings, aims to match the style of buildings that the Native Americans who lived in the area erected in days past. 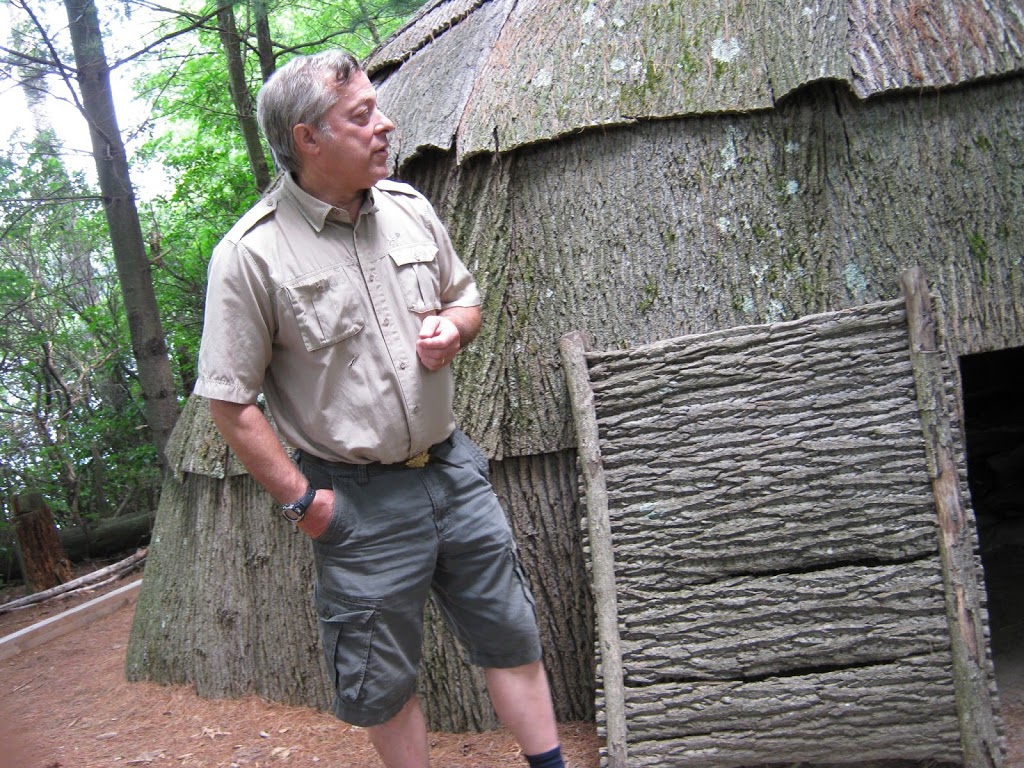 “It’s coming out pretty good,” said Mike Chagnon, a Bristol Central High School sophomore who is volunteering this week to help on the project.
As rain began to fall Tuesday, Chagnon and older men were tying the long branches together at the top to form a hooped framework for the structure.
Next they’ll gather tree bark to cover the outside of the wigwam.
“It’s like shingling a roof,” said Jon Guglietta , the preserve’s director.

They’ll likely finish the project this week. The new wigwam will sit on a flat parcel in the woods about 20 feet from a pond, not far from a similar structure put up less than four years ago that already looks ancient.

The builders aren’t following Native American ways entirely. They’re using hay twine to strap the pieces together and they’re going to use screws to attach the bark so the project won’t take too long.
Construction of  the wigwam is being done in early July because people can peel the bark off the trees more easily while new cells are forming at the base of the bark this time of year, Guglietta said. Later in the summer, it would be too hard to strip away, he said.
The nature preserve, part of  the Environmental Learning Centers of Connecticut, will use the finished wigwam to show how the Tunxis Indians lived when they inhabited the area centuries ago.
Reporters Yelena Samofalova and Mary Majerus-Collins assisted Emilio Mercado, Ryan Carzello, Kathy Santana and Jennyletz Arroyo with this story. The four are part of a week-long camp at Indian Rock on environmental journalism done in cooperation with Indian Rock, the Bristol Rotary Club and Bristol Boys & Girls Club.