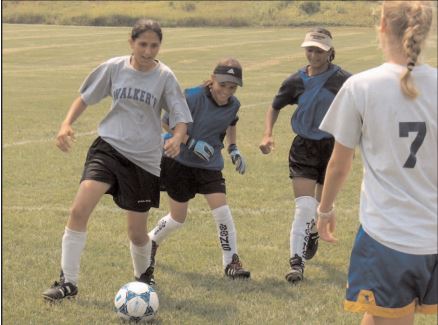 Practicing their soccer skills at the Ethel Walker School in Simsbury recently are left to right: Shamila Abdul Wakil, 16, Khatera MohammadZahir, 13, Roia Noor Ahmad, 14, all of Afghanistan. Joining in the fun on the right is Pamela Newell, whose father coached the Afghan team. (Katie Jordan/YJI)

SIMSBURY, Connecticut, USA — To most teens, summer camp is nothing out of the ordinary.

But last week eight girls from Afghanistan wound up the summer camp experience of a lifetime.

The girls, who are as young as 11 and as old as 16, came all the way from Kabul to attend a sports and leadership camp in Connecticut, sponsored by the Afghan Youth Sports Exchange, a non-profit organization.

Living at the Ethel Walker School in Simsbury , the girls learned valuable skills to use both on and off the soccer field.

For girls who had rarely played soccer before coming to America – because it is a male-dominated sport back home — they certainly seemed to be making up for lost time.

They were chosen for the team based on interviews they gave at the Afghan Center in Kabul , said Awista Ayub, the program’s founder.

Roya Zaka, a 13-year-old Afghan-American from Virginia , practiced with the girls and acted as a translator. She said the girls adhered to a busy training schedule, playing soccer six hours a day.

And they loved it.

Jasmin Wasil, 13, who played midfield, said she likes to play soccer and hopes to continue playing when she returns to Afghanistan .  She also said she wants to teach others to play.

Shamilla Kohestani, the team’s 16-year-old forward, also enjoys playing soccer. She said she was excited about competing in the International Children’s Games in Cleveland , Ohio in late July and early August.

This year is the first time that a team from Afghanistan has played in the International Children’s Games, which began in Yugoslavia in 1968.

To prepare for this competition, the girls got help from the Simsbury Soccer Club, which organized the coaching in town.

“There’s a lot of folks involved,” said Alan Blanchard, one of the many guest coaches who helped the girls learn to play soccer.

Everyone involved is helping these girls do a lot more than just learn how to play soccer.

The Afghan Youth Sports Exchange’s goal is to help the girls learn not just the game of soccer, but also some leadership skills they can take home with them. Ayub said she hopes they can better Afghanistan ’s schools by starting sports programs.

Ayub said the girls will be able to use sports as a “springboard to become more involved in community.”

Ayub was born in Afghanistan , but has lived in the United States since she was two.

After the Sept. 11, 2001 terrorist attacks, she said, she wanted to do something to give back to the Afghan community.

“I knew I wanted to help out, but I didn’t want to just jump on the bandwagon,” said Ayub.

She said she turned to the idea of using sports as a unique way to help because athletics is close to her heart. “This program is an extension of myself,” Ayub said.

Oddly enough, soccer was the one sport that Ayub never played. 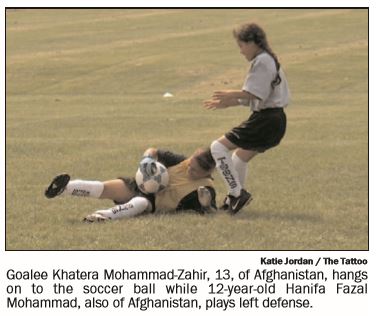 But soccer proved the most practical sport to work with because it only requires a field and a ball. In Afghanistan , more specialized equipment is hard to obtain.

Sports is also a perfect way for people from two different worlds to come together, Ayub said.

“Athletics can transcend many boundaries,” she said.

Despite all the planning, Ayub described her first meeting with the girls as “overwhelming.”

“It was an idea on paper so long,” she said.  “I had to pinch myself to make sure it was true.”

But soon reality kicked in, and the recognition that she had to take care of the girls helped her over her shock, said Ayub.

“They made me feel welcome from day one,” she said.

Since that first meeting in early summer, both Ayub and her team have had an experience they will never forget.

In addition to making friends and playing soccer, the girls have spent some of their time seeing sights and learning about a country that is very different from their own.

Eleven-year-old Hanifa Muhammad Faizel said that there’s nothing about America that she doesn’t like, but that the best part was Busch Gardens , a large amusement park in Virginia .

Wasil, who learned English in a school in Afghanistan , said living in America for the summer has improved her English, although it’s still hard communicating with people.

Riding bikes, playing basketball, eating ice cream, and using a computer are all opportunities Wasil and her teammates got to enjoy during their visit.

“I like the people of America .  They are so good,” Shamilla Kohestani said.

She said they had visited Maryland , Washington , D.C. , and New York , as well as the Lake Compounce Theme Park in Bristol — and, of course, Busch Gardens .

The girls were also impressed with all the grass in America .

“ Afghanistan is mountain country,” Kohestani said.  “A little trees, a lot of shrubs.”

Zaka recalled a visit to the beach, when the Afghan girls asked her if wearing skimpy bikinis was against the law. She told them, “It’s America , honey!”

The Afghan girls have not been the only ones who have had their eyes opened by this experience.

Zaka said, “When they come here, I can see a little bit of Afghanistan , which I’ve never gotten to see before.”

The girls told Zaka about the beauty of their own country, about their pride in being first or second place in their class, and about their wish for better schools, she said.

She also said that many Americans think Afghan girls are quiet and innocent.

“They’re not innocent,” Zaka said. “They’re just like us.”

It will be hard to say goodbye to her eight new friends, said Zaka, but she will keep in touch through email.

“Someday I’ll go there,” she added.

Ayub said of her team, “They’re different girls today than the day I met them.”

She said she admires how much they’ve grown and their maturity in handling things they’ve never had to deal with before.

For herself, Ayub said, the experience has been equally rewarding.

“It’s been like a parent watching their own kids,” said Ayub.

The girls played in the International Children’s Games the last weekend of July and even came to the attention of President George W. Bush, who gave a speech welcoming the young athletes.

Fazal Mohammad, who played defense, said the president told the girls that they were a very good team.

Fazel Mohammad said that when she tells people back home of her visit to this country, she will say that she saw the president and liked it a lot, played soccer and liked it a lot and saw a lot of people and Afghans who lived in America.

The girls also enjoyed meeting people from countries around the world – including Mexico, Iceland, Pakistan, India, Australia and Greece – at the International Children’s Games, she said.

As for competing in the games in Cleveland, Fazal Mohammad said it made her feel “very happy and proud” for her country.

The future of the program for Afghanistan ’s girls seems bright.

When the girls get home, the girls will have guidance to accomplish their goal of starting sports programs in their schools, Ayub said, because the Afghan Center will be there to help them.

“Follow up is very important,” said Ayub. “I’m very confident they’re going to utilize these skills in a positive manner,” she said.

The girls all have email accounts and will all be able to keep in touch with the new friends they’ve made, said Ayub.

And as for the Afghan Youth Sports Exchange itself, Ayub said this is just its first year, and she plans to continue its work in the future.

The non-profit organization will need more donations to keep running, however.

More information can be found online at the Afghan Youth Sports Exchange Internet site at: www.Afghansports.org.

Katie Jordan is a Reporter for Youth Journalism International. Also see her accompanying piece: A Whole New Outlook On Sports And America.