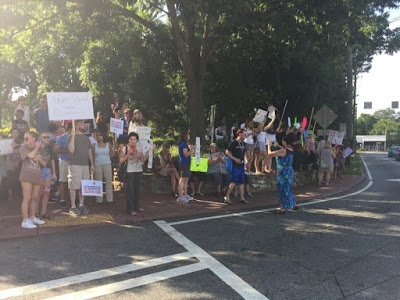 Georgians gathered in the town of Roswell in solidarity with the victims of violence in Charlottesville. (Madeleine Deisen/YJI)
ROSWELL, Georgia, U.S.A. – As I watched events unfold in Charlottesville Friday and Saturday, my main emotion was shock. I could not process the presence of white supremacists marching proudly and threateningly down the streets of Virginia with Confederate and swastika symbols in hand.

But upon further consideration, I realized that while my fear, anger, and disgust were called for, my shock was not.
How could I be shocked that such a large group of white supremacists exists when the White House is infiltrated with white supremacist ideas?

Trump works with Steve Bannon, founder of Breitbart News, an “alt-right” media outlet which has published overtly racist and anti-Semitic material. His other advisors include Sebastian Gorka and Stephen Miller, both known for their white nationalist and xenophobic ideologies. 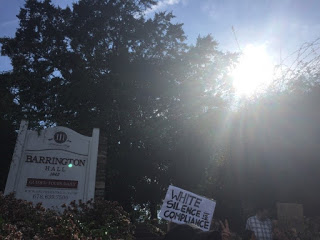 A protestor stands outside Barrington Hall in Roswell, Georgia, the home of the town’s founders, who were slave owners. The sign says,”White silence is compliance.” (Madeleine Deisen/YJI)

Since Trump took office, many events have been worthy of outrage. But I hope the
heartbreaking, surreal violence in Charlottesville will be a wakeup call for all Americans. I hope everyone – from participants in the Women’s March to Trump voters – will love one another in the face of hatred and put in the work for justice and equality.
And I do believe there is hope.
Against the backdrop of bigotry shown in Charlottesville, I attended a rally in the
town square of Roswell, Georgia to show solidarity with the peaceful counter-protestors and victims of violence in Charlottesville.
Like Charlottesville and most Southern towns, Roswell has its own history of slavery and oppression. Near the town square is Barrington Hall, where the founders of Roswell lived along with their slaves.
But instead of Confederate flags like those of the marchers in Charlottesville, we carried rainbow flags to show solidarity with Americans of all identities.

YJI reporter Madeleine Deisen and her mother, Shannon Deisen, holding a sign that says, “History has its eyes on you.” (YJI)

Our group was multicultural, and included everyone from whites with Southern accents to Asian-American immigrants. People carried signs that emphasized love, peace, and speaking up against all forms of hatred and oppression.

Charlottesville is further proof that we as Americans can’t continue to sweep our current and past racism under the rug. But even though we must acknowledge the existence of
and work to dismantle racism, the domestic terrorists in Charlottesville do not represent the America I know.

The America I believe in is the loving group of people in Roswell who stood up for their fellow citizens and for love – and all the people who will continue to do so.

Madeleine Deisen is a Reporter with Youth Journalism International.

***
See more viewpoints on Charlottesville from Youth Journalism International students around the U.S. From Connecticut, Max Turgeon writes that what happened there will make America stronger. From Iowa, Garret Reich urges America to take a good look at itself and respond peacefully. From California, where Shannon Yang is concerned about the impact of what happened in Charlottesville on the First Amendment.
***
You can help give a voice to young writers worldwide with a tax-deductible donation to Youth Journalism International. Thank you for being generous!
HelpYJI.org