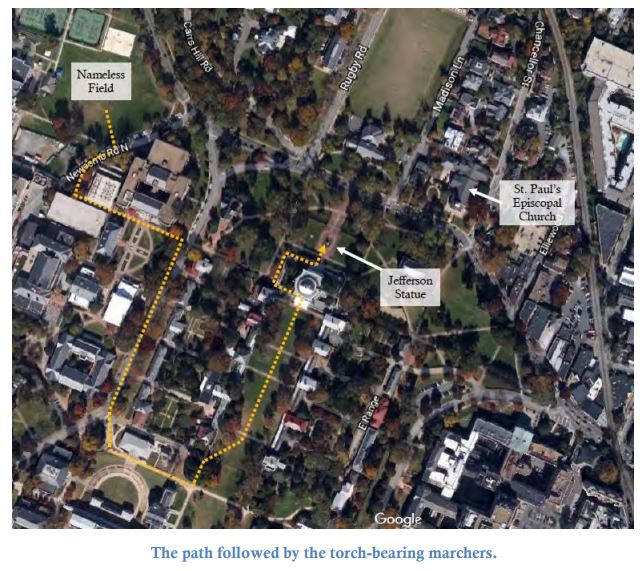 From Final Report by Hunton & Williams
GLENWOOD, Iowa, U.S.A. – My heart sank as I sat down to write this, as it has whenever there has been a terrorist attack committed by American citizens based off of hate,
anger, and animosity towards fellow American citizens.
Growing up as a white girl in Iowa, I’ve been inspired and excited when I find myself among people of diverse races and religions. These have been experiences I’ve gained mostly outside of the Midwest, experiences that simply don’t extend much into my part of the heartland.

I believe that is why, on Saturday, there was not the excitement or horror here in Glenwood that filled the hearts of millions across the nation over the Charlottesville
violence.

Instead, the crisis appeared to be shrugged off, as are most uncomfortable agitations here.
At work on Saturday night, I asked customers what they thought of the turmoil in Virginia. Several looked at me with a blank stare, unaware of what had occurred.
Others confessed that it was a pity, that America should not still be confronting these issues, but said there was nothing they could personally do.
And most were just relieved we Iowans are not addressing these same problems in our communities.
As long as we continue to maintain any one of these mindsets, these issues will remain relentless and bolstered by antipathy. This was not the first act of terrorism committed by U.S. citizens against U.S. citizens and I fear it will not be the last.
As a nation, we tend to blame the countries around us for the friction that preserves our anger. Just as Hitler blamed Jewish people, now Muslims are confronted with ill-founded accusations by Americans.
However, regardless of what is occurring outside this nation, these attacks are more often provoked by the acrimonious beliefs of our fellow Americans – based on both historical
and modern attitudes.
Alas, as citizens, we also have to distinguish the line that defines a right to protest. In Charlottesville, a white supremacist group was said to be protesting the removal of a statue of Confederate Gen. Robert E. Lee while carrying torches and screaming racial slurs.
A small group of counter protestors quickly gathered to question the white nationalist association.
Where peaceful protests should have advanced, fights ensued. One woman died and many others were hurt when a car rammed into the crowd of counter protesters. The driver, one of the white supremacists there that day, is under arrest on a murder charge.
Our country has endured generations of hate, spite and racism. The anger that stems from those things has cost us thousands of lives and often any hope of peace.
Despite how despairing this violence may seem, we must move forward.If we ever even hope to aspire to the “American Dream” we claim, America has to stop repeating the worst of our mistake and work together as a united force for change.
Garret Reich is a Senior Reporter for Youth Journalism International.
***
See more viewpoints on Charlottesville from Youth Journalism International students around the U.S. From Connecticut, Max Turgeon writes
that what happened there will make America stronger. From California, where Shannon Yang is concerned about the impact of what happened in Charlottesville on the First Amendment. From Georgia, Madeleine Deisen describes attending a rally in support of the peaceful counter protesters and victimsof violence in Charlottesville.
***
Your can help give a voice to young writers in America and overseas with your tax-deductible contribution. Thank you for being generous.
HelpYJI.org