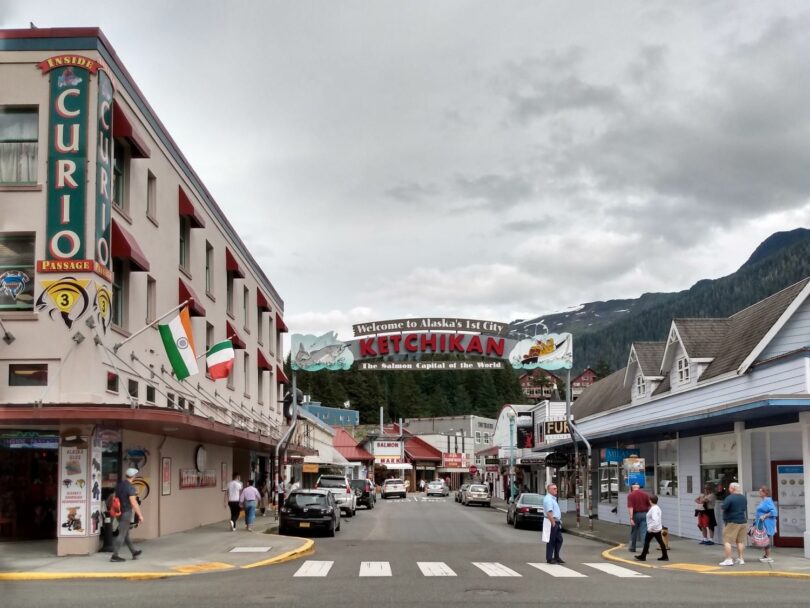 ALASKA – In the midst of a Vancouver heat wave, my family and I shipped off for a week to Alaska.

From charming small towns to towering glaciers, the Last Frontier State provided a welcome respite from the glaring sun and hyperconnectivity of Vancouver.

On a hot summer’s day we boarded the cruise ship Celebrity Eclipse at the Canada Place port in the center of Vancouver, Canada.

As we set sail, we sailed past the iconic Iron Worker’s Memorial Bridge and world-famous Stanley Park.

On the third day of our journey, my family and I arrived in Sitka, Alaska.

The crisp Alaskan breeze welcomed us to this city, which served as the initial capital of Alaska territory, is a quaint fishing town home to no more than 10,000 residents.

Since the days of Russian colonization – before Alaska became a U.S. state – the place has served as a major historical site, with the official transfer of the territory between Russian and the United States taking place here.

Today, Sitka still has remnants of its past. St. Michael’s Cathedral in the heart of downtown is the most prominent example of the lasting Russian influence on the region. It opened in 1848.

A quick stroll from Sitka’s city center is Sitka’s National Historical Park. The park offered two trails for us to walk – a Russian Memorial Trail and a Totem Trail.

Since we wanted to observe the varied history of Alaska’s Indigenous peoples, we chose to walk the Totem Trail. On the trail, we stopped by many totem poles which were donated from village chiefs throughout the Alaskan Southeast. The plaques told us a story of Alaskan Natives seeking diplomacy with American governors. Native elders, according to the information, had donated personal works of art as a sign of trust and friendship.

Lastly, no trip would be complete without recognizing the important role that European settlers had on Alaska – the Sitka Pioneer Home. Initially used as a log barracks for Russians, the Americans converted it to a military outpost because it had become dilapidated over the years.

Local representatives and Congress intervened and rebuilt the structure. Today it stands as a waterfront senior retirement community.

The Hubbard Glacier and Juneau

On the way to the Alaskan capital of Juneau, our ship stopped near the Hubbard Glacier, the largest tidewater glacier in North America.

Extending as far as the eye can see, the Hubbard Glacier reflected the bright sun, even though it was raining.

Our ship’s captain got us within 400 meters of the glacier’s edge – apparently the closest they got this season.

Setting foot in Juneau, the grey skies reminded me of a fall or spring day in Vancouver – during summer. As I walked under my umbrella, the city was lively. Residents didn’t let rain dampen their spirits, eating around a restaurant’s outdoor fireplace. I could see that the Pacific Northwest determination to have a good time no matter what, remains strong in Alaska!

As the capital of Alaska, the city houses the state museum and archives. The state museum had permanent exhibits displaying First Nations’ cultures, Russian Alaska, and the American presence in Alaska.

The Russian Alaska section detailed the settlement timeline, its weaponry, and the Russian treatment of Natives. Despite not getting much coverage, the Russians were not kind to the Native population, treating them with the same disregard as their peasant population back home.

The American section detailed the handover process between Russia and America, Alaska campaigning for statehood and the brutal cultural genocide of the Indigenous population. Missionaries in Alaska had the theory that to “civilize” the American Indians, they had to remove any semblance of their previous culture.

The steps taken to Westernize the First Nations peoples involved burning their villages and forcibly enrolling children in residential schools. In a subsection of the exhibit, the museum showed Natives fighting for non-discrimination legislation and pushing for desegregation – something that you’d usually associate with the American South.

The state archives held a vast number of texts – Senate votes in multiple volumes, election results in localities across many states – I found an entire book by The New York Times which detailed local ward election results in the city – and oil extraction guidelines etc.

Previously home to many now shuttered businesses, many of the previous brick and mortar establishments have been converted into restaurants and repurposed as tourist must-sees.  Gentrification has even reached Alaska, but in a good way.

Our last stop on the cruise was Ketchikan, Alaska, home to a thriving Native population. This city houses much of Alaska’s totem pole collection and is considered the “Alaska’s 1st City.” The city is at the southernmost part of the state and serves as a major port of entry for travelers.

Creek Street used to serve as Ketchikan’s infamous red-light district. Due to local ordinances employing multiple segregation tactics, prostitution was restricted to the “Indian Area” of Ketchikan. This district operated from 1903 to 1954 when the authorities cracked down on sex workers.

Today, many gift shops, restaurants, and informative history plaques dot the street, which is actually a boardwalk held up by stilts.

Although this cruise was only for a week, I was able to get a glimpse into the Russian influences the state holds dearly, the history and troubled relationship of the Native peoples’ to the United States government, and what living in the Frontier State is like.

The views are phenomenal and just as cool as the weather!

Parker Zhang is a Junior Reporter with Youth Journalism International.