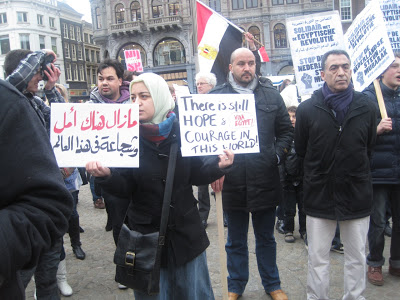 Senior Reporter
Youth Journalism International
AMSTERDAM, Netherlands – Despite very windy conditions, many people gathered on the Dam square in central Amsterdam on Saturday to show their support for pro-democracy protestors in Egypt.
The demonstration was organized by the Dutch Socialist Party and the Dutch branch of the Egyptian April 6 movement, which has played an important role in the protests in Egypt.
The atmosphere was friendly, with musical performances between speeches.

“We are normal people, like everyone else,” said Sharif Osman, member of the April 6 movement, addressing the crowd. “We don’t want to be afraid. We want to decide our destinies for ourselves. These are fundamental rights that everyone is entitled to.”

Echoing protests on the streets of Cairo and Alexandria and other Egyptian cities, much of the focus in Amsterdam centered on demands for Egyptian President Hosni Mubarak to step down.
“Mubarak has become a symbol for everything that is rotten,” Osman said. “We have no trust whatsoever in his intentions or his reforms.”
Many in the crowd seemed to agree, carrying signs that showed their anger at the Mubarak regime and their demands for more freedom and democracy.
“If, indeed, he is planning to leave, why not now?” Osman asked, causing the crowd to cheer in agreement.
All photos by Cara Nelissen/YouthJournalism.org