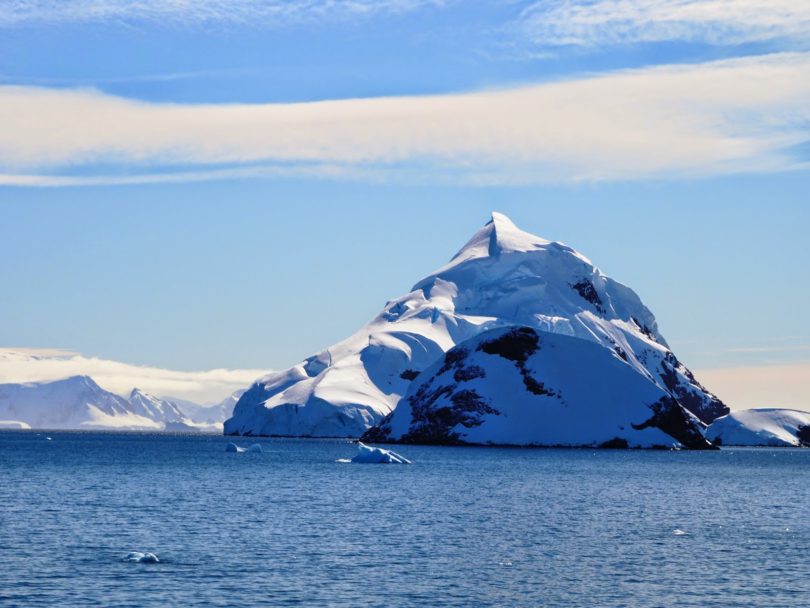 Giant icebergs are part of the beauty of Antarctica. (Antonina Machado/YJI)

ANTARCTICA – A few months ago, my parents invited me to go on an expedition to Antarctica – it was my mom’s dream.

To get me interested, my father gave me a book about the discovery of the seventh continent, explaining the expeditions of Norwegian Roald Amundsen, who was the first to reach the South Pole, and an earlier Antarctic explorer, Ernest Shackleton.

Both traveled more than a century ago.The vessel we traveled in had the same name as Amundsen’s, MV FRAM. I’m glad I decided to go, because the journey never stopped surprising me. 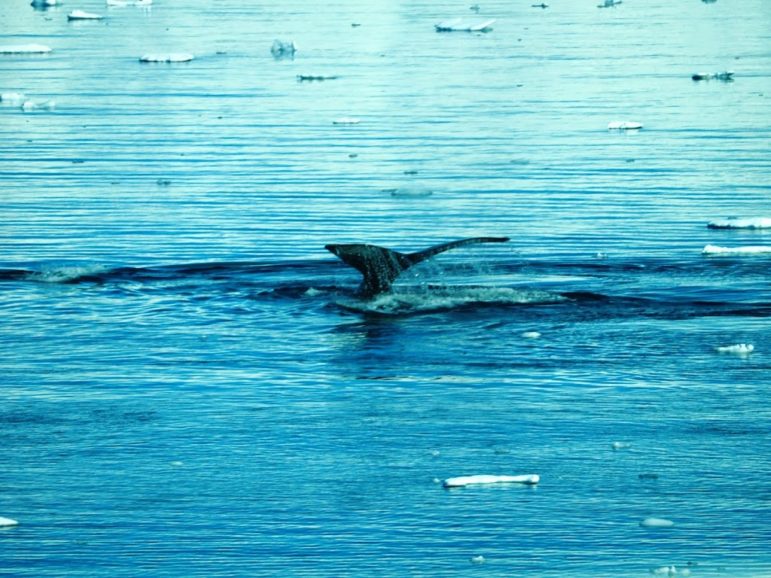 Whales were the first animals encountered on a journey to Antarctica. (Antonina Machado/YJI)

One of my first experiences there were the three whales. They were right in front of the ship, but no one saw them at first.

Only when the captain started talking did we passengers realize the whales were sleeping, just there, floating in the water.

All of us rushed to take pictures out on the frosty deck.

The captain whispered, so as not to wake them, but continued to tell us curiosities.

Between the splashes from the penguins swimming around, and the clicks from the cameras of the astonished tourists, I didn’t know how they could be sleeping. 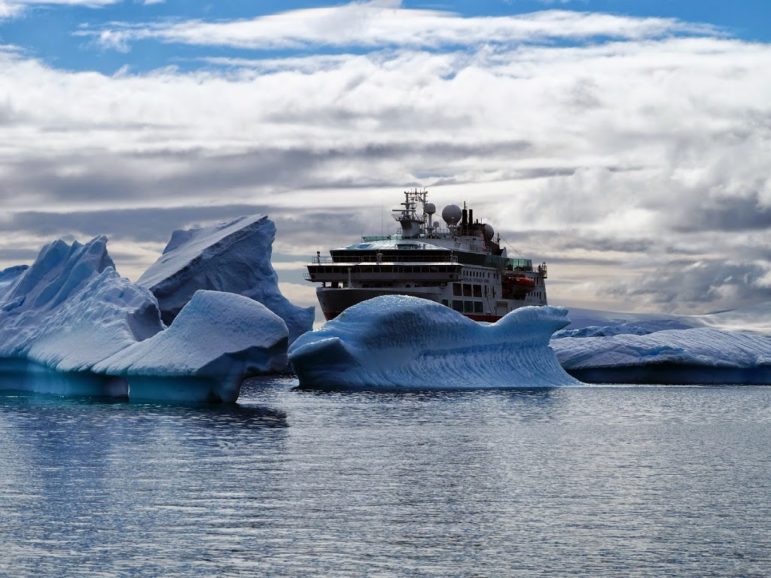 A view of our ship from the shore, where we spent our days. (Antonina Machado/YJI)

Usually, when you go on a trip, you have expectations in mind and ideas about what it’s going to be like.

Antarctica exceeded all of mine.

When I started telling people where I was going for vacation the expression that filled the faces of every single one of them was surprise.

They asked me questions like, “How are you getting there?” or, “Where are you going to stay?” and finally, “Why are you going?”

This last one was definitely the winner, but I can’t blame people for wondering. It’s not every day you talk to someone who is going to such a place.

When I think back, the three words that pop into my head are peace, cold and penguins. Well, maybe whales, too. 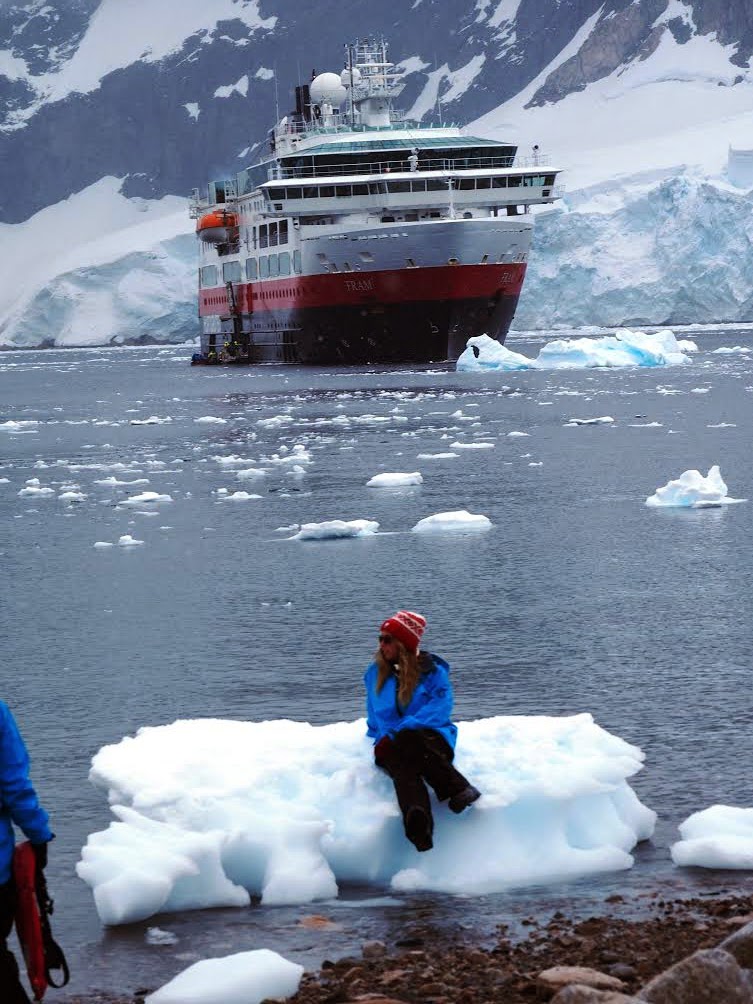 Antonina Machado in Antarctica with the ship in the background. (YJI photo)

What really caught me off-guard, though, was the harmony between all the animals, and in the place itself. 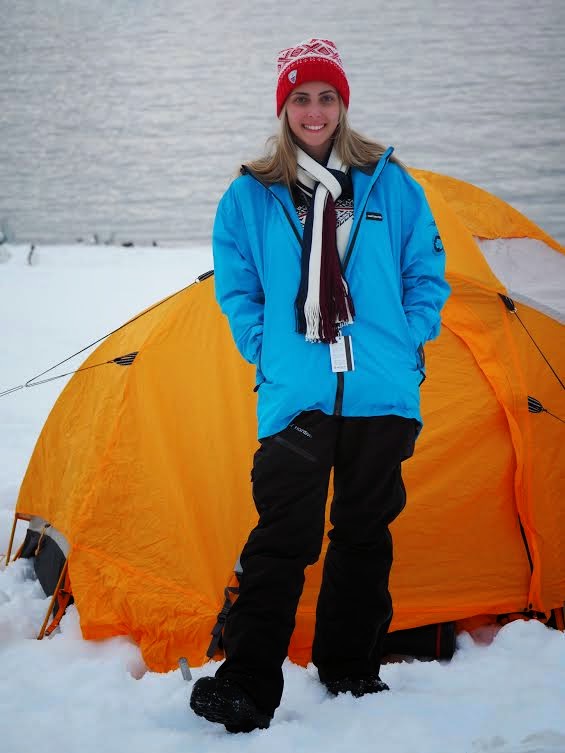 There was no sound pollution, no cars, no malls, just pure nature. Even city lovers may find themselves delighted with the white quiet experienced there.

During the 11 days I spent going from island to island on the continent, I found myself faced with the opportunity to do something special: spend one night camping at Cuverville Island with some of the expedition leaders, a few other people from the boat and the gentoo penguins as neighbors.

We called it the Amundsen experience, but with thermal sleeping bags and tents.

Fortunately for us, that day was the warmest one. It was summer there then, so we got lucky enough to have two degrees Celsius above zero, and sun!

To celebrate the rare event, we went kayaking around the island, alongside the joyous penguins and sleepy wales.

Some people even thought it was warm enough to go for a swim – in totally normal, non-thermal bathing suits – a crazy idea.

At dusk, we started setting up camp, followed by some free time to explore. 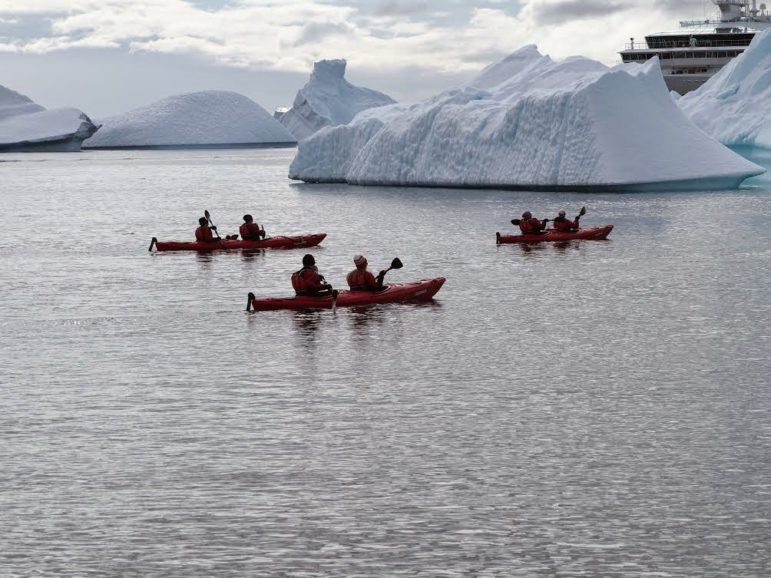 YJI reporter Antonina Machado, in the front seat of the nearest kayak, takes to the icy water on a warm day in Antarctica. (YJI photo) 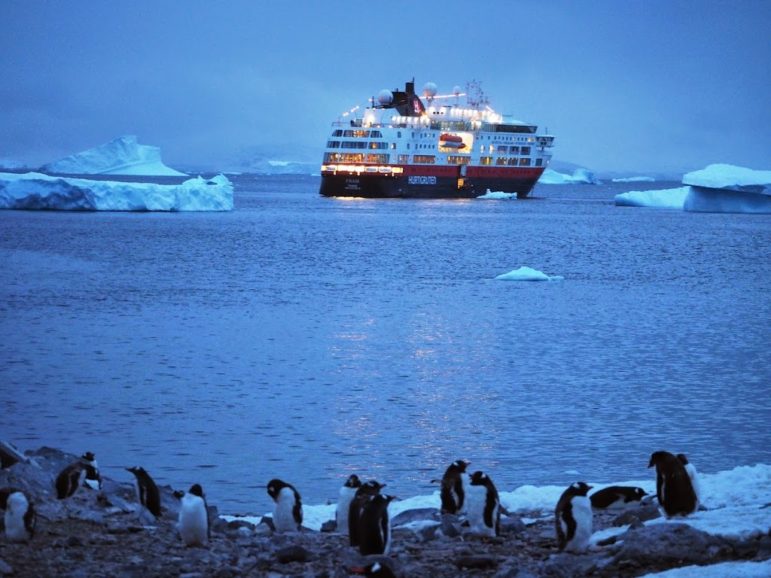 From their camp on Cuverville Island, travelers – and penguins – can see the lights of their ship as darkness descends on Antarctica. (Antonina Machado/YJI) 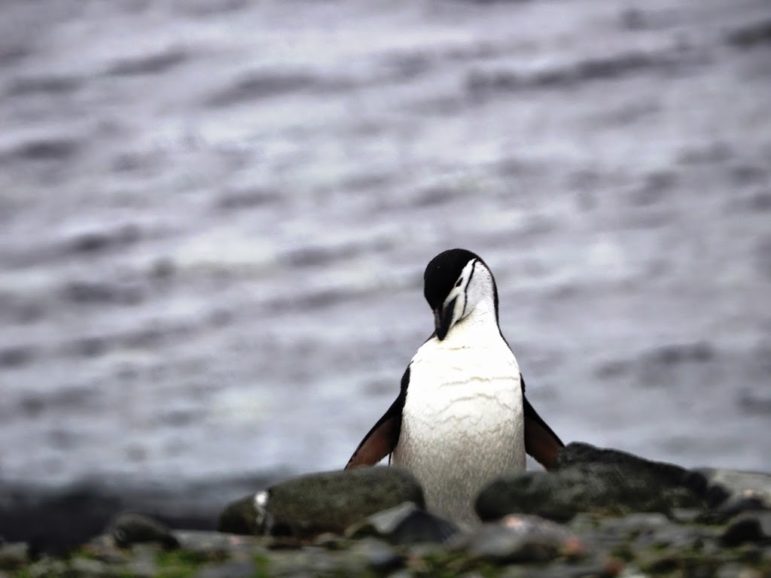 A penguin at rest. (Antonina Machado/YJI)

Penguins are curious animals. If you just sit on a rock and wait a couple of minutes, you will find yourself surrounded by those cute, fat, cold-loving creatures, coming to check you out and bite your boots, like they were asking you to play. 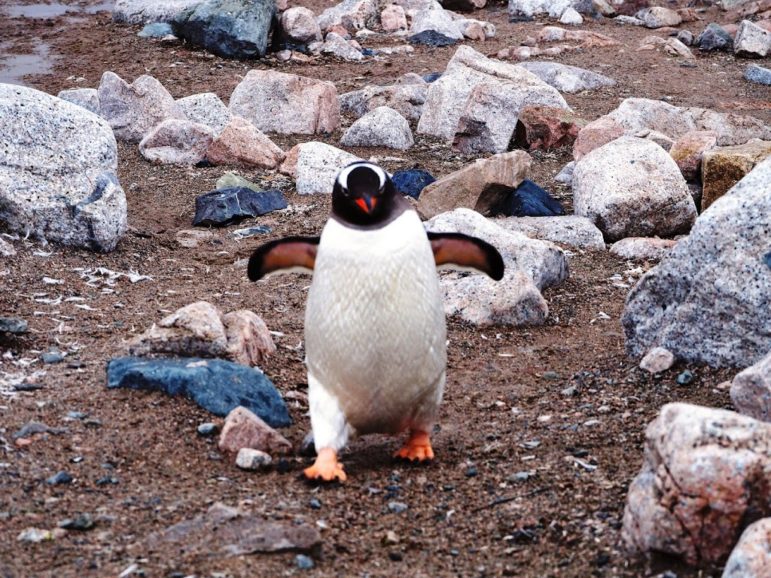 Penguins are curious, friendly animals who interact with visitors to Antarctica. (Antonina Machado/YJI)

Nevertheless, an interesting fact about penguins is their strict bedtime. About 11 o’clock they start gathering and heading into the land.

Then the calm, quiet environment gets a negative feel and you finally perceive you are in the middle of nowhere and even the animals are gone.

It’s a moment of sad loneliness but it goes away as soon as you look up and realize you’ve never actually seen the sky. There are no lights whatsoever and yet it blinds you.

It’s impossible to notice the darkness behind when you can’t take your eyes of all the stars, shining so bright, looking like thousands of fireflies, dancing in front of you, bringing back the magic feel that the place had before.

Unfortunately, the mornings aren’t as wondrous as the nights. There is no need to set your alarm clock there, since you have penguins trying to invade your tent at the first glances of sunlight. 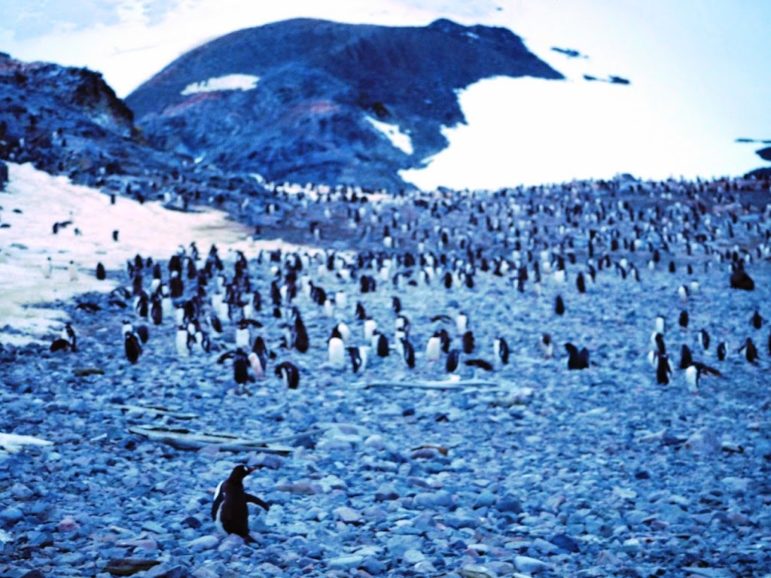 After leaving the camp, we set off to a place where all the scientific bases were. There were bases belonging to Chile and Argentina and I even got a stamp on my passport from the Russian one.

We were able to go inside them, but not allowed to see any of the special equipment they keep. 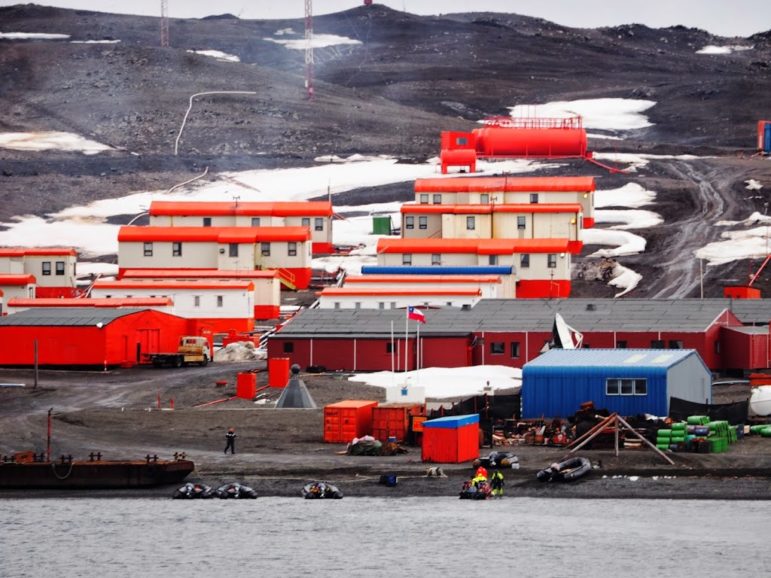 Antarctica is home to scientific bases from many countries. This island hosted bases for Chile, Argentina and Russia. (Antonina Machado/YJI)

Another really amazing place we saw was a Russian Catholic Orthodox church on the top of a hill, there, in Antarctica.

It may be a remote continent, but it’s definitely not forgotten. The scientists and workers there run their own little village. There is a schedule for visitations and souvenirs shops, so you can actually buy a postcard from Antarctica to send to your friends.

Our next destination was a place they called the whales bay, and what a big surprise it was when the captain told us it was actually a volcano. 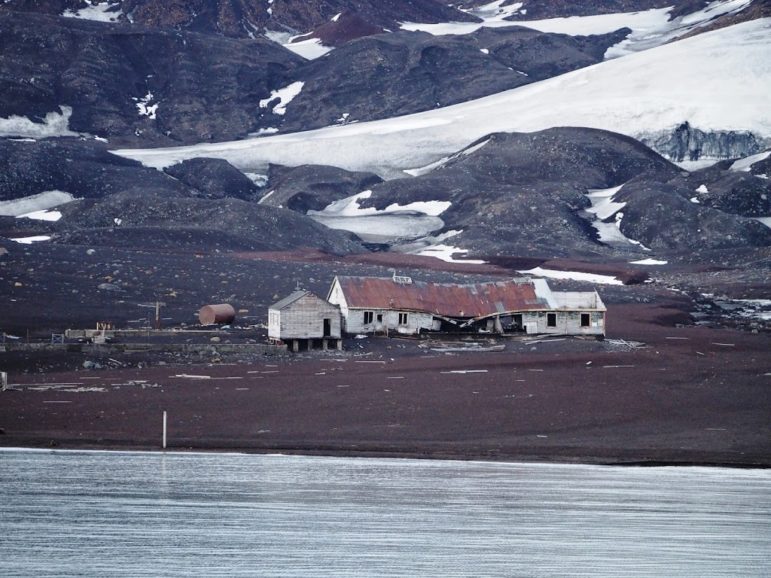 An abandoned building from an old whale oil factory in Antarctica. (Antonina Machado/YJI)

Many decades ago, in its last eruption, the walls collapsed, leaving only a narrow passage to allow ships to go inside it.

There, besides the dazzling surroundings, we were still able to see ancient constructions – whale oil factories and houses and a ghost town, still preserved after all those years.

My journey to Antarctica gave me a roller coaster of emotions. With breathtaking views as our constant scenery, we stopped in places only seen in films. I got to climb a mountain and roll back down, kayak in the frozen sea and now, share this unique experiences with people from all over the world.

My advice to anyone who is planning a trip is to go to Antarctica. It will blow your mind.

Antonina Machado is a Junior Reporter with Youth Journalism International. 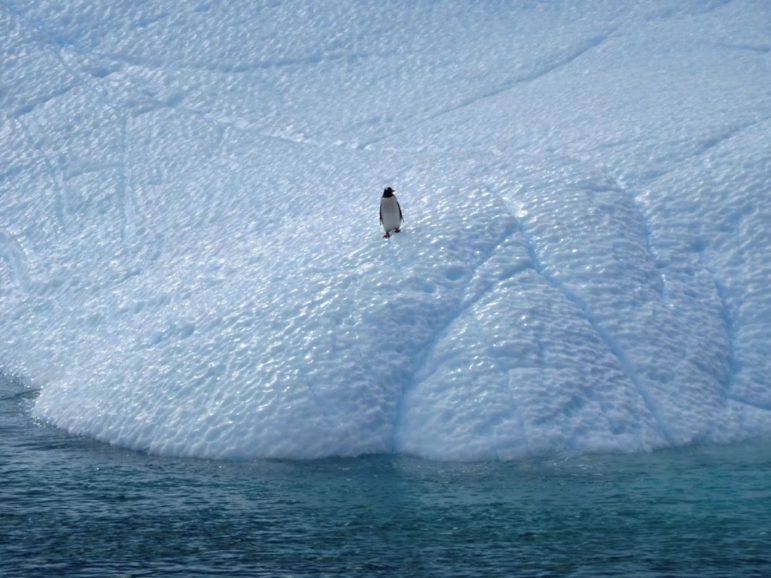 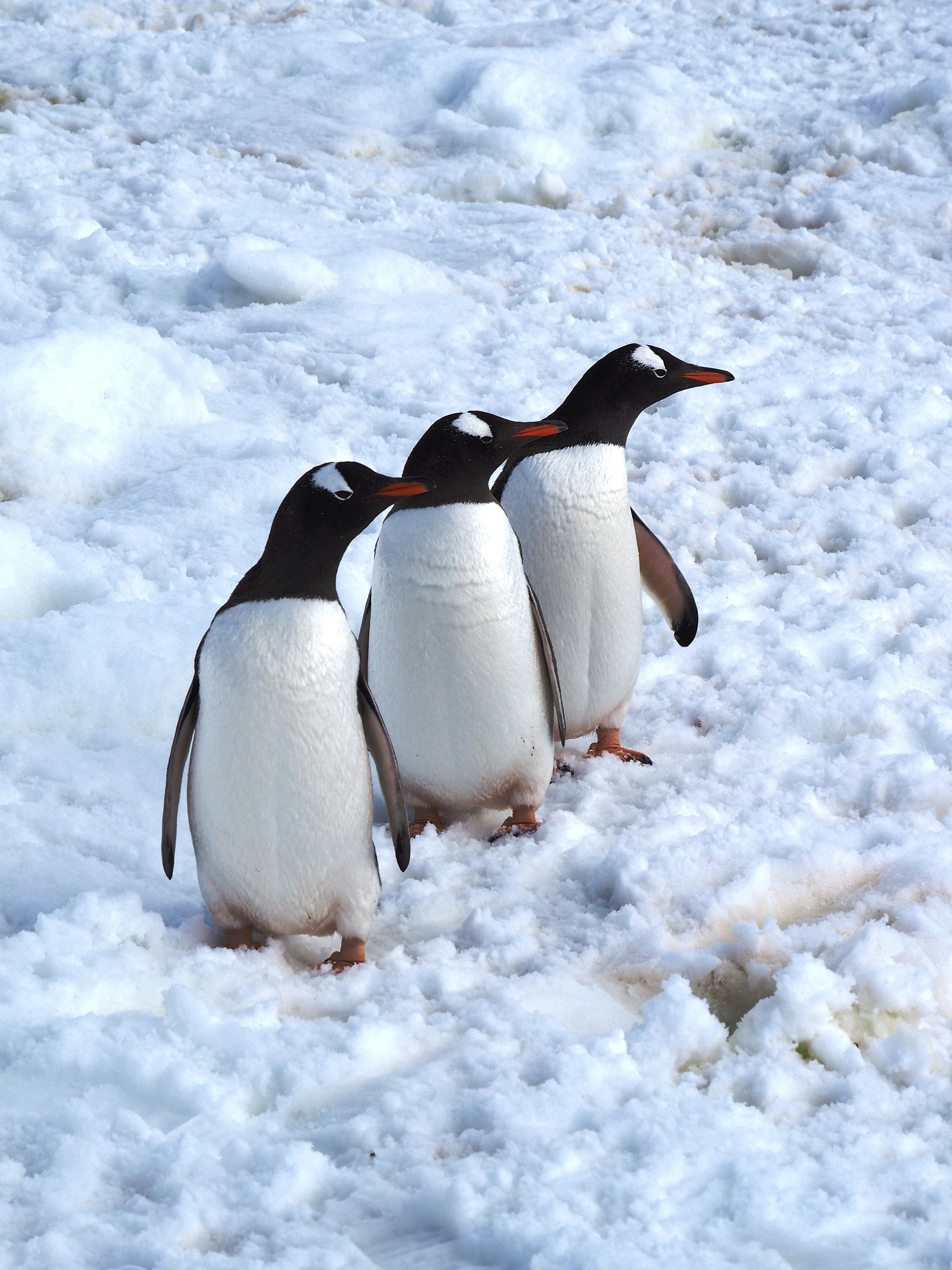