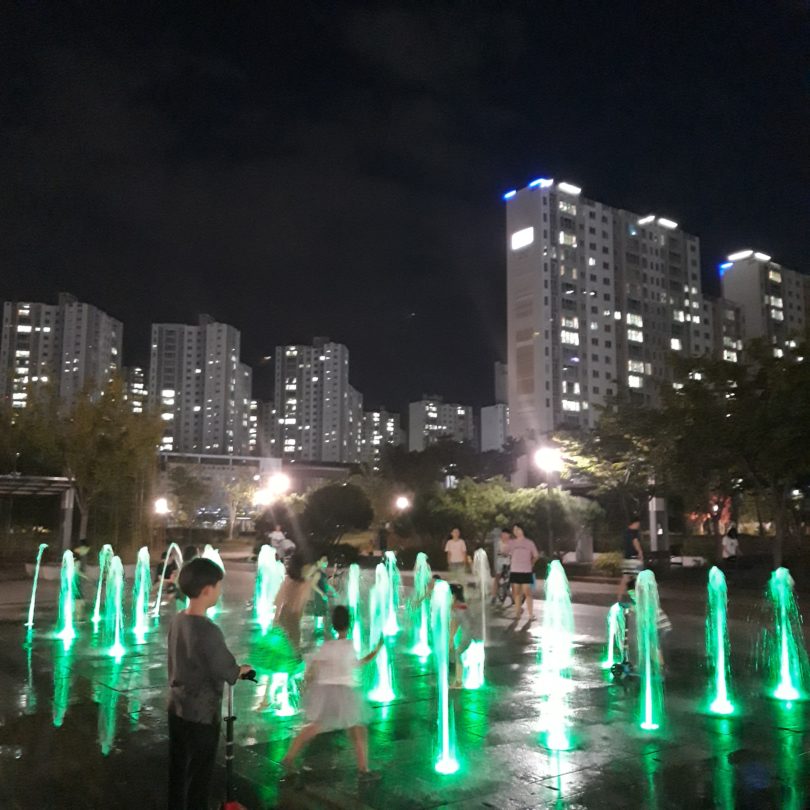 Children play in a fountain in a city park in Gwangju, South Korea. (Kalyn Jang/YJI)

Gwangju, SOUTH KOREA – The city of Gwangju is my home, the place I have lived since I was born.

Gwangju is the city where many people struggled to acquire democracy. Almost 40 years ago, they fought against a dictatorial government, sang a song for democracy and tried to keep their children from being broken by the government. Many people died for democracy here.

Their efforts to get democracy in May 1980 have been shining ever since. But many Korean people gradually forgot about the sacrifice they made. Some people living far from the city even wonder what the uprising was all about.

Gwangju is also a cultural city. It’s common to see a lot of artists who put their efforts in this city. The Gwangju Biennale exhibition is a collection of work by many artists.

Each subject has a deep correlation between people and society. Gwangju citizens like to visit this place and share their comments and feelings about the topic.

My neighborhood is called Sinyongdong. Its name came from a folktale about a dragon that lived on the mountain.

Thus the neighborhood is named ‘Sinyong,’ which means dragonbody in Chinese character. There is even Bok-ryong Mountain in the middle of the neighborhood which really looks like a sleeping dragon.

Sinyongdong is not that big. You might even feel that it is too boring to live there. But although it is just a small neighborhood, almost all of the leisure facilities are here.

If you want to go to the movie theater, just walk 15 minutes along the river and you’ll be at the cinema. If you cross the river which passes through the city, you can get to the sports center where there is swimming, bowling and basketball.

My home is near the park. I like to sit on the grass there and just take in the surrounding view. It’s one of the ways I relieve my stress.

Sometimes I get stressed about the hard education system in South Korea. In South Korea, students are divided into different grades from one to nine. Society judges students based on their grades, whether or not they are passionate about their dreams.

When I first entered high school, I felt a lot of stress about this system, so I visited the park every day, tried to focus on myself and relax.

Most of people around me said that they hate Gwangju because thereare more facilities and other attractions in the capital city of Seoul. Living in Seoul is an academic advantage, many students say.

But I love my city. While the people of Seoul are fussy and indifferent because of the toughness of the world, Gwangju citizens are more mild and warm-hearted.

I also really like the cultural side of Gwangju that promotes artists and gives them the chance to show their work.

Now that I am attending a high school in Naju, a nearby city, I usually only spend about four days a month at home. While I’m away, I yearn for the views in my hometown.

For me, Gwangju, while it might not hold every advantage for students that Seoul does, is a missed place.

Kalyn Jang is a Junior Reporter with Youth JournalismInternational.

Kalyn Jang is a Junior Reporter with Youth Journalism International. She is from Gwangju, South Korea.