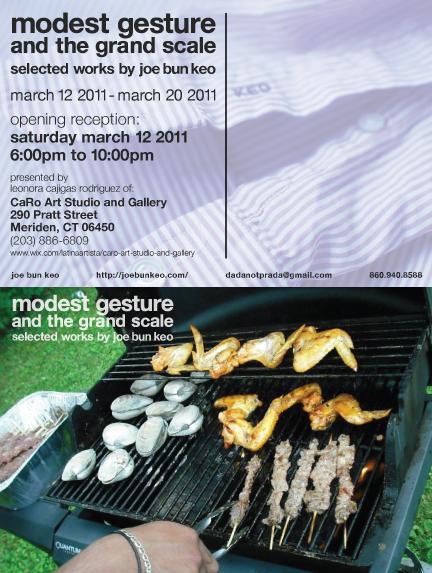 Joe Bun Keo, a YJI Connecticut alum who delighted our readers for many years with his prolific writing and art, created the hilarious and provocative cartoon series called “The Daily Sketch.” (You can see those at this link.) He’s maintained strong ties to YJI since then and is a fiercely loyal supporter.

Lately, Joe has been making a name for himself as a professional artist. A graduate of The University of Hartford art school, Joe is a vigorous advocate for the arts in his hometown of Bristol, Conn. and beyond.

There’s a free opening reception from 6-10 p.m., but making art isn’t free, so I hope most who attend will at least kick in the modest $5 suggested donation to support this young artist and his work.
Joe’s show runs through March 20.

It’s like coming midway into a conversation; finding yourself in that awkward silence with a soundtrack of crickets chirping, and blank faces asking “um…okay…what now?” 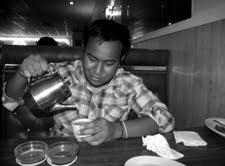 You’re stuck trying to find a resolution; whether it’s by attempting to catch up to speed with everyone else or interjecting with a hasty subject change or an offbeat icebreaker. Things may go awry, fail miserably or they can just move on without consequence.

I flip my misunderstandings and shortcomings in language to turn them into experiments with wordplay.There will be clichés, punch lines, pop culture references and contemporary youth vernacular involved.

I also enjoy the reexamination of what people take for granted.The most mundane of utilitarian objects or overlooked situations can be taken out of the comfort of their given context and shown in a new light.

The end result could be clean, quick, clever, dry, sarcastic, but nevertheless accessible and relevant . The dialogue between the work and audience may seem short, but remnants resonate.
I believe in modest gestures, minor miracles, small victories and second chances… as should you.