BRISTOL, Connecticut, U.S.A. — Most of the city’s teens say Bristol is boring. The usual complaint goes something like this: There’s nothing to do, no place to go, no excitement.
But it hasn’t always been this way, according to Mary D’Alesio, who has lived all of her 100 years in Bristol . D’Alesio knew the city in its prime.
“We had a shop on every corner,” she said. “Today we have nothing in Bristol . Nothing at all.”
At the age of 14, D’Alesio began working at the E. Ingraham Co. clock factory, one of the clock factories that put Bristol on the map at the time. 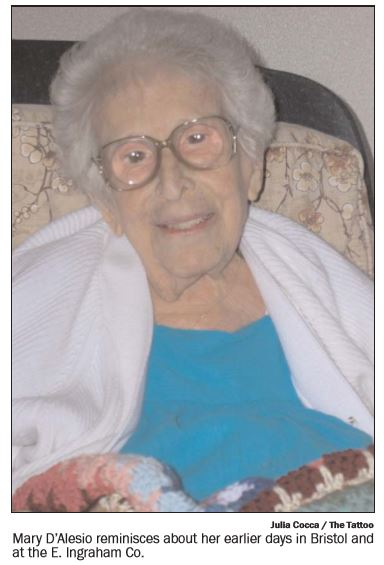 D’Alesio was born to Italian immigrants in Bristol. The date was December 13, 1904, she said, although her papers mistakenly have her birth date recorded as the 11th.
At 14, she said, she “had had enough of school.” So she decided to quit school and find a job.
Her parents didn’t give her a hard time about leaving school, D’Alesio added. “What are they going to do, string me up?”
Still, of her brother and two sisters who chose to stay in school, she said: “They were smart. They graduated.”
D’Alesio applied for a job at the Ingraham clock factory, one of several factories in Bristol at the time.
“There was something about it that drew me there,” she explained.
When D’Alesio went looking for a job at Ingraham’s, there was no real job interview as we think of it today. She simply met with Mr. Porter, the superintendent, and he hired her, she said.
Not surprisingly, a job in the clock factory was hard work, especially for a 14-year-old.
“We had to work 55 hours a week,” she said. “Being a kid, it wasn’t easy.”
Her pay was only $9.25 a week.
There wasn’t much job training to prepare the factory workers, either. “They give you a pair of pliers and a foot press, and they tell you what to do,” said D’Alesio.
Her jobs in the factory changed over time, D’Alesio said. But she started out working on the 3rd floor using a foot press, and spent much of her time with Ingraham’s working on that floor.
She also worked in the plating room at one point. The plating room, she explained, was the room where clock parts were dipped in acid and inspected.
“Oh, my, was that terrible!” D’Alesio said. She didn’t stay in that position for long. “I couldn’t stand the smell.”
Though the work was hard, the working conditions were fine and the employers were good people, said D’Alesio. “If you did your jobs, the bosses were wonderful,” she said. “We did our jobs and we were treated good.”
Even during the Depression, when “you couldn’t get a job if you paid for it,” D’Alesio found help at Ingraham’s.
She had been out of work for five years, since 1929, and by this time she was a married woman with two children. She went to see Mr. Ingraham, who told her he couldn’t do any hiring.
But Eloff Carlson, who had been D’Alesio’s boss when she worked at Ingraham’s before, had been promoted to superintendent. After he told another woman looking for work that there were no jobs available, he offered D’Alesio a position because she’d been such a good worker before.
This time, she worked on the fifth floor as an assembler. Though it was a new job for D’Alesio, her boss was confident she could do it. “He said, ‘You learn your jobs quick,’” she explained.
Assembling involved putting parts in the clocks. There would be 60 clocks in a wooden tray, D’Alesio said, and workers had to assemble a certain number a day and test to see if the alarms worked.
“I didn’t find it hard to pick up what I had to do,” said D’Alesio.
Working with children to care for was hard, though. Fortunately, her employers at Ingraham’s were more understanding than employers might be today.
D’Alesio would walk home during the day to see her children. “We never had a car,” the 100-year-old woman said, adding, “Walking is good for you, believe me.”
Her new boss, Mr. Wines, told her she would have to try to get to work earlier. But when her children were sick, she said, “He knew how to replace me for that day.”
People got along together better in those days than they do now, D’Alesio said.
There were lots of other women working at the factory, she said. She made many friends there as they worked seated together at benches. “I can’t say that I ever had an argument with any of the girls.”
Of course, men worked there, too — for instance, in the case shop, making cabinets for the clocks. But in those days, D’Alesio said, the men behaved themselves. “They didn’t flirt with you,” she said.
There was no dress code, she said, but the women wore dresses. “We didn’t dress like people today,” said D’Alesio.
Both Bristol and its people were a lot different back then, according to D’Alesio.
A woman who went to work in a factory at the age of 14, she says today’s youth are spoiled kids. “The luxury people live in today, they don’t appreciate it,” she said. “The more they get, the more they want.”
Although many things about the present seem to trouble D’Alesio, she still has fond memories of her past — the bustling Bristol she knew as a young woman, and the clock factory where she loved to work.
There were so many factories here when she was young that finding a place to work wasn’t difficult, she said.
But of all the different jobs she worked at over the years, D’Alesio said, “Ingraham’s was my favorite place.”
“I miss those days,” she said. . “I loved the days that I spent at Ingraham’s.”