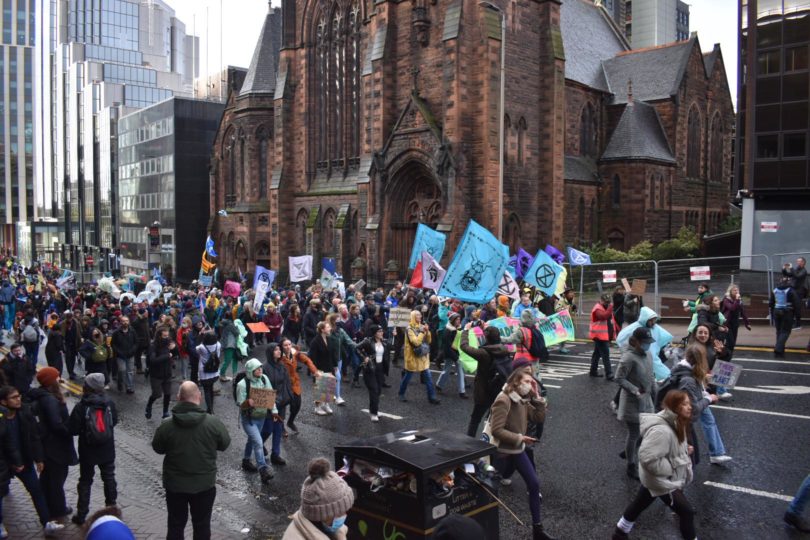 Glasgow, UK – The Global Day of Action for Climate Justice drew people to a protest in Glasgow today to march for imminent action to combat climate change. The protest began in Kelvingrove Park in the west end of Glasgow at noon and set off a march towards Glasgow Green on the city’s east side.

The protest passed largely without incident, as travelers from countries, political parties, and organizations from all around the world joined in on the walk bearing banners, signs, and props to illustrate their message.

Many Scots took part in the event as well,  some shouting messages of support from their window ledges as they watched the colorful procession pass.

Mounted police officers were in much higher numbers than the day before at the Fridays for Future demonstration. Police officers from all around Scotland, and some parts of England and Wales were spotted, called in to provide extra numbers in Glasgow during the United Nations Climate Change Conference, known as COP26.

The “Police Liaison” officers sporting blue-bibs were the most present at key points along the route and on the periphery of the march.

Police weren’t the only emergency service workers at the scene.

Other individuals were as equally fiery as the larger groups.

Gillian Siddons, a colorfully dressed protestor who scaled several statues and structures over the course of the day said, “I think it’s very important that people cooperate and stand together against the evils of greed, corruption and militarism.”

While activists with megaphones reminded the crowds that climate change affected everyone, the physical COP26 conference itself has undeniably impacted Glasgow the most. Stretched to full capacity, the city has seen major extended roadblocks and disruption to daily affairs , but also passionate visitors from around the world.

“It’s really great,” said Hazel Imrie, a student at the University of Glasgow. “I think it’s one of the things I’m most proud of about Glasgow is how international we are and how we can all band together for things like this.”

When asked about her feelings on the conference, Imrie said, “I’d like to say (I’m) optimistic, I think this one will be different, but how different I’m not sure. I think there’s still a lot more that is needed to be done.”

(Story continues below the photos)

Demonstrators taking part in the Global Day of Action for Climate Justice ended their protest in Glasgow at the Glasgow Green in the late afternoon. As it got dark, a band dressed entirely in gold played brass instruments for an amused audience, and notable climate activists took to a stage to close the event.

They ended with a combined message of pride and optimism at the turnout and energy, but also a clear call to action for protestors to ensure governments and corporations were held accountable and stuck to their promises for a cleaner energy future and a saved climate.

Owen Ferguson is a Senior Correspondent with Youth Journalism International from Scotland, UK.