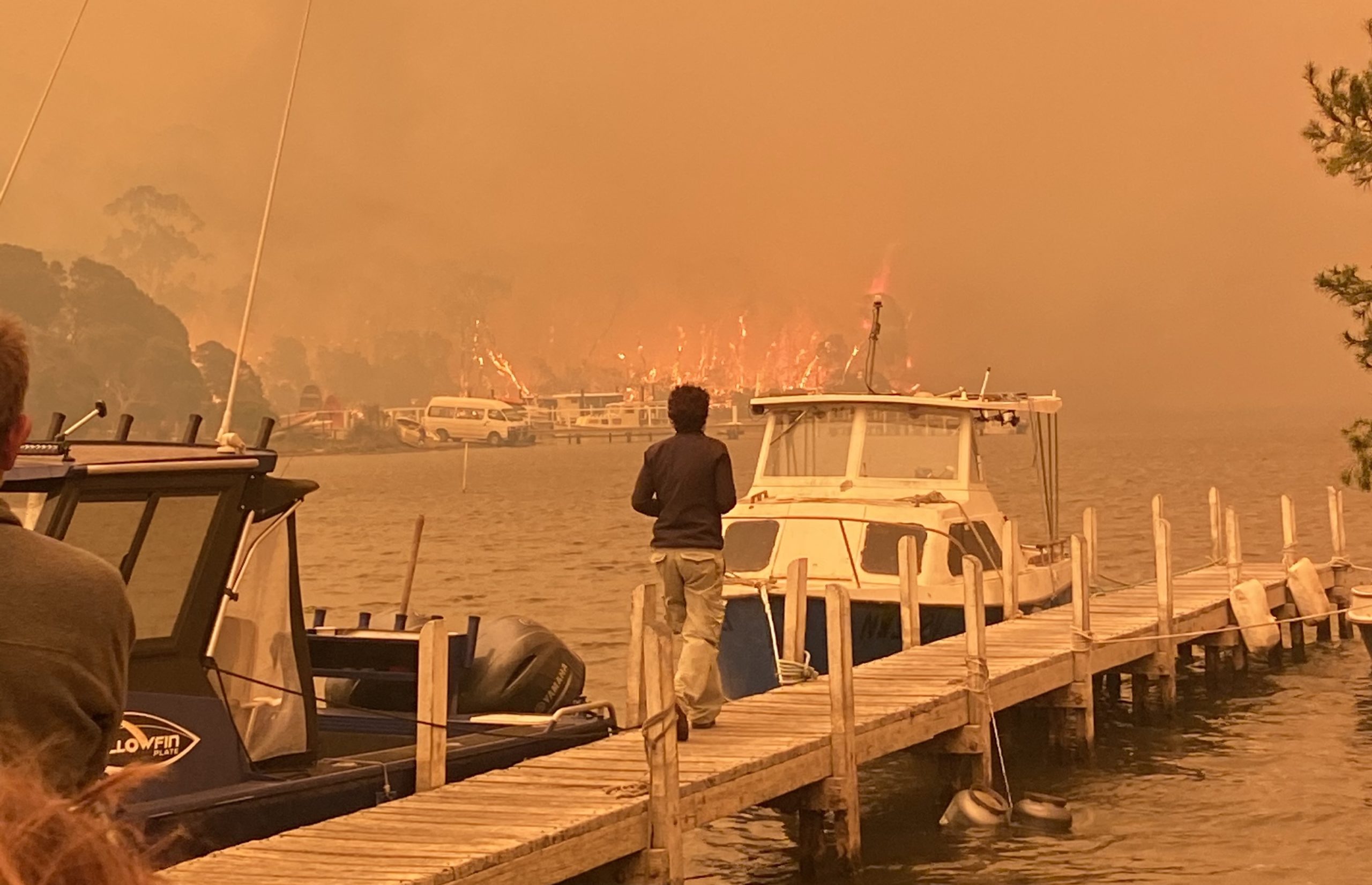 People watch on from Mallacoota’s pier as fire surrounds the coastal destination.  (Photo by Billilee Williams. Used with permission.)

Australia is in the midst of a bushfire crisis, a summer that can’t be compared to any other. Tens of thousands have been forced to evacuate their homes and holiday destinations, while millions more breathe in hazardous air across the country.

For 17-year-old Billilee Williams, the fires turned her family holiday on the coastal town of Mallacoota into a tense nightmare of thick smoke and burning ash.

Mallacoota is a small town in Victoria’s Gippsland region, in the southeast of the state. The community, accessible by one road in and out, boasts just over 1,000 locals. But, in peak periods such as the current summer holidays, it can be home to an extra 8,000 tourists.

Residents and tourists in Mallacoota awoke on Monday, Dec. 30 to discover the bushfire crisis was heading their way.

The sky was full of thick grey smoke and the state’s VicEmergency mobile app was sending alert after alert to those within the small township.

“All you could see was the bright orange glow of the fire,” said Williams, an Ararat College student. Her family holidays were about to take a turn for the worst.

Late in the afternoon, the community met at the pier, along with police, ambulance services and Country Fire Authority members.

Emergency responders spoke to the crowd, calming many nerves but also admitting that they themselves didn’t know where the fire was. They told the assembled that the fire was expected to hit the township at midnight.

“We waited and waited, it didn’t hit,” Williams said. “Then we were told 3 a.m. We continued to wait.” 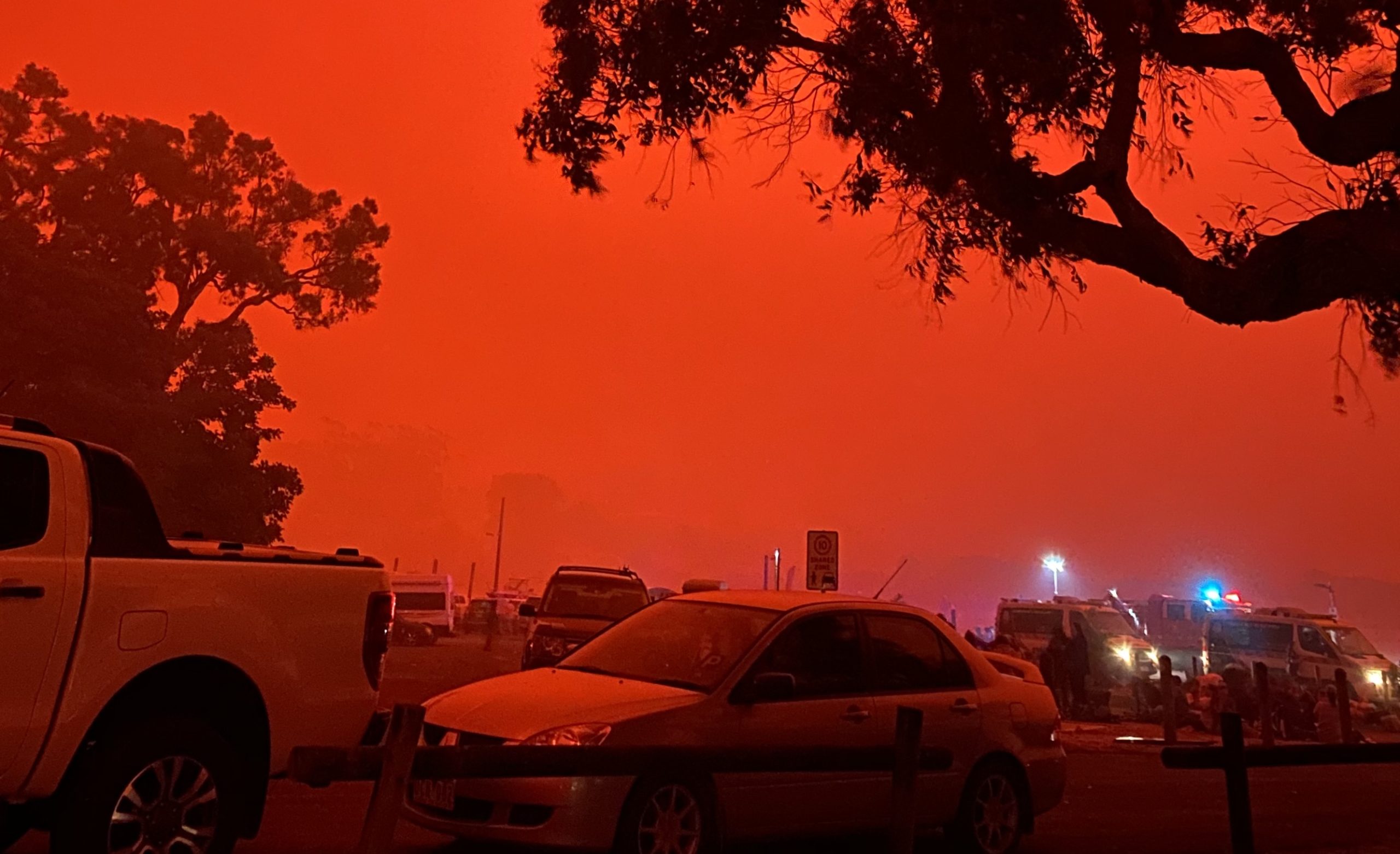 Mallacoota is put into darkness, with nothing but an orange glow on the hazed horizon. (Photo by Billilee Williams. Used with permission.)

She awoke at 6 a.m. to an orange horizon, caused by the growing fires and not the expected sun. The fire hadn’t arrived just yet but “ash was falling from the sky like rain,” she said.

“At 8 a.m., the fire hit the town. People were frightened and worried. The smoke was still extremely thick,” Williams said. “the sky still pitch black. I was unable to see anything but the bright orange glow of the fires.”

She continued, “No matter where you stood you could see flames everywhere. People start running to places along the pier and boat ramps to see a better view.” 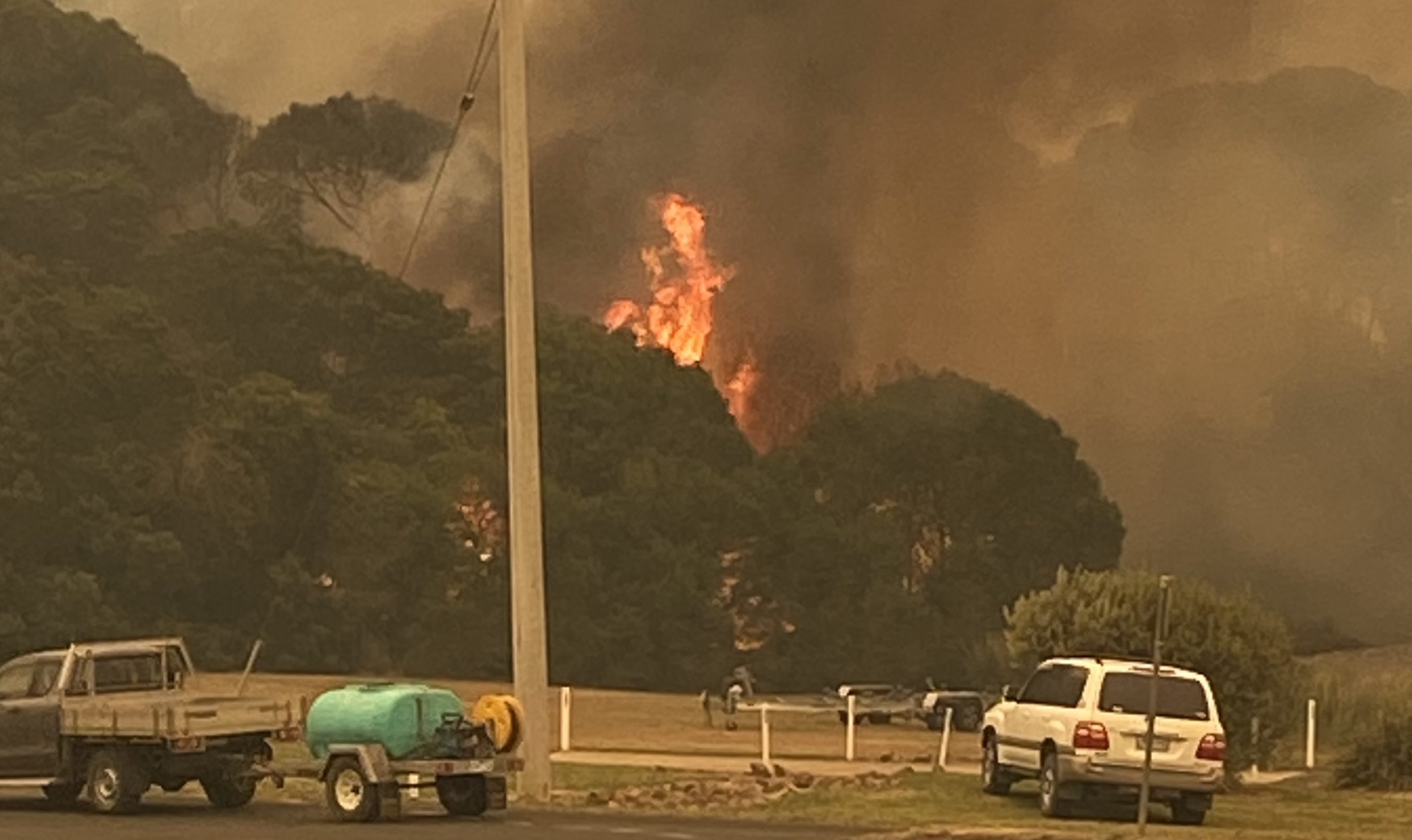 Flames move towards the town of Mallacoota before a wind change alters its direction. (Photo by Billilee Williams. Used with permission.)

Emergency services and a wind change helped stop the fire from moving into the center of town. Country Fire Authority Chief Officer Steve Warrington said the change meant that the fire bypassed most of the town, only affecting the outskirts. Locals and tourists were now isolated. The one road in and out was not accessible.

“We had the opportunity after the fires had passed Mallacoota to drive around town and see all the damage … houses burnt down to the ground with just a few bricks still holding together, if any at all,” Williams said.

“Most of the town was black, covered in ash. It was absolutely devastating.”

Her family’s boat was destroyed at their camping site.

As the conditions died down it was clear that many locations across Gippsland had been isolated — cut off from travel by fire damage and fallen trees. The Victorian Government needed help. Premier Daniel Andrews asked Prime Minister Scott Morrison for military assistance.

Australia’s Navy deployed ships and helicopters in hope of rescuing thousands stranded by the fires, including the 4,000 in Mallacoota.

Two Navy ships, the HMAS Choules and the MV Sycamore, set sail, arriving off the coast of Mallacoota on Wednesday evening, Jan. 1. At the same time, stranded residents and holidaymakers like Williams’ family were registering for a spot on one of the vessels.

They were told they could either register to leave or stay trapped in Mallacoota for at least another two weeks. Williams and her family – except for her grandpa who wanted to stay behind and help – decided it was time to get out before conditions worsened again.

“It was an early start the next morning,” she said. “Getting the bus down to the boat ramp, to get a smaller Navy boat to take us to the ship.”

MV Sycamore left for the town of Hastings on the Mornington Peninsula first, carrying 58 people, according to the Emergency Management Control Centre. The ship docked around 20 hours later, followed by the primary evacuation vessel HMAS Choules later in the day. For many it meant their holiday from hell was over.

“The crew on the Navy ship were honestly amazing and I couldn’t thank them enough for their support,” Williams said. “They supported us when we weren’t feeling the best or if we needed to talk to someone.” 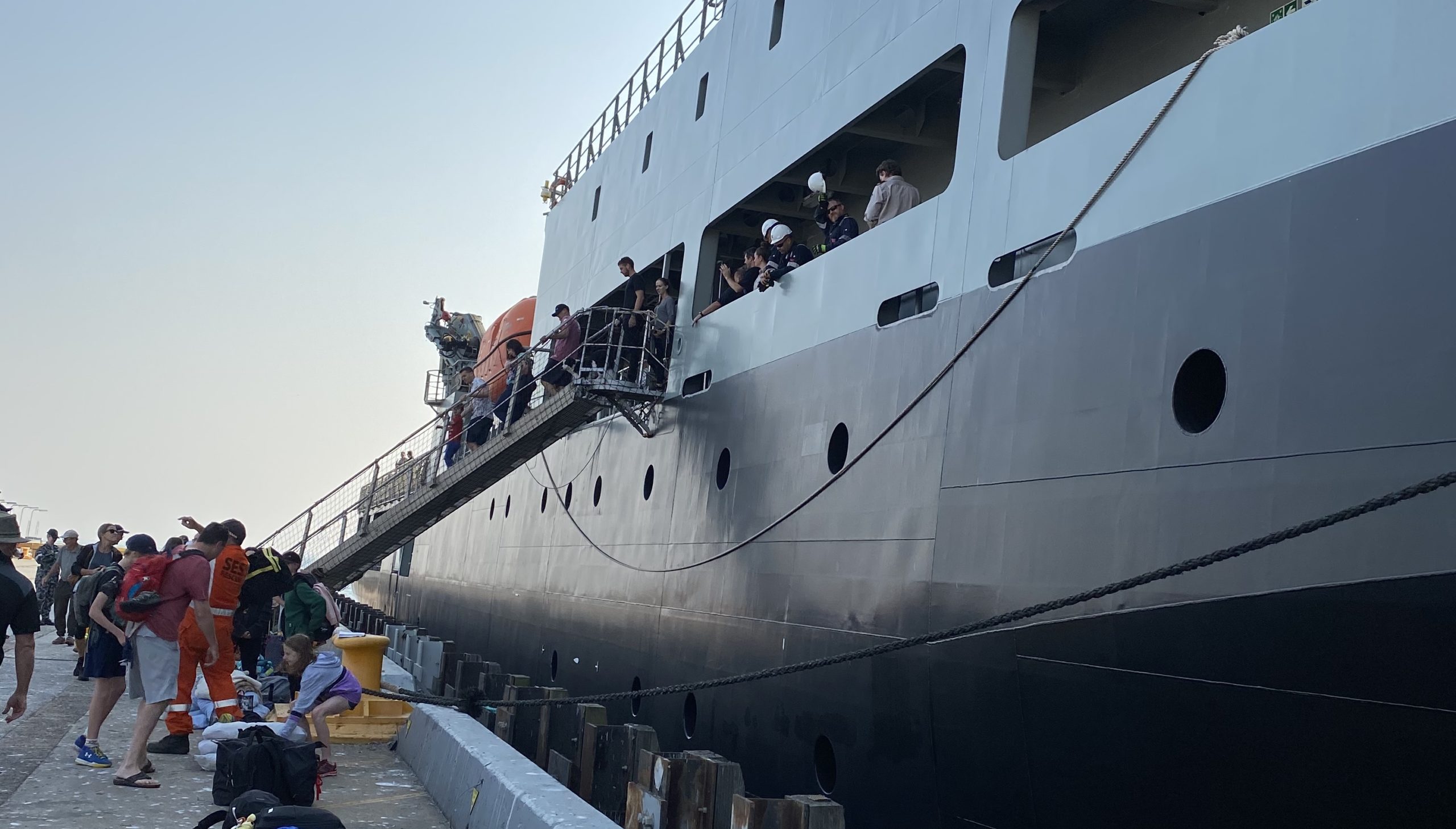 No one in Australia has been spared by these unprecedented conditions. Victoria, New South Wales, South Australia, Queensland, Tasmania, Western Australia, Australian Capital Territory and the Northern Territory have all been impacted in the past two months with no end in sight.

More than 20 people nationwide have lost their lives so far and more are unaccounted for in the state of Victoria. Australians are overwhelmed, habitats are destroyed and families are left picking up the pieces.

Thousands still remain in the isolated community of Mallacoota where Williams and her family had gone for vacation, according to the Australian Defence Force’s Major General Elwood. The Navy said its vessels are now returning for round two, while many young children and the elderly wait for conditions to improve so they can be airlifted out. This process has already been delayed due to heavy smoke.

Morrison, the prime minister, also announced further support from the Australian Defence Force during a press conference yesterday. Another large Navy ship and more aircraft will be deployed and up to 3,000 Army reserves moved into affected areas. This is Australia’s biggest disaster response in history.

On Friday, Jan. 3, the situation in Australia once again intensified. Heat and strong winds putting further communities in danger. By this point, the Australian fires had burned nearly 6 million hectares, compared with the California wildfires of 2018, which burned about 766,000 hectares.

Mallacoota was once again put into darkness by smoke in the middle of today. Billilee Williams is just hoping her grandpa stays safe.

Jack Ward is a Correspondent with Youth Journalism International.