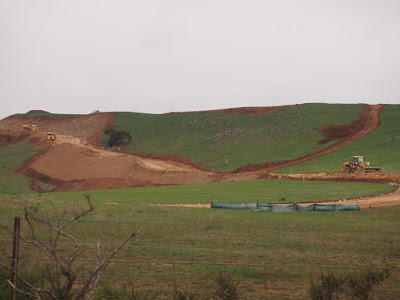 Trucks and other machinery move dirt in preparation for the new Ararat Wind Farm in Victoria, Australia. (Jack Ward/YJI)

ARARAT, Victoria, Australia – The wind sweeping across the rural landscape here is about to be put to use.

A new wind farm is under construction about 180km, or about 112 miles, northwest of Melbourne.

Daniel Andrews, Victoria’s premier, visited Ararat recently for a “Bring on the Blades” event with local students to welcome the delivery of the first blade for the Ararat Wind Farm.

“The wind farm  will help our natural resources and support the surrounding country towns,” said Tara Charlesworth, 12, a student at Ararat College. She was present for the June 15 event at Kokoda Park in Ararat. “Bring on the Blades attracted a large crowd of young and old and speakers included students.

A big part of the development is to get Ararat’s next generation involved, and one way this is being done is having schools make time capsules.
School Captain Ivana Donnan spoke on behalf of Ararat West Primary School.

A truck carries a blade for the Ararat Wind Farm. Blades are coming from Portland, Australia to Ararat as the wind farm is built. (Jack Ward/YJI)

“In teams, students brainstormed ideas of items we wanted to put in the capsule,” said Donnan. “We came up with the following; A local and national newspaper to show current events, a supermarket catalogue to show the current prices of everyday items, letters describing the best things about living in Ararat, photos, food packaging, a DVD and artworks from students in our school.”

The blade’s arrival was a big milestone in the development of the wind farm, which is going to be the third largest in Australia, with 75 turbines, each 135 meters tall, or about 443 feet.
Construction is expected to take two years, according to developer Renewable Energy Systems, with 165 workers employed.
The development doesn’t come cheap, costing around $450 million Australian dollars but the project is expected to inject between $7 and $8 million dollars into the community during the two years, according to information provided by Renewable Energy Systems.
Twelve-year-old Khloe Campbell, also a student at Ararat College, said she thought the wind farm event was great. 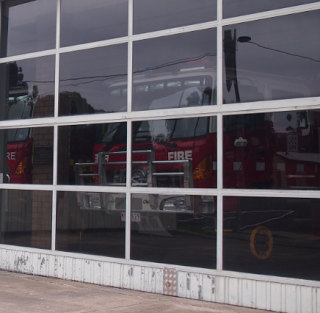 Volunteers with the Country Fire Authority were furious over an agreement that put the United Firefighters Union in charge of protecting the Ararat Wind Farm. (Jack Ward/YJI)

“It is going to help Ararat and that is good,” Campbell said.

Volunteers with the Country Fire Authority who would normally respond to fires on the wind farm land – and the rest of regional Victoria – attended Bring on the Blades, but in protest. More than 60 firefighters from the region came to voice their anger to the government about a proposed agreement with the United Fire Fighters.

If the agreement goes ahead, the union will take operational control at incidents, rather than the volunteers.
The volunteers circled Kokoda Park all morning during the event and it was quite visible that they weren’t happy.
Afterward, Andrews told reporters he had talked with Ararat Fire Brigade captains to work through their concerns.
“For the government to treat volunteers in this way is absolutely disgusting,” he said.
Jack Ward is a Junior Reporter for Youth Journalism International.
***
Your tax-deductible contributions help students
supported by this non-profit organization.
HelpYJI.org