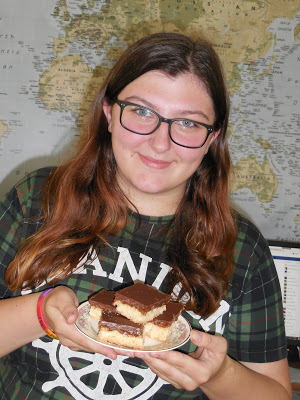 Youth Journalism International Junior Reporter Beth Criado-Band at YJI headquarters with her own Moxie Millionaires' Shortbread, just before entering it in the Moxie Festival recipe contest.. (YJI)
LISBON, Maine, U.S.A. – When I first tried Moxie, nobody told me you were supposed to take three sips to know if you like it. I chugged it, and found it delicious; having not experienced the bitter aftertaste that comes with letting it linger in the mouth for too long. 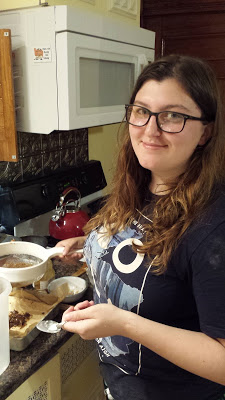 Beth Criado-Band working in the kitchen on her Moxie caramel sauce. (YJI)

After that first gulp, I declared my love for this old New England soda. A controversial stance around here, but I’ve mostly kept to it.

Fast forward a week or two, and I found myself entering my own Moxie Millionaires’ Shortbread in a Moxie recipe contest in the annual Moxie Festival in Lisbon, Maine in July.
I’d spent hours in the kitchen thinking that my Scottishness would translate into a knack for baking shortbread. But nothing could have been further from the truth.  Both batches came out less than perfect – though the second came out mostly solid. That would have to do.

My idea for the caramel came from a “healthspo” – a fun anti-cola video that showed a soft drink poured into a saucepan under a flame. The result, of course, was that the water evaporated and the cola reduced into a sugary, tar-like substance. Instead of being repulsed – which was the point of the video – I was grossly interested. This would be my Moxie caramel.
What the video neglected to mention was that it does not take seconds for the cola to reduce. It took well over an hour for the Moxie to look anything like caramel. And that was after I gave up and threw in a questionable amount of cornstarch to thicken the mess.
Thankfully, the topping was just pure milk chocolate, which covered the lumpy shortbread and patchy caramel. The finished shortbread looked
pretty good!
Arriving at Chummy’s Diner in tiny Lisbon, I had no idea what to expect. Seven people? Seven hundred people? 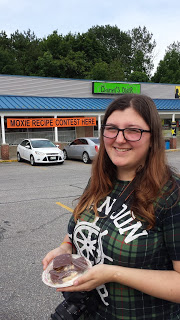 Outside Chummy’s Diner, which hosted the recipe contest. (YJI)

The contest included three categories – appetizers, main dishes and desserts – and prizes for the top three winners in each one.

When we arrived, I was met with the following; two appetizers, three main meals, and my  category? Four. There were four dessert entrants.

Someone wasn’t going to win.

The Moxie Millionaires’ Shortbread, just before the chocolate layer was added. (Beth Criado-Band/YJI)

The competition was fierce. Moxie taffy, sweet potato Moxie doughnut with bacon crumbles, and a Moxie three-hole poke cake all competed with my shortbread.

Having only tried the shortbread minutes before heading out – always a winning strategy – we all found it to be pretty good. I had a chance of winning this.

The contenders in the dessert category, from left, donuts, cake, shortbread and taffy. (YJI)

Unfortunately, the judges’ criteria didn’t revolve around how good the flavor was, but rather how ‘Moxie’ it tasted. What did Moxie add to the dish? Would it convert a Moxie hater into a Moxie-head? Can you taste the Moxie?
All of those were a big no in the case of my shortbread. That’s probably why it tasted so good.
The couple beside me told me they had used two liters of the stuff in their winning Moxie chicken wings. Me? I only used a cup. The Moxie was undetectable. I was going to be the one loser in the entire event, the only person to leave with nothing. 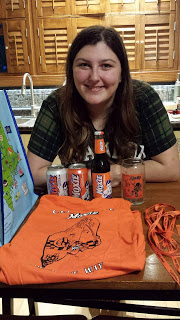 Beth Criado-Band with her Moxie swag, most of it the spoils from her recipe contest victory. (YJI)

Well, sorry doughnuts, but a Scot has taken your place as one of the Mainers. I came third. I won a pair of Moxie shoelaces, a 2016-branded Moxie cup and a Maine bag, but surprisingly, no honorary citizenship. We left shortly after receiving the winnings and pinching some more taffy. 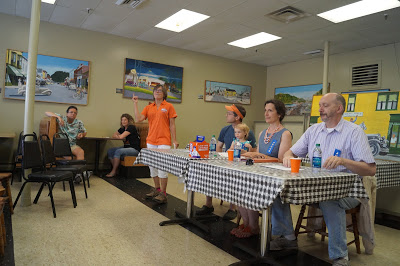 A panel of Moxie-loving judges took the contest seriously. (YJI)

I take back everything I said about Moxie. I will admit, however, that the contest was a little strange. Seemingly everyone knew each other – but that should’ve been expected.

Moxie in itself is strange, from its flavor – which could be described as a fizzy, bitter cough syrup – to its beautifully androgynous, autocratic mascot.
I like Moxie’s weird vibe. I love Irn Bru, our own local Scottish soda, but when I’m in Maine and there’s nary an Irn Bru to be found, I’ll be drinking Moxie.
Beth Criado-Band is a Junior Reporter for Youth Journalism International.


Check out Beth Criado-Band’s Moxie Festival video, which has scenes from the recipe contest.
***
What is Moxie? It’s standing up for youth and truth and making a tax-deductible contribution to support YJI’s young writers and artists. You’ve got this.
HelpYJI.org