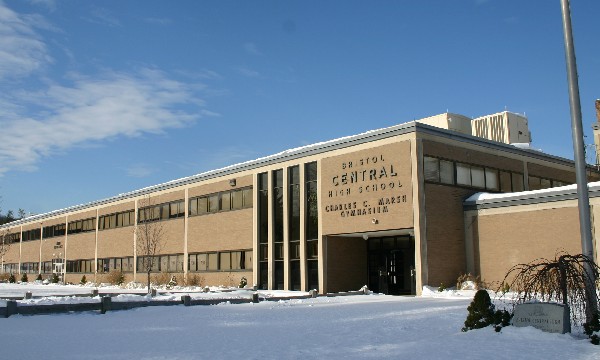 The writer of this story is a student at the private, single-sex Miss Porter’s School in Farmington, Connecticut (and former Memorial Boulevard Middle School student), who recently spent a day at Bristol Central High School.

Bristol, Connecticut, U.S.A. — Upon entering the walls lined with maroon lockers, I found myself doing double take after double take with people I had not seen for two years.

Some of these encounters were hilarious.

As I passed one old acquaintance in the hall, he and I made eye contact — then we spun around and continued on our way, remembering our mutual dislike for each other.

Spending the day at Central as an indifferent bystander pushed a lot of things done privately at Miss Porter’s into the surface of my mind.

At Miss Porter’s, it is estimated that over half of the students smoke cigarettes.

Because smoking is forbidden at Miss Porter’s, it is hard for boarders to find places completely secluded from any passing faculty.

Not that this stops people from smoking their Marlboro Mediums, but is seldom talked about for fear of being restricted to campus or suspended.

At Central, students’ guardians are not present at school and topics such as smoking or alcohol can be openly discussed.

Another thing I immediately noticed was the absence of political correctness.

“Gay” was constantly used as an insult. At Miss Porter’s, there probably is not a single student who would not be quick to challenge the tormentor.

When people noticed or remembered my quickness at defending certain populations or opinions, I was introduced as a “liberal feminist.”

I had forgotten how unusual an identity this had been at Memorial Boulevard, because my current school is populated almost entirely with open-minded feminists.

In a way, Central was much stricter, because it operated with bells, bathroom monitors and hall passes. But there was underlying chaos that might not be noticed.

Despite Central’s efforts to achieve order, Miss Porter’s has been more successful, in part because students seem to have more respect for their teachers.

The difference in apparel at the two schools was particularly striking.

At Miss Porter’s, often students do not even look in the mirror before going to classes. Students there are quite content in flannels.

So it was a shock to suddenly be confronted with dresses, tucked-in shirts nd styled hair.

Teenagers, particularly girls, are considered to be under a great deal of stress.

The students at Central and Miss Porter’s both suffer from approximately the same amounts of stress. However, the concentration of pressure come from different sources.

At Central, the stress seemed to mainly be caused by social pressure — partly because of the presence of the opposite sex.

The stress at Miss Porter’s focuses centrally around academics and the hardships caused from being away from home.

Before actually absorbing the atmosphere of a school by spending time there, the only basis we can have for our opinions of a school can be from public rumors.

The biggest surprise for a visitor from Miss Porter’s might be the general openness and easy acceptance.

At Central, the students were much more caring and supportive of each other than the common opinion declares.

Rachel Jennings is a Reporter for Youth Journalism International.