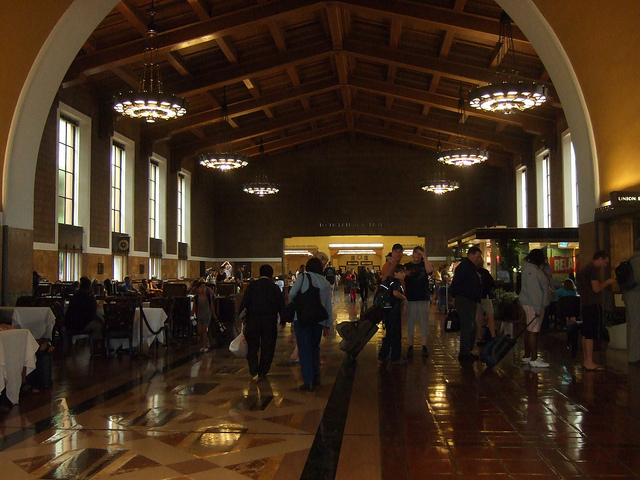 LOS ANGELES, California, U.S.A. – Despite stereotypes of Los Angeles most often seen on MTV’s “The Hills,” the city has as much heart and life as it spans in square miles.
That’s 498.3 square miles, if you must know.
I used to detest where I came from, but exploring Los Angeles has given me a new appreciation for the city and its people, although not enough to stop me from wanting to move to other countries and states to explore.
I can’t think of any better way to introduce my hometown than by documenting my trek from my house in the suburbs to my summer internship in the center of the metropolis on Wilshire Boulevard. 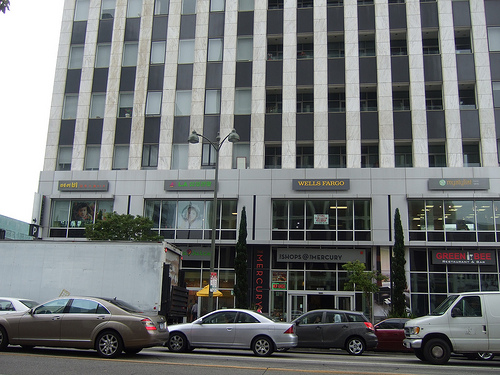 Outside the Wilshire and Western Station (Elaine Truong/YJI)

8:00 a.m. – As I leave my house in the quiet suburbs in the San Gabriel Valley towards the Downtown Los Angeles Union Station, I make sure to bring my TAP card, or transit access pass, which is used for the Metro public transportation.
8:20 a.m. – The Union Station is one of the busiest and most crowded places I have ever visited in Los Angeles. People are constantly shuffling around. Racing with my friend down the packed and super-long staircase to the subway, we try to make it in time for The Purple Line train to take us to the Wilshire and Western station.
8:40 a.m. – The outside of the Wilshire and Western station is where busy city life begins. Although Los Angeles at the noisiest time of the day is still much quieter than say, midtown New York City, at the peak of tourist season.
People of all kinds board the 20, which is the bus I take to my destination. Public transportation, as I imagine in other places as well, is one of the most intriguing parts of a city. There are schizophrenics, handicaps, nice homeless people, business people, Zac Efron-look-a-likes, and virtually people of every kind of race.
Like the people, the neighborhoods are extremely close together and even mixed. You have Chinatown, Little Italy, Little Ethiopia, Thai Town, Koreatown, and many other unofficial sites.
What bothers me and fascinates me at the same time is the fact that you can drive completely straight without any turns and experience Chinatown, Little Italy, the Mexican barrios, Koreatown, West Los Angeles, and Santa Monica, all on Pico Boulevard. That’s the fascinating part. The part where you can literally tell where you are by the appearance of the neighborhoods is where I am slightly peeved.
As you drive west and reach the beach, the houses and streets get nicer and the land is more elevated. It’s the physical and literal form of rags to riches.
9:15 a.m. – Massive skyscrapers aren’t as popular in West Los Angeles as they are in downtown. The building where I worked, which is on the edge of Los Angeles and a couple of blocks away from Beverly Hills, has only 10 floors. There was a lot of commotion in the office on the day Cambio.com came to film us, and our preparation for the Teen Choice Awards’ after-party on Sunday only heightened the frenzy.
12:30 p.m. – Strolling on Wilshire Boulevard and having lunch is the best way to get to know the district and its people. Many business associates come out of the caves that are 15-story buildings to enjoy a Quizno’s sub on one end or sushi and Korean BBQ on the other. If it isn’t a skyscraper, it is most likely to be something that has to do with food.
5:31 p.m. – The bus back to the Wilshire and Western Station is even more packed than the one in the morning. Not much happens on these buses because people are usually incredibly tired from the day’s work.
Los Angeles has its fair share of kooks and the nicest strangers I’ve ever met.
The bus ride on Wilshire Boulevard also brings a peek into the Los Angeles art scene.
There’s the Art + Design Museum, the Los Angeles County Museum of the Arts, historical museums, an architecture museum, a boat museum, and vintage museums, all on one boulevard.
Los Angeles is defined by the people who live in it – and it’s just like any other place in the world.

Elaine Truong is a Junior Reporter for Youth Journalism International.