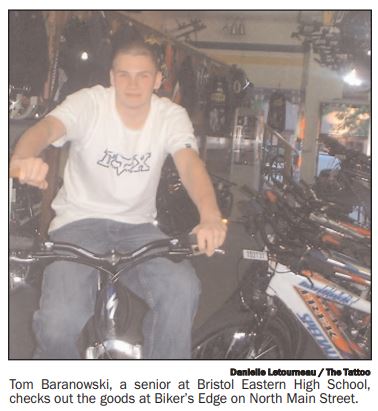 After almost three decades on North Main Street, the Biker’s Edge is on the move soon to a new location on Farmington Avenue.

Ed Bogun, the manager and salesperson at the popular bicycle shop, said that moving to the site of the old Redman Dairy is a good idea because there’s more traffic there – and that means more customers that can bring in more money.

“Gotta get your name out while people are driving past,” Bogun said.

The store started life as Kasey’s Sporting Goods back in 1972, but for the last 18 years it has been known as Biker’s Edge and kept its focus on bicycles and related equipment.

In recent years, the shop has been the buzz for all BMX and related needs. It’s a hit with young riders.

Selling bicycles for all sorts of riders, the shop has been growing so rapidly that it needs more space.

“We don’t have enough room, enough storage, we’ve tried to expand as much as possible,” Bogun said.

Boxed into an old downtown retail space, Biker’s Edge had to look elsewhere for a new site.

It found one a little west of the intersection of Jerome and Farmington avenues, where a crumbling dairy building stood until this year.

Construction has been proceeding rapidly and the bike shop may move as early as October.

Bogun said that “everybody’s thrilled” about the change in location and his customers say it’s “the best thing to do.”

The kids who shop there said the downtown scene isn’t going anywhere and Biker’s Edge decision to get out was a smart one.

The new property will have a bigger parking lot, which is more attractive to customers than trying to find a spot along North Main Street.

On Route 6, more people from Bristol and from out-of-town will have easy access to the shop.

Bogun said he is excited about the new building.

“There will be a greater selection of bikes, better displays and more recognition” in the community for the long-established business, he said.

So within a couple of months, bikers will have to pedal their cranks away from downtown and instead steer through all the traffic on Farmington Avenue.

But customers will gladly do it.