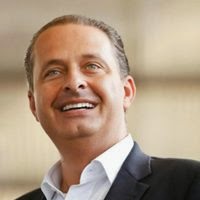 News reports indicated that the 49-year-old presidential candidate died along with several others from his campaign and the plane’s pilots on the way to campaign stops. The cause of the crash is under investigation.
Only 55 days away from the October 6 election, Campos was one of the main candidates vying for the presidency, along with President Dilma Rouseff and challenger Aécio Neves.
Rouseff declared three official days of mourning and she and the Neves temporarily stopped campaigning.
Campo’s death will probably not impact the election since he was just building his career as a president.
His running mate, Marina Silva, might replace him on the ticket, but the party still has 10 days to decide. She was last year’s presidential candidate, but only won about 20 percent of the vote.
Rousseff’s party, the Workers Party, has been running Brazil for eight years, and polls show that her in the lead for the upcoming election.
Campos, whose ideas for national improvements included plans for youth, education and health, seemed to have a promising political career ahead of him.
Maria Luiza Lago is a Reporter for Youth Journalism International.
***
Your tax-deductible contribution can help support this nonprofit at
www.HelpYJI.org