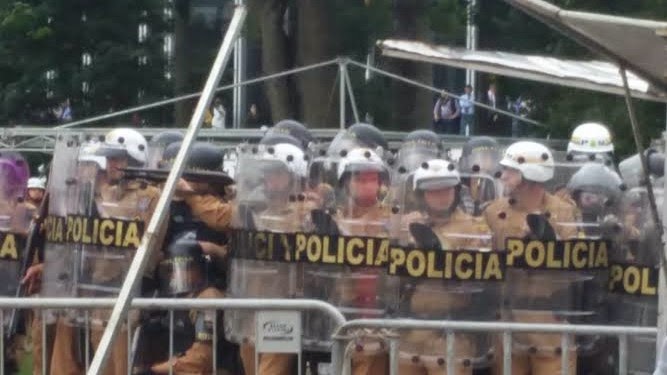 State police used water jets, rubber bullets, stun grenades and tear gas on teachers and other public servants who took to the streets of Curitiba to protest proposed reforms to the state pension program, said teachers who were there. Some of the protesters had been demonstrating since Monday, April 27.

The protest was peaceful until about 3 p.m. Wednesday, according to Marilia Kock, a teacher in Santo Antonio State School. 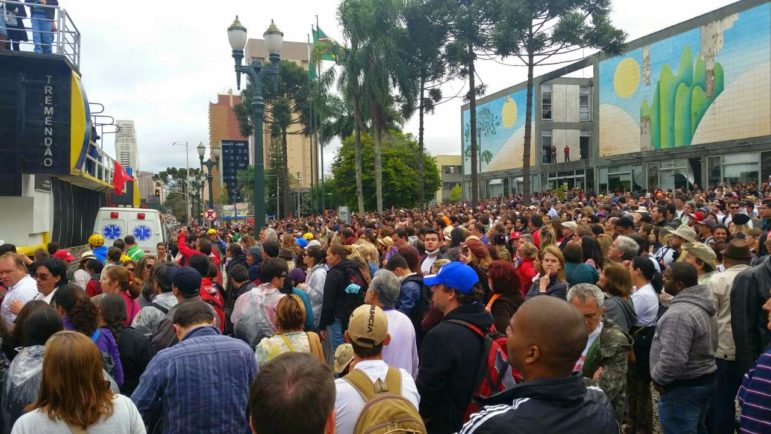 A crowd of protesters Wednesday in Curitiba. (Brayan Valêncio/YJI)

Kock said there were many people concentrated in front of the Assembly when prison guards broke down the fence and police started shooting.
“I saw the bombs and ran,” Kock said, clearly shaken. She said police were on the ground but also in helicopters overhead.
The city reported on its official Facebook page that 213 people were hurt and the other officials said 20 police officers were also injured.
Sebastião Santa Rosa, director of a union representing teachers in Curitiba and the surrounding region, was on the front line of demonstrators.
He said the police attacked the protesters and prevented them from coming close to those who were injured.

He was hit by a tear gas cannister, Santa Rosa said, while trying to help a person who had suffered a seizure from the effects of the tear gas.  While assisting the other person, he said, pieces of another cannister exploded near him and hit his hand. He said he needed seven stitches for the injury. 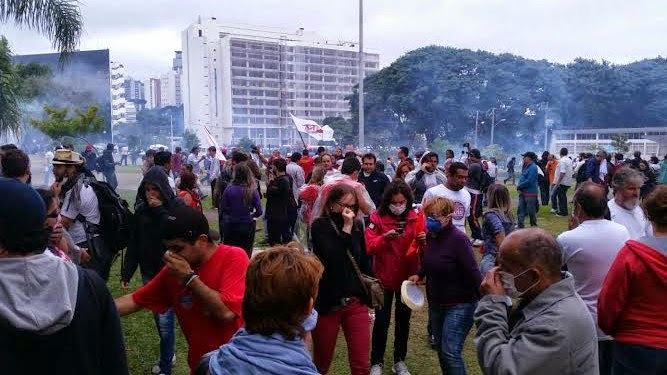 Teachers were not the only ones injured. Students who were out in support of their teachers and members of the press also were hurt. A police dog bit a cameraman from a local network, and journalists who were present had to contend with pepper spray in the air.
The city of Curitiba’s official Facebook page issued a statement calling the police blockade abusive and beyond what was necessary.
Curitiba Mayor Gustavo Fruet evacuated the town hall and sent employees home, leaving all the space to care for the wounded. The mayor also called the municipal police to help transport those who had been hurt, because the ambulances could not reach the site.
The city of Curitiba’s website noted that parents of about 150 children in a nearby kindergarten were called with urgent messages to pick up their frightened children, many of whom were feeling sick from the tear gas.
Even after all the violence, the voting continued and on Wednesday, lawmakers approved the changes, which shift half the burden of pension funding from the state to the employees.

Many organizations repudiated the acts of violence against teachers, including the Paraná Journalist’s Union, Union of Bank of Para and the Organization of Brazilians Lawyers. Across the state, there were expressions of support to teachers. 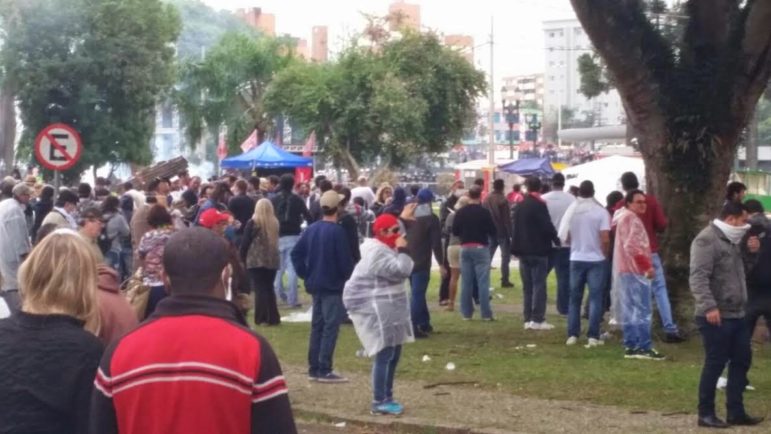 At the protest Wednesday in Curitiba. (Brayan Valêncio /YJI)

The Government of Paraná, however, issued a statement deploring the protest and said that “masked and armed people with stones, fireworks, sticks and iron rods used against the police, are responsible for direct confrontation.”

But two police officers who work for the state but spoke on condition their names not be used, said they did not want to take part in the supression of protesters but that they had to follow orders or face penalties for insubordination.