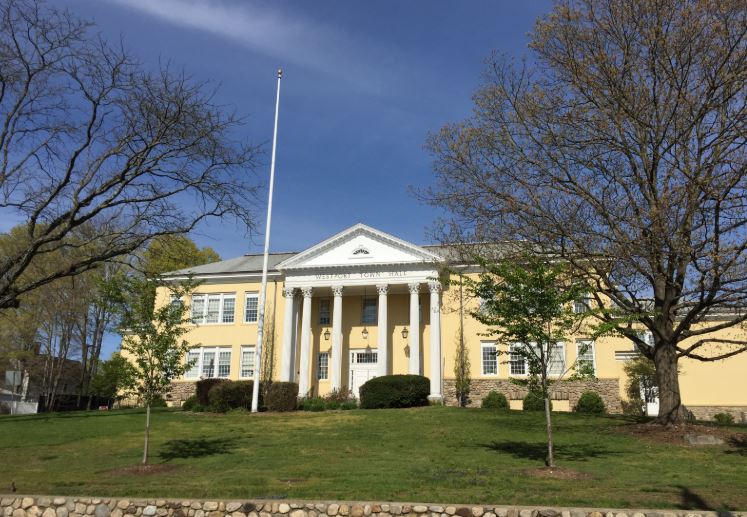 Westport's town hall, where the play will be held.

BRISTOL — Many a Hollywood starlet has been overheard saying that what she really wants to do is direct.

Christina Martin, a junior at Bristol Central High School, never pictured herself acting or directing. That was, of course, until she learned she was chosen from a pool of 57 students to stage her one-act play, “See Ya Later,” this Saturday evening at the 15th Annual Young Playwrights Festival of Connecticut.

Last March, while working with Central English teacher Gale Dickau in an independent study creative writing course, Martin learned about the writing contest that the festival in Westport holds each year.

Any high school student in the state could enter, so she decided to work on a play in class and submit it to the contest.

Martin said she was surprised when the organization notified her in April that she was one of the five 1999 young playwrights.

According to Dickau, Martin is the first winner from this part of Connecticut in the many years she has been following the contest.

She said many of the teenagers chosen are from the Westport area.

“I’ve only known of one other winner from around here,” Dickau said.

As one of the winners, Martin will receive a $50 cash prize and the right to direct her drama at the festival. She acts as the main character “Brett,” a “girl who sprains her ankle at a dance.”

Martin lured Central students Matt Brintle, Matt Boissonneault, Corey Kozuch, Chelsea O’Donnell, Anne Ouellette, Pat Galvin, and Kreg Kelley to play the parts of kids at the dance who stop by to talk to the lonely Brett, but never “stick around for long.”

Dickau describes that play, which takes place at a high school dance, as “very realistic” and “honest.”

Martin said she got the idea at a school sanctioned semi-formal dance where many of the students sat on the sidelines instead of dancing. She said it made her wonder what they were thinking.

The result was a scene that she describes as “loosely autobiographical” and “true to life.”

Martin intends to study creative writing in college. But, until now she hadn’t thought about dipping her pen for plays.

“I’ve always wanted to write, but I’ve never thought play writing would be part of it,” she said.

Those who would like to say they “knew her when” can catch Martin’s play at the Westport Town Hall at 8 p.m. Saturday Admission is free, and the evening will include the plays of the four other winners.

Amanda Lehmert is a Reporter for Youth Journalism International. This story appeared first in The Bristol (Conn.) Press.