TORONTO, Canada – Hayley Wickenheiser understands the importance of goals – and not just the kind she whacks pucks into.
If she weren’t one of the world’s best female hockey players, she’d be working toward another ambitious goal: Becoming a doctor. 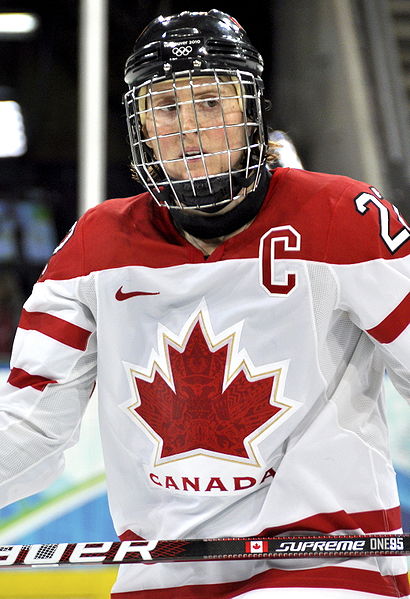 “If I wasn’t involved in hockey, I would be in medical school,” Wickenheiser said in a telephone interview after leading the Canadian women’s hockey team win Olympic gold this year.
Wickenheiser has made quite a name for herself in her chosen profession.
At the Vancouver 2010 Winter Olympics, Wickenheiser served as captain of the Canadian women’s hockey team.
“Being in Canada with all the other athletes made it a very unique experience,” she said.
The team’s gold medal win in Vancouver made Canadians very proud, and earned Wickenheiser her third Olympic gold medal.
As a woman in her profession, Wickenheiser said she faced challenges along the way to that latest medal.
“For sure, at times it’s been hard. People have double standards,” she said.
But Wickenheiser was able to overcome those challenges and become very successful in her sport. Many even consider her to be the best female hockey player of all time.
“I guess people might say that,” she said. “I think that time will tell.”
Wickenheiser said she was inspired to play hockey by the Edmonton Oilers of the 1980s, especially star players like Mark Napier and Wayne Gretzky. But her biggest inspirations are her parents, she said.
“My mom and dad gave me the early opportunities,” she said.
Wickenheiser, who is a mother with a 10-year-old son, has advice for aspiring athletes.
“It’s important to find something that you love to do,” she said. “You have to commit. Learn from the best athletes by watching them. Don’t be afraid to make mistakes, and practice makes perfect.”
Unlike many other athletes, Wickenheiser did not start training immediately after the Olympics.
“I am taking time off, enjoying everything,” she said.
Her next big competition is the 2011 International Ice Hockey Federation World Women’s Championship. She said she’ll start training soon, but is not sure which team she will be playing for.
As for other Olympics, she said she’s hoping to compete one more time.
“When the time comes, we’ll see,” she said.
One thing is certain. Just like most Canadians, Wickenheiser is passionate about hockey. That passion is something that could never be replaced – even by a medical degree.
“It’s what I love to do,” Wickenheiser said. “I felt the most comfortable on the ice my entire life.”

Mehran Shamit is a Junior Reporter for Youth Journalism International.