MELBOURNE – The fires currently raging across large parts of Victoria and New South Wales are on a scale never seen before. It is true that Australia gets bushfires every year, but the devastation from this summer’s fires is unprecedented.

Petra Kvitova, an athlete from the Czech Republic, takes to Twitter to promise support. (Alyce Collett/YJI)

The one good thing that is coming out of this disaster is the community spirit and the generosity of Australians, whether they’ve been impacted by the fires or not.

There have been celebrities from all different industries, Aussies and non-Aussies alike, who have or will donate huge sums of money.

Many Australian actors – some who are now primarily based in the United States – have donated huge sums of money to the relief effort.

One of the biggest fundraisers has come from Australian comedian Celeste Barber. She set up a Facebook fundraiser with the aim of raising $30,000. In the end, it raised more than $51 million.

It’s not just Aussie celebrities who have made large donations. Global music superstar Pink donated $500,000, which shows the impact that these fires are having on the rest of the world.

This means that it’s not just Aussies who are donating to the relief effort.

Tennis is a major part of the Australian summer, culminating in the Australian Open at the end of January. This means the world’s best tennis players are here, and their attention has been drawn to the disaster.

The whole thing started with Australian Nick Kygrios, currently ranked number 20 in the world. He vowed to donate $200 for every ace he served during the Australian Open. He ended up making the fourth round and serving 150 aces, so that’s a $30,000 donation to the fundraising effort.

Kygrios inspired many of his fellow tennis players to make similar donations. Karolina Pliskova and Petra Kvitova, who play for the Czech Republic; Australian player Ajla Tomljanovic, a native of Croatia and Simona Halep of Romania all made donations per aces pledges, but there are also some players who have done much more.

Germany’s Alexander Zverev made a pledge to donate $10,000 for every win he had at the Australian Open, and to donate every cent of his winnings if he won the entire tournament. 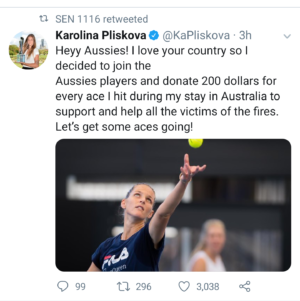 World number one Ash Barty of Australia also pledged to donate her entire winnings from the Brisbane International, which is a lead up tournament to the Australian Open. The donation could have been $360,000 if Barty had won, but she lost in the second round, so the donation was $32,000.

So despite all the devastation we have seen in the past few months, these donations have brought out the best in Australians and people from over the world.