MUMBAI, India — In a country that’s predominantly Hindu, and holds on steadfastly to its secular tag, Christmas holds different meaning for different people.

In rural India, December 25th is just another date on the calendar. 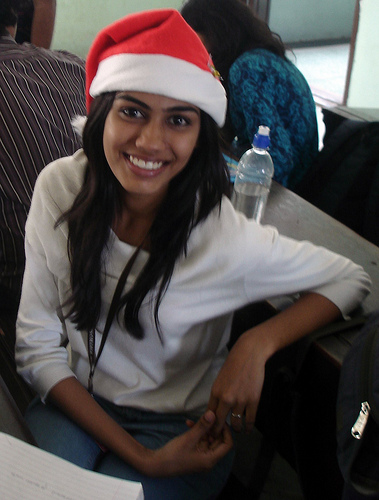 For some urban dwellers, though, it is just a reason to have a 10-day vacation – rolling Christmas and New Year’s into one generally termed ‘Christmas vacation.’

Some creative entrepreneurs even make a quick buck off the Christmas cheer by selling Santa hats and reindeer antlers that college students enthusiastically wear along with their normal attire.

Not only does it draw the disapproving eye of teachers – always a good reason to do anything, in their book – the students say gleefully, it makes them feel more ‘Christmassy.’

For some, Christmas is more than just a day to wake up late and watch TV all day, reveling in the joy of not having to go to school.

For them, Christmas is about happiness, celebration and bringing in the New Year with their loved ones.

Yash Gurjar, a 16-year-old born to a Catholic mother and a Hindu father (colloquially known as a ‘cocktail’) said his family celebrates Christmas with as much fervor as any Hindu festival.

From attending Midnight Mass on Christmas Eve to singing carols with the family and gorging on home-made marzipan, no stone is left unturned in the wholehearted celebration this festival of joy.

Gurjar said this tendency to celebrate Christmas and New Year as one long festival probably stems from the concept of the Indian Christmas vacation, where holidays begin a few days before Christmas and continue till the first Monday of the New Year.

Gurjar said that although he comes from a ‘cocktail’ family, the celebration of festivals is doubled rather than halved. His mixed culture, he said, enables him to take the best of both.

True to their vow of secularism, many non-Christian Indians allow their children to indulge in Christmas traditions, too.

By midnight on Christmas Eve, many stockings are hung at windows along with long letters to Santa, asking for gifts and assuring him that they were good that year.

As these children grow up and face the sad reality that there is no Santa, they remember the time they believed in him with nostalgia, as a sweet memory of childhood.

They in turn let their children believe in the miracles of Christmas, and the tradition continues.

Shagorika Ghosh is a Reporter for Youth Journalism International.