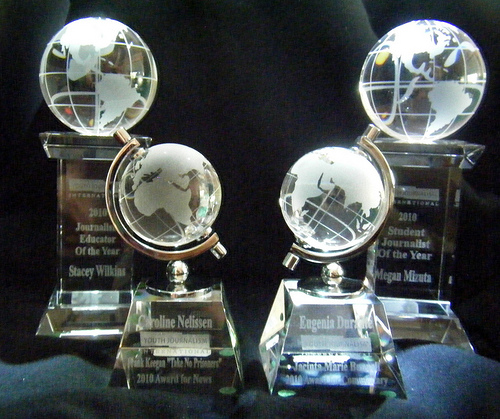 “Anyone
who thinks journalism is dead isn’t paying attention to the great work that
young reporters and writers are doing every day, all over the world,” said
Steve Collins, Youth Journalism International’s president.

Winners in major categories receive crystal trophies and other prize winners receive custom-made certificates.
There are a number of categories for entries, including Student Journalist of the Year, the Courage in Journalism award, Journalism Educator of the Year, The Jacinta Marie Bunnell Award for Commentary and The Frank Keegan “Take No Prisoners” Award for News.
“This year, we’re adding two new categories to give special attention to the wonderful multimedia work that young journalists are producing. Both multimedia news and features will have a chance now to stand out,” said Jackie Majerus, executive director at YJI.
Entries, which must be in English and published between Jan. 1, 2012 and Dec. 31, 2012, are due no later than 5 p.m. Eastern Standard Time on Friday, February 8, 2013. Awards will be handed out in May. Only work by non-professionals – those who are not paid — is allowed.
Details on how to enter the contest are available under the Contests link at the top of Youth Journalism International’s website at www.YouthJournalism.org.
In a bid to reduce paperwork and ease the administrative hassle, entries can be done entirely online by filling out a form on YJI’s website and submitting work via email.
A complete list of the winners from the past several years is also available on the website.
Youth Journalism International is a recognized 501(c)(3) public educational charity by the U.S. Internal Revenue Service. A non-governmental organization, YJI depends on donations from supporters to continue its important work training the next generation of journalists.
Its students’ work has been featured by The Huffington Post, The Mash in Chicago, National Geographic, PBS NewsHour Extra, The Tattoo teen newspaper, Radio Pacifica, Connecticut Public Radio and other news organizations.
For more information, contact Jackie Majerus, YJI’s executive director, or Steve Collins, YJI’s president, at (860) 523-9632 or yjicontest@gmail.com.