SINGAPORE — Politics has a way of rearing its ugly head at the most unnecessary times.
At the heart of a natural disaster, there lies not only natural destruction to lives, homes and livelihoods, but also man-made devastation by those who fear more for their political hold over the country they rule.
Just when food, water and medical supplies are especially wanting, the victims of Cyclone Nargis find themselves being denied these urgent necessities by their very own government.
The military government had appealed to the international community for aid since Cyclone Nargis struck on May 3, but it has done little to relieve the suffering of its people. Its efforts have been at most forced and lethargic. 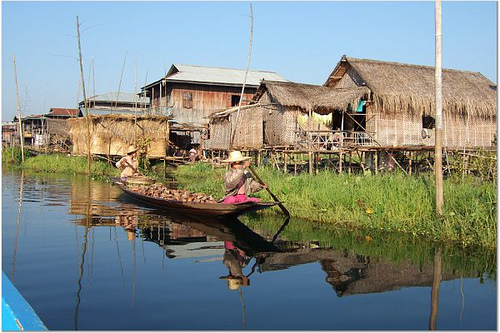 Heho, a village on stilts in Myanmar, before the cyclone hit. (Geraldine Soon/YJI)

Myanmar’s military junta, one of the world’s most isolationist governments, proved this point when it rejected the United States’ offer of aid and up till now, continues to stick stubbornly to its stand.
Almost a week after Cyclone Nargis struck, it has finally allowed some relief supplies from the United Nations to flow into Myanmar. However, I cannot see how such an act should be applauded. The act was long overdue.
In the first week after the storm, visas by United Nations teams and many more foreign aid groups had yet to be approved by the government.
When will Myanmar’s military government decide to take more responsibility for the plight of its citizens?
When will it decide to put aside its paranoid fear of foreign influence?
When will it realize that their very act of restricting aid to its people will soon become the breeding ground for resentment and hostility towards it?
Even where international aid has been forthcoming, the government itself has hardly provided similar aid to its people. If a government is not even willing to put the welfare of the citizens above its own interests in such a state of emergency, then I find no justifiable ground on which it can claim its legitimacy.
When I first visited Myanmar at the beginning of 2007, I would never have guessed that the hospitable and gracious society I knew it to be would be in its state of helplessness that it is in now.
Impoverishment, suppression and a lack of concern from their leaders – the people were like the baby in the cradle on the tree top in the lullaby. When the wind blows – one can only imagine what will happen.
Maybe, just maybe, a kind stranger would walk by and catch the baby. But of course, that stranger can’t stay for long. That stranger can’t bring that baby up. He can only cushion its fall and walk on by. The baby will have no choice but to fend for itself.
But I believe that baby is growing up fast.
With the protests which took place just last year and current ill sentiment towards the government for failing to effectively warn them and protect them from Cyclone Nargis, one can hope that the upcoming referendum on the military-backed constitution would show us the results that everyone wishes to see.
In the meantime, I hope that my tour guide, the boy I met, all those whom I walked past along the streets without a glance – I hope that wherever they are, they are safe.