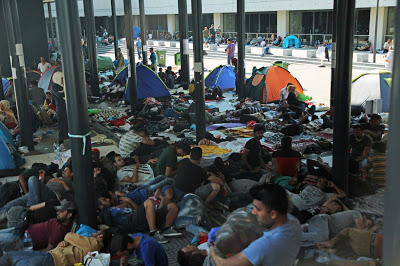 Refugees camped out in the Keleti train station in Budapest on Tuesday. (Megan Elizabeth Barlow/YJI) 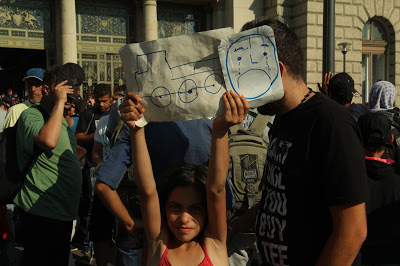 A little girl outside Keleti station holds hand-drawn signs with a train and a sad face. (Megan Elizabeth Barlow/YJI) 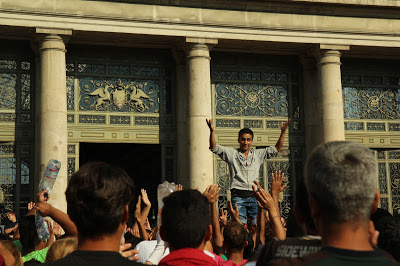 A man addresses a crowd of protesters outside the Keleti train station in Budapest on Tuesday. (Megan Elizabeth Barlow/YJI) 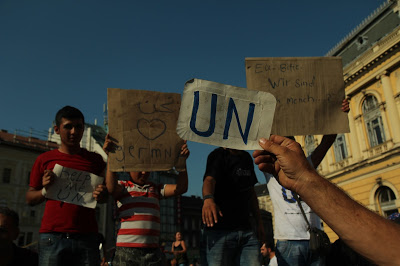 Protesters outside the Keleti train station hold signs asking for help from the United Nations and professing love for Germany. (Megan Elizabeth Barlow/YJI) 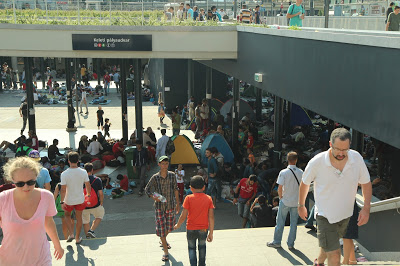 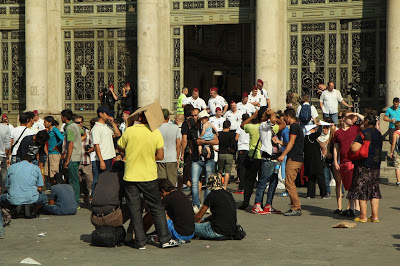 Protesters, many of them refugees seeking asylum, gathered outside the Keleti train station in Budapest on Tuesday. (Megan Elizabeth Barlow/YJI)
BUDAPEST, Hungary – Alarmingly high numbers of people have crossed the Mediterranean Sea this year, fleeing war and suffering in their home countries at home in the
Middle East and Africa and hoping to find safety in Europe.

This week saw, in a single day, more than 2,000 asylum seekers enter Hungary – despite its fenced border.

Hungarian officials closed the Keleti train station in Budapest on Tuesday, Sept. 1, preventing refugees, some who already had tickets, from traveling on to other countries like Austria or Germany.
For days, thousands of people, many from Syria, Afghanistan and Pakistan, have camped outside the station.
The train station re-opened Thursday, Sept. 3, but connections between Budapest and other European cities remain suspended. Many refugees are still at the station.
News reports here quoted Hungarian Prime Minister Viktor Orbán saying immigrants must have a valid passport and visa to travel within the Shengen area, which is a 26-nation area with a single border. Under an agreement between nations, travelers are not required to show passports when crossing from one to another.

On Tuesday, women and children at the Keleti station were primarily resting and sleeping, protecting themselves from the sun.  Many men were protesting in front of the police who were blocking the entrance of the station, shouting and calling out.“UN! UN!” the men yelled. “Germany! Merkel! Syria!”

Others shouted in Arabic that they wanted to reach Germany and many signs and banners they held said, “We love Germany,” and “UN.”
According to the International Organization for Migration, more than 350,000 people have risked their lives attempting to cross the Mediterranean this year, and 2,600
have died. Other asylum seekers perished elsewhere, including more than 70 adults and children who recently suffocated in the back of a tractor-trailer truck in Austria.
After mass numbers of refugees drowned off the Libyan coast this spring, and the discovery by Austrian police of the deaths in the truck brought some notable media attention, some European Union leaders, including German Chancellor Angela Merkel, are working toward a new common migration policy.
Whether European Union leaders undertake the necessary actions to resolve this humanitarian crisis, or whether their words simply blow in the wind until a new tragedy occurs remains to be seen.
Megan Elizabeth Barlow is a Junior Reporter for Youth Journalism International.