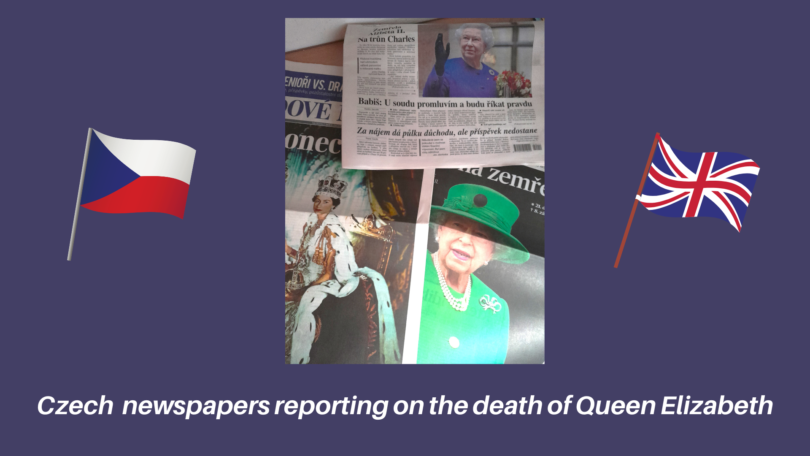 Hořovice, CZECH REPUBLIC – The Czech Republic has a bad experience with monarchy. For more than 800 years, Bohemia, the old name for Czechia, was part of the Austria-Hungary empire. The dynasty there used to tyrannize people until the First World War.

That’s why people were so grateful and happy when our country’s first president, Tomas Garigue Masaryk, helped form the first independent republic on the old Bohemian territory.

Annual polls show that almost nobody in the Czech Republic wants the monarchy back.

But despite this, the British royal family has been very popular here. Her Majesty The Queen was always considered as a great monarch with good spirit and commitment.

So the Czech people share the sadness over her death yesterday with the whole royal family and the British people.

Queen Elizabeth visited Czechia only once, according to her tradition. It was March 1996, seven years after the revolution in Czechoslovakia when communism was defeated.

In 1991, Czechoslovakia became two independent countries, the Czech Republic and Slovakia. The president of the former one, Vaclav Havel, a famous dissident, welcomed the queen in Prague. It meant a lot to Czech citizens – another sign that the communism era was over.

In 2017, Czech President Miloš Zeman visited Her Majesty in Buckingham Palace. It was significantly less celebrated in the Czech Republic because the president was not so popular and he made some ethical mistakes.

Queen Elizabeth’s death is the dominant news in all of Czech media.

“I am deeply saddened by the death of Her Majesty the Queen, Elizabeth II. Sending heartfelt and sincere condolences to the Royal Family and the british people and the people of the Commonwealth,” wrote Czech Prime Minister Petr Fiala on Twitter last night when the news became public.

Many other Czech polititians, celebrities and ordinary people did the same.

The mourning of the whole world shows how not only Queen Elizabeth’s fame and popularity, but how admired the British royal family is, as a whole.

All eyes are now on the new monarch, King Charles III and the favorite young family of Prince William, Duke of Cambridge.

But the legacy of Her Majesty the Queen will always be with us.

Renata Pernegrová is a Junior Reporter with Youth Journalism International.