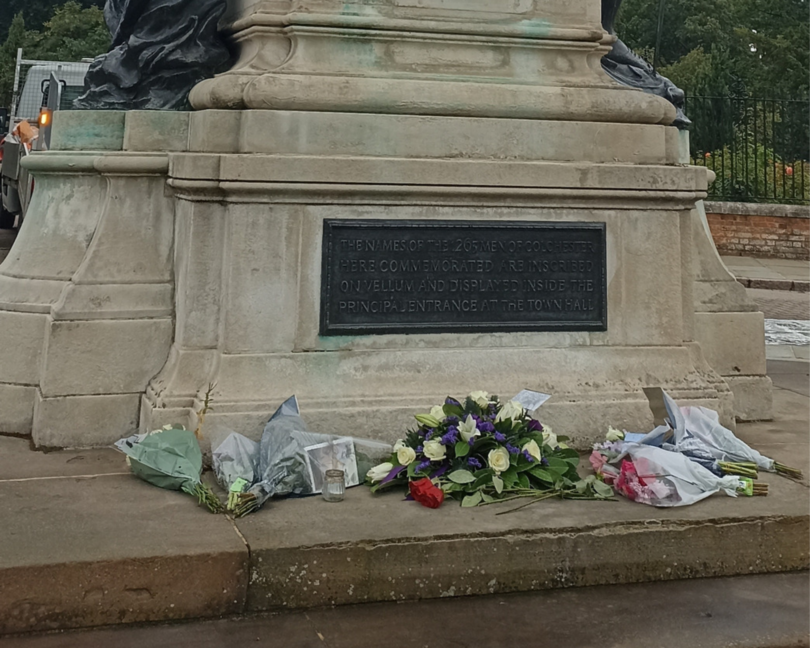 Colchester, Essex, UK – Queen Elizabeth’s influence stretched over the vast corners of the world during her reign, in the same way a widespread outpouring of grief now stretches across her home nation.

Mourning for the queen, who died September 8 in Scotland, is happening here in Colchester, east of London. Previously a town, Colchester was recently given the status of city due to the Queen’s Platinum jubilee in June 2022.

A book of condolences is in the town hall for anyone wishing to pay tribute to the queen and flowers are being laid by the town’s War Memorial.

It is not merely the older generation who feels the loss of the woman who had so much prominence in British life since her coronation seven decades ago, but the younger generation who have never known another monarch.

Her Majesty’s approval rating during her reign never dropped below 60%, proving the way she has captured the hearts of the nation through her life-long dedication to public service.

On her 21st birthday in 1947, then-Princess Elizabeth addressed the Commonwealth in a speech.

“I declare before you all that my whole life, whether it be long or short, shall be devoted to your service,” she said.

She has certainly fulfilled and exceeded her pledge of duty.

She always mirrored her busy nation, never resting. She took four days off for the death of her beloved husband, Prince Phillip, the Duke of Edinburgh last year before immediately returning to attend engagements.

Merely three days before her death, she appointed Prime Minister Liz Truss, her 15th prime minister. Other politicians and world leaders have sent words of remembrance such as U.S. President Joe Biden and Canadian Prime Minister Justin Trudeau, who said, “She was one of my favorite people in the world.”

Queen Elizabeth was also head of state in Canada.

Her grace, charm and selfless servitude will certainly always make her revered as a monarch who acted out of benevolence and charity.

The queen’s wisdom and company has guided us all through times where little light could be found in the dark, such as after the Manchester Arena terrorist attack in 2017 where she made hospital visits to injured victims.

A 10-day period of mourning follows her death. The queen’s body will rest in state so the public can walk by the coffin and pay their respects.

Queen Elizabeth’s death marks the end of an era defined by technological advances and political tension.

Elise Ando is a Junior Reporter with Youth Journalism International.

Elise Ando is a Junior Reporter with Youth Journalism International from Colchester, UK.