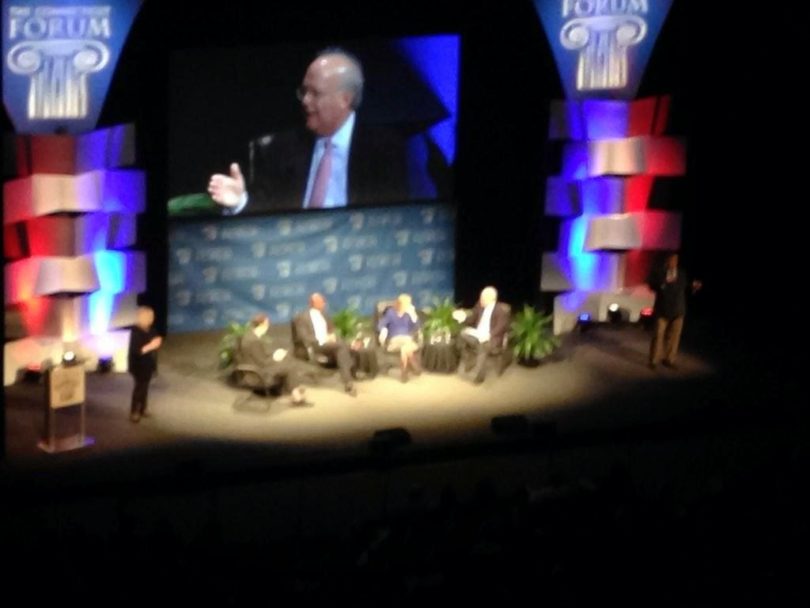 Speakers at The Connecticut Forum earlier this month. Karl Rove, who is speaking, is shown on the large screen. (Max Turgeon/YJI)

HARTFORD, Connecticut, U.S.A. – Presenting panelists of different political views, The Connecticut Forum recently provided an interesting exchange of ideas about what ails America’s political system and how to fix it.

It was a brilliant evening, with many theories and ideas thrown around by these experts. Almost all topics were covered.

WNPR radio host John Dankosky, did an excellent job as moderator, treating everyone fairly and keeping things moving. He asked tough, yet fair questions.
Though all three panelists agreed that the political system was broken, Rove also said the system mostly works. If people think it is broken, Rove said, they should get involved.
I found those to be wise words from Rove, the person on the panel I was most familiar with.
Rove said getting dirty money out of politics will solve a lot of problems. He went on to explain how we need more transparency in campaign donations.
Goodwin, who was in between the conservative Rove, and Blow, a liberal, played her role in the middle very well. Goodwin said most of the problems in our government are caused by
miscommunications, mainly between Democrats and Republicans. 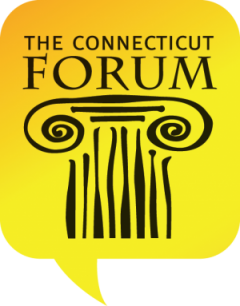 She said the system is broken because there is a lack of communication in government by the two major parties.
That could not be more true.
Blow has a very liberal approach to fixing the system, yet he had more than his fair share of good ideas.
Blow said Republicans have caused many issues by instituting voter ID laws, which, as you might guess, upset Rove.
Goodwin said she agreed with Rove, but that we should still be aware of minority voting rights.
I think voter ID laws have helped fight voter fraud, but we need to be careful they don’t discourage citizens from voting.
Rove brought up a good point in asking why citizens don’t have federal IDs. We have state-issued drivers’ licenses, but no standard federal ID, like many other countries.
Goodwin talked about how we have to get our youth involved, a subject I am very sensitive to as a 15-year-old.
She said she hoped that the youth in the audience could lead the effort to get big money out of politics.
Blow talked about how society discourages youth from getting involved. He says kids look at school with unhappiness, a sentiment I can confirm.
Blow said it isn’t that young people don’t care, just that they don’t believe the adults.
Rove commented on how the Common Core educational standards are hurting our schools, something I agree with.
The line of the night though, was when Blow said that people are more interested in ammunition than information.
Negative campaign ads are a prime example of Blow’s statement. Most of these ads lack facts, and are only personal attacks on their opponents, which just hurts our system. He added that
there is a lack of trust and respect between fellow politicians.
Blow said he thought the campaign season should be shortened, but the panel couldn’t come up with a solution that would do it.
I learned a lot from all three individuals as they each had something different to offer. Although Rove received his fair share of boos here in blue state Connecticut, they were all great sports.
As a country, we are better off for having tough discussions like these. It is the only way to improve our broken – yes broken – political system.
An important theme that echoed throughout the evening was that youth need to get involved and lead the charge toward making our government work better.
Teachers could make a difference here by encouraging students to get involved in the political system, not ignore it because of its flaws.
Young people are the future leaders of this country and the nation is better off if they are informed from an early age.

Americans want to see their country succeed. That’s something Democrats and Republicans can surely agree on.

Max Turgeon is a Junior Reporter for Youth Journalism International.