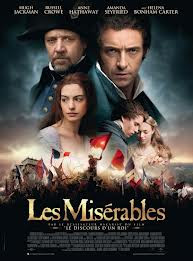 BRISBANE, Australia – It’s not a common occurrence for a film to feature more singing than dialogue. However, Director Tom Hooper’s musical, Les Misérables not only achieves this, but goes one step further by having no more than a dozen words uttered throughout the entire two and a half hour film.

Before seeing the movie, I had no idea what Les Misérables  was about or even that it was a novel and
extremely successful theater production.

I went into
the cinema with no idea that it was even a musical so you can imagine my
surprise when a rough and sagged Hugh Jackman started singing the second he
appeared, holding onto heavy ropes and covered in dirt! However, it soon dawned
on me that it wasn’t just an ordinary musical.

For those of
you who are unaware, Les Misérables is a film adaption of Victor
Hugo’s 1862  French historical novel as
well as Alain Boublil and Claude-Michel Schönberg’s musical, both of the same
name.
The film
tells the story of prisoner 24601, Jean Valjean who after being released from
prison, breaks his parole in order to create a new life for himself.
Throughout
the film, he constantly attempts to evade the persistent Inspector Javert who
wishes to take him back into custody. This proves even more difficult when he
agrees to care for factory worker Fantine’s daughter, Cosette.
Set during
post-revolutionary France, the story includes much of the June Rebellion as an
interesting background for all the history lovers.
The cast includes
many A-list celebrities such as Jackman, Russell Crowe, Anne Hathaway, Amanda
Seyfried, Helena Bonham Carter, Sacha Baron Cohen, as well fresh talent
Samantha Barks, Aaron Tveit and Eddie Redmayne.
Performances
by Jackman as Jean Valjean and Hathaway as Fantine were breathtaking, providing
a chemistry that had the audience hoping that their friendship would blossom
into romance.
I was
pleasantly surprised to see Carter and Cohen as the thieving couple, Thénardier and
Madam Thénardier, bringing laughter
to the otherwise dark film.
Furthermore,
the entire cast was extremely impressive when it came to vocals. Because they
were required to record their songs as they acted their scenes out, the vocals
ended up so emotionally charged that I was left feeling a mix between elation
and sadness.
At times,
though, I found it quite difficult to tell when one song ended and another
started. Although there’s no doubt that the actors should be commended for
their performances, unfortunately each new song seemed to be a carbon copy of
the previous one and without any dialogue to bring my focus back, I found
myself getting lost in my thoughts or fidgety in my chair.
But there
were a few songs that really captivated me.
During the
start of the battle, the rebels perform “Do You Hear the People Sing?” which
talks about their frustrations with the king and their refusal to remain
slaves. This was definitely one of my favorite songs. It was so beautifully
done that I felt ready to fight for my freedom as if I were one of the slaves.
Another winner
was “Empty Chairs at Empty Tables,” performed
by Cosette’s lover and rebel student, Marius, played by Redmayne. The song is
featured after the rebels lose the battle and he returns to find nothing but
bullet holes and broken furniture. Redmayne’s vocals are so haunting and rich
that I was literally crying like a baby by the end of the song.
Les Misérables definitely
gives off the vibe of a musical theater production on film and is not for the
faint hearted.
The
storyline is beautifully crafted and the all-star cast does a phenomenal job.
However, those who are not interested in musicals or musical theater will more
than likely find it difficult to sit through two and a half hours of almost nothing
but singing, even with the movie featuring an exceptional cast.
If you are
intrigued by the storyline but might not be able to handle the long period of
singing in a crowded cinema, then you should wait for its DVD release and watch
it at your own leisure.
For those of
you who adore musical theater, be prepared to spend your entire paycheck on
movie tickets because you’re definitely going to want to see this film more
than once.