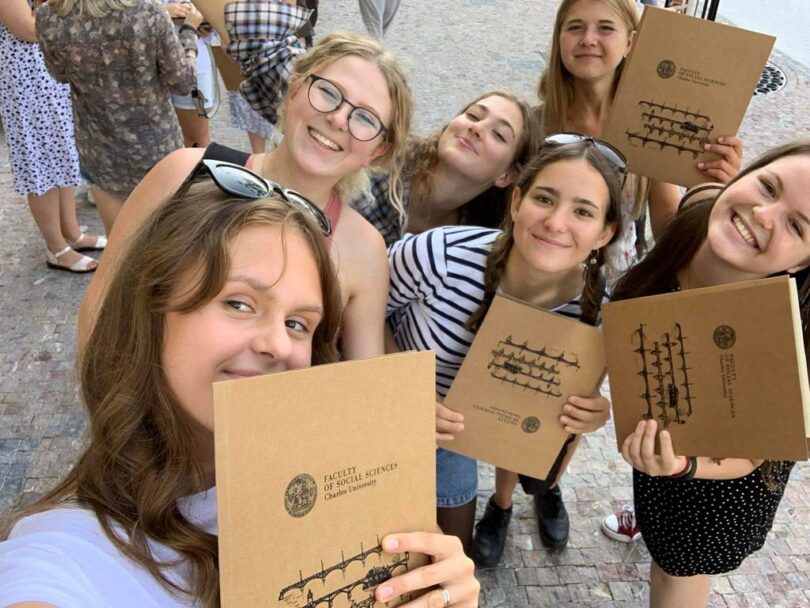 A group selfie of some of the students who attended the journalism school in Prague over the summer. Author Renata Pernegrová is in the far back, on the right. (Used with permission.)

PRAGUE – People in the Czech Republic don’t consider journalism as important as citizens of some other countries. Many Czechs think local media are under the influence of powerful or influential people in politics or business.

That is probably the inheritance of the communist rule that Czechs lived under for more than four decades.

But the social science faculty at Charles University is trying to change this. They organize one-week summer and winter journalism schools for potential students.

This is a really good opportunity for everybody who wants to become a journalism student.

Established in the 14th century by King Charles IV, a famous Czech king, Charles University in Prague is the most prestigious university in the country. The professors teaching here are some of the best experts in their field, so it was a pleasure to meet at least some of them.

It is sad that not too many ambitious young people interested in journalism do not know about this. It is not just for Czechs – everyone is happy to speak in English and get to know student journalists from other countries.

I had the opportunity to attend the 2022 summer session as one of nine student journalists, all of us about age 17. Five of us were Czech and four came from Ukraine, so at least some people from outside the country had heard of it.

Some of were able to practice our Russian language skills with the Ukrainians, who learned about the program from their journalism teacher at Uzhhorod University, which is on the border of Ukraine and Slovakia.

They made a 12-hour journey from Ukraine to the Czech Republic and after a week in Prague, they returned home. They said it would be a very long drive by bus because it of having to avoid the areas impacted by war.

We attended the journalism school from Monday to Friday, each day packed with many great activities.

Students tried writing a piece of developing news, attended the Seznam headquarters – that’s a big Czech media company – and had the chance to sit in a big TV studio in front of four cameras.

We had many seminars and workshops in the morning and a learning program in the afternoon.

Sometimes we faced challenging tasks. We had to do an interview with random tourists at the biggest square in Prague and shoot a report from it. We heard advice from a speech expert about the importance of the voice when doing broadcasting or news-reading.

On our last day, we got diplomas as a confirmation of our participation in the project.

Because the summer school was successful, there will be a winter school with a similarly filled program.

The course welcomes every young and ambitious student interested in journalism, so check them out for more information and apply. You won´t regret it!

Renata Pernegrová is a Reporter with Youth Journalism International.