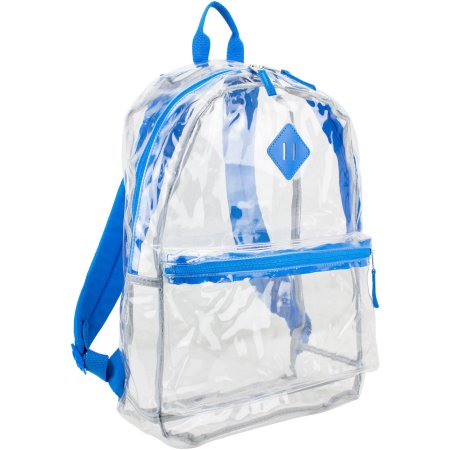 BRISTOL, Connecticut, U.S.A. — The “Lancer Lockdown” at Bristol Eastern High School is only the first step for officials looking to improve student safety — they are also seriously considering an order that backpacks be see-through.

V. Everett Lyons, principal of Bristol Eastern, said he has been keeping his ears and eyes open to procedures other schools were using.

“There are several backpack-making companies who might make them,” said Lyons.

According to Lyons, the use of non-transparent backpacks is a hole in current safety procedures.

“It’s a potential weakness, you can’t look inside each and every one, and it’s a convenient place to put things you shouldn’t have in school,” said Lyons.

Assistant Principal Daniel Veins said he has already explored the Internet to see if backpack companies such as L.L. Bean and Eastpack sell clear or translucent models.

Veins said, “I think you’re going to see companies turning them out soon.”

Many students as Eastern are outraged at the possibility of being forced to use see-through backpacks.

Sophomore Lisa Caissie said, “It’s an invasion of privacy, you may have personal things that you don’t want other people to see.”

Lyons claimed that privacy would still be respected and he didn’t think it was a “big issue.”

“You need to draw a line between being safe and being intrusive,” said Lyons. “As principal I don’t want to create an environment where students feel they’re going to prison every day. But I think we need to take some prudent steps.”

Han Hang, a sophomore, said, “I don’t think that the school should be able to do that to students, it won’t be effective because if somebody wants to bring a gun into school, they’ll find a way.”

“Clear bookbags are unnecessary,” said sophomore Kelly Osborne. “There’s a line between safety and privacy. I think metal detectors are a safer idea because kids can just put guns in their pockets.”

Freshman Sara Lupa was unsure as to the quality of the proposed backpacks.

Sophomore Melissa Garcia agreed, “I take a full-course load, that means four books a day, and a little plastic bag isn’t going to do it.”

However, Garcia said that she is against metal detectors.

“They make me feel so insecure, I mean, what is this? A prison?”

“I would prefer metal detectors over clear backpacks,” said Mark Cyr, a sophomore, “but I think it might be a necessary precaution to take.”

Sophomore George Poulin said, “Backpacks are a symbol of a person’s individuality, giving each person the same backpack would destroy that.”

Child development instructor Creighton Paquette said of the proposed clear backpacks, “I think it would be a wise safety precaution.”

“I think it’s inconvenient and stupid,” said junior Melissa Couture. “I don’t use my locker, I use my backpack, and all my books are in it.”

Couture said metal detectors would not be a resolution because “they would give the impression that the school isn’t safe and students wouldn’t want to go here.”

Band director Richard Theriault said, “There’s a fine line between how much you can do to prevent something and getting carried away. I guess it’s okay as long as it creates a safe environment.”

Brandon Glasgow, a junior, said, “I’ve had my bookbag for the last five years, and it cost me a lot of money, why should I throw it away?”

He added, “I would rather wear a nasty plaid uniform to school!”

Mary-Jean Faulkner, a science teacher, said, “I figure it can’t hurt, what difference does it make if they carry their stuff in a net-type thing or canvas?”

Faulkner added, “The chances of it happening here are slim to none, but safety must always be a major concern. If students had to go by metal detectors, they couldn’t sneak anything in anyway.”

“It’s a logical thing to do, but it infringes on privacy,” said Brandi. “If I had a choice I would take the metal detectors over clear backpacks any day. The heck with image, the name of the game is safety.”

Choral director Ken Ferris said of the clear backpacks, “I think it is a wonderful idea. Some of these bags are so huge you could carry drugs, guns, even propane tanks — anything other than books — that may be detrimental to students.”

Guidance Counselor Larry Hochman said what needs to be done at Eastern hasn’t changed since the Colorado tragedy.

“It’s like if you almost have a car accident, you try to be more careful and reassess the job you’re doing.”

Ferris predicted, “Everyone is going to fight the clear bookbags until someone gets hurt. Isn’t it better to be safe than sorry?”
Chantelle Garzone is a Reporter for Youth Journalism International.