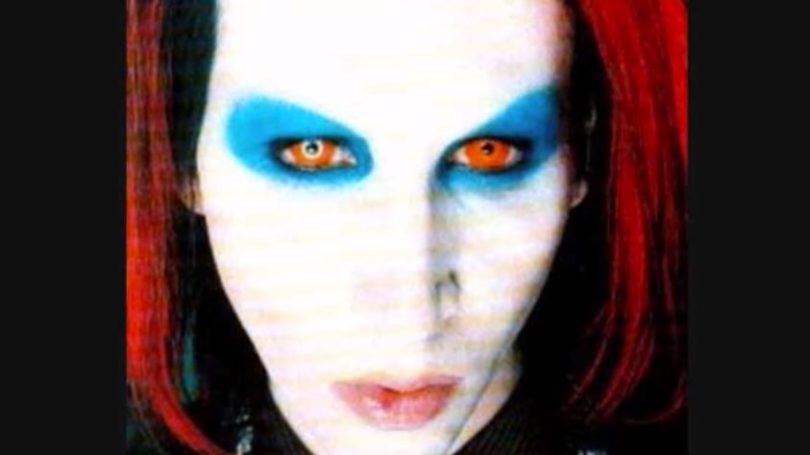 And, of course, there was Marilyn Manson.

I was in the audience of the band’s recent New Haven concert for a reason different than that of the masses. I wanted to see what the big deal was. I’ve wondered if they were really worth all of the attention and parental nightmares.

I would have to say that this was no ordinary concert. In fact I don’t think it was about the music at all. It was an all-out performance. And the star of the show was obviously Manson himself.

He had more costume changes than I could keep track of. Manson’s get-ups included a cop outfit, a silver pair of pants and shirt over a black thong, and a top with spikes sticking out about two feet from his shoulders.

But the most memorable were massive metal stilts on his legs and long poles attached to his arms to match. He wandered around the stage resembling some sort of insect.

There were almost as many props as there were costumes. They had everything their reputation implied, from a flaming cross to a stage-sized sign made of light bulbs stating only the word “DRUGS.”

They also delivered their well-known massive flags bearing satanic symbols and a podium where Manson could speak.

And what concert would be complete without the band’s followers. Everywhere you looked were the so-called “Mansonites,” with their band t-shirts, hair dye, vinyl clothes, fishnets and make-up.

Beyond the aesthetics of the evening was the way Manson conducted himself.

Everything I had heard about happened. He did act crudely and swear profusely. He pulled down his pants and exposed his thong. He humped the stage and his guitarist. And he wiped himself with a t-shirt a fan had thrown.

In addition to all that, the things he said were meant to get a rise out of the fans and offend the world.

He talked about dreams of a world full of drugs, and how God wished that his name be spelled D-R-U-G-S instead of G-O-D.

In an attempt to humiliate the security guards and police present, he swore at them, insulted them, and yelled “I’m talking to you!,” followed by obscenities when he was ignored.

When one policeman shook hands with him, he told the audience he had just masturbated into that hand.

I anticipated all of this. I wasn’t disturbed, or even surprised, because it is all part of the image surrounding Manson. These things are the stereotypical part of the show. And I was well aware they would happen before going.

The thing that I wasn’t aware of was the way the fans acted. They seemed as though they really believed that Manson cared about them. They cheered and screamed “I love you” throughout every song.

They sang, “I don’t got the drugs but the drugs got me,” and pointed to themselves.

The crowd chanted with him, saying, “We hate love. We love hate.”

They even screamed and threw up their arms in unison under his command. It looked like they were worshiping Hitler.

To me, this was the disturbing part. This was the point where I sympathized with all of the people against Manson.

It was the fact that they looked and acted like they’d do anything for him that made me wonder how deep-rooted it really was.

I figure that a lot of these kids were looking for someone to follow. They needed a leader and he stepped up. But it doesn’t make it any easier to stomach.

This isn’t the same as other bands and their fans. They don’t just like the music. They transform a huge chunk of their identity into being a follower. And, to blindly make a statement like “we love hate” is pretty scary.

To bring the evening to a close, Manson lit the drum set on fire. He didn’t bother to wait until the drummer had gotten up, or even stopped playing.

My Marilyn Manson concert experience has shown me that parents should be outraged.

But I’m not sure they are outraged for the right reasons. They should be shocked by their children’s  behavior, not by Manson’s.

There are always going to be people who push the boundaries of freedom of speech. And that is how it should be. We all ought to be challenging our supposed rights. Otherwise we can never be sure that we are as free as we think we are.

Thus, the problem does not lie in Marilyn Manson screaming about sex, drugs and Satan. The problem is the children cheering along.

Just think about that.