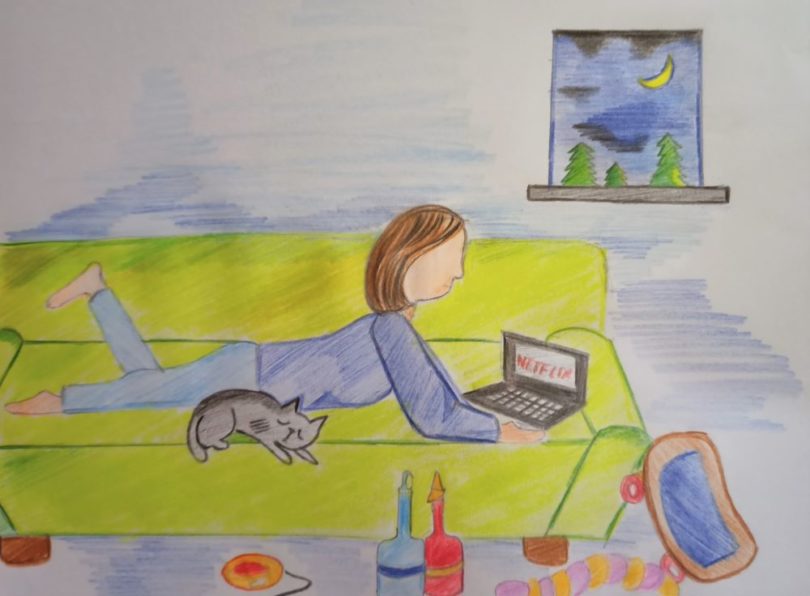 Young people around the world said the coronavirus has impacted their physical health, especially during periods of quarantine or lockdown.

Others adopted new, healthy habits that made a positive difference in their health.

“I gained weight, which is really awesome,” said Nicolle DeGroft, a 17-year-old in Suffolk, Virginia, who added almost 7 kilograms. “During school, I was underweight. In the last 45 days, I’ve put on 15 pounds.”

Sanya Zardkanlu, 21, of Bojnurd, Iran, said with restaurants and cafes closed due to the pandemic, she’s been eating more healthy and homemade foods, which is a beneficial change.

But some are struggling to get enough healthy food.

In Bexley, a borough of London, 17-year-old Aaron Foster said he’s lost weight because he’s not eating properly – something he blamed on a messed-up sleep schedule.

Lucas Arata, 18, from Luxembourg, said that he used to walk 10 to 15 miles a day before the pandemic. He’s down to about a mile a day, he said, and he doesn’t feel as good.

According to some teens, stress and changes in routine have led to an increase in junk food intake.

Sylva Das, an 11th grader living in Ann Arbor, Michigan said she “binged” on a lot of junk food at the beginning of the pandemic but is now trying to eat healthier.

“I definitely gained weight, an unreasonable amount of weight too,” said Karolyn Morris, a 10th grade student in Suffolk, Virginia. “I don’t think it’s just because of eating. It’s a problem, but I think because no one has responsibilities everyone feels like they don’t have to do things or move around. I don’t remember the last time I’ve actually done things. I definitely gained an unreasonable amount of weight and I know others have as well.”

Both Zineb El Janati, a teen from Fez, Morocco and Muhammad Tariq, 22, a university student in Nicosia, Cyprus, said the pandemic made them feel lazy.

El Janati said she gained weight, and Tariq, a former gym rat who hadn’t exercised in a while, said he found himself caring less about his physical health.

Li Zing, 14, of Beijing, said she also feels tired, lazy and lethargic, unwilling to even do everyday things like walk down the stairs.

In Quito, Ecuador, 17-year-old Juan Riofrio said he used to do a lot of sports before the pandemic. Now he said he has less energy and spends a lot of time sitting.

But the changes in routine caused by the pandemic free up time to exercise as well.

“When there is so little to do I force myself to go outside,” said Aliyah Kassam, a 17-year-old from London. She has been doing yoga and going on more frequent walks and runs in lockdown.

Chloe Connell, a 15-year-old from Melbourne, Australia also saw a positive impact on her physical health due to the pandemic.

“This quarantine has actually positively affected my physical health, as it has driven me to work out from home, which otherwise I would not have found motivation to do,” Connell said.

Being confined at home spurred Aliyah Kassam, 17, of Stanmore, a section of London, to go out for more walks, runs and to do more yoga.

“When there is so little to do I force myself to go outside and as a result I have done a lot more exercise,” Kassam said.

Binnet Roberts, 22, who is a student at the University of The Gambia, also said she’s been doing some exercises during the pandemic, so the impact on her physical health has been positive.

But without access to gyms and instructors, many said, physical activity is limited.

“I assure you that it had a negative effect on athletes’ bodies,” said Maryam Azimpour, an athlete and 12th grade student living in Tehran, Iran. “Even if they say that they have been exercising for an hour every day at home, it still doesn’t have the same effect of going to the gym. You have to be Cristiano Ronaldo to face the quarantine as an athlete, because he has his own instructors.”

Verdant Burak Şanel, a 17-year-old living in Istanbul, has also been completely unable to exercise. Before the pandemic, he did judo three times per week, but now he has found his weight and physical activity impacted.

In the Philippines, Jonas Roi B. Amparo, 18 of Tagbilaran City, said he also gained weight. He used to jog every day, he said, but with the quarantine, had to stop.

Iran’s closed gyms also stopped Zardkanlu from exercising, she said, since she doesn’t workout at home.

“Because it first affected my mental health, I wasn’t doing anything productive because I had no motivation, so I wasn’t exercising, and then footy [Australian Rules football] also got canceled so I wasn’t doing that anymore,” said Palmer.

Reem Fayed, a 16-year-old living in Mechanicsville, Virginia, has had less motivation to exercise due to social isolation. When the quarantine began, she had been walking every day, she said.