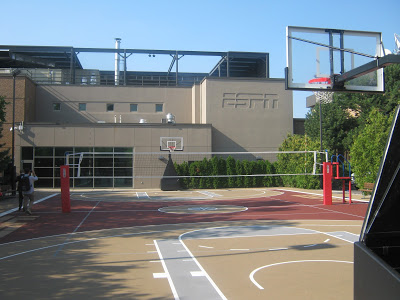 An outdoor basketball court is tucked into the interior of ESPN's sprawling campus. (Rae Martin/YJI)

BRISTOL, Connecticut, U.S.A. – In some social circles, the sport of football is synonymous with meatheads and students whose only claim to college acceptance is athletic skill.

For an untold portion of players that may be true, but the amount of thought and creativity shown swirling in the air at ESPN’s worldwide headquarters in Bristol is decidedly unlike anything of that stereotypical athlete.
Passion and creativity in sports without direction is useless to put into a model a company can use. This is where the CEO, or company president in this case, comes in to apply vision, motive, and leadership.
Filling that role currently at ESPN is John Skipper.

Don’t let his southern accent and charming ramble fool you. His words ooze sophistication and a self-assured business sense. 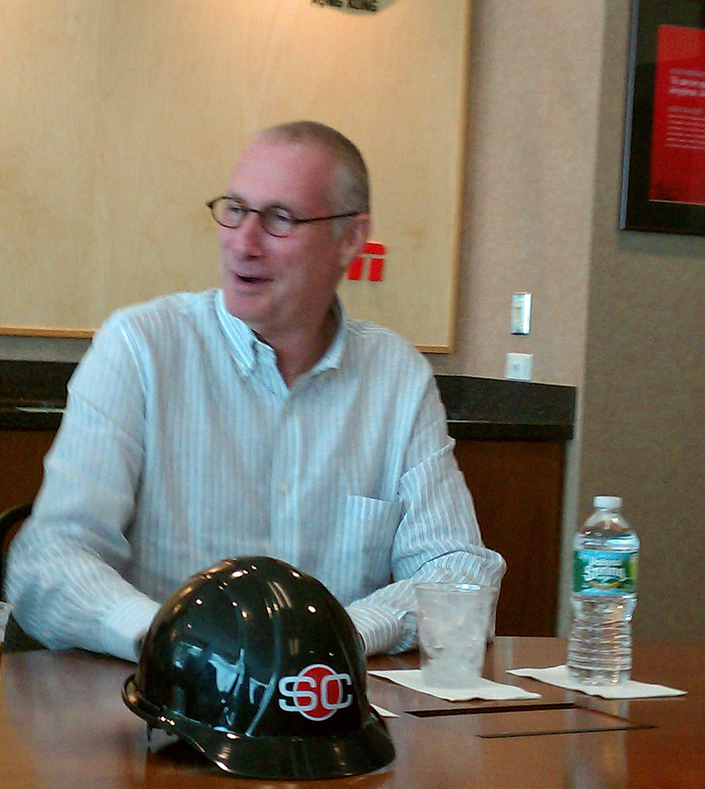 “We like competition,” said Skipper. “It makes us sharper.”
As sharp as the glasses he was wearing during the Q and A session? One may think not!
When asked about the apparent controversy surrounding former SportsCenter anchor Keith Olbermann’s return to the network after an acrimonious departure more than a decade ago, the president gave an interesting reply:
“What Jon Stewart does for news, Keith will do that for sports.”
The new show, which will air weeknights at 11p.m. starting Monday, Aug. 26, won’t be political, said Skipper, except when politics intersects with sports.
“It’ll be provocative and fun,” Skipper said.
While politics can be divisive, Skipper said, sports brings people together.
“It’s what people talk about,” he said.
He remained confident that even in today’s golden age of television, amidst intense competition for sports contracts and viewership, there is only one faithful sports audience.
“There is no different audience; if you’re interested in sports, you’re watching ESPN,” said Skipper.
It was a self-confident statement. So confident in ESPN’s viewer base that it wasn’t long until one brave inquirer begged the question, “No one stays on top forever. What plans or concerns do you have about large segments of your audience going over to an alternate source for sports-related news?”
Skipper didn’t toss the question around for long. To him, the sports industry is not a pie getting smaller, but rather a market getting continually bigger as new means of distributing content opens up.
“Sports are ascendant,” he said. “Our goal is to grow our audience, not see it shrink in front of us.”
Expect to see original and premium content from ESPN into the foreseeable future.
Rae Martin is a Junior Reporter for Youth Journalism International